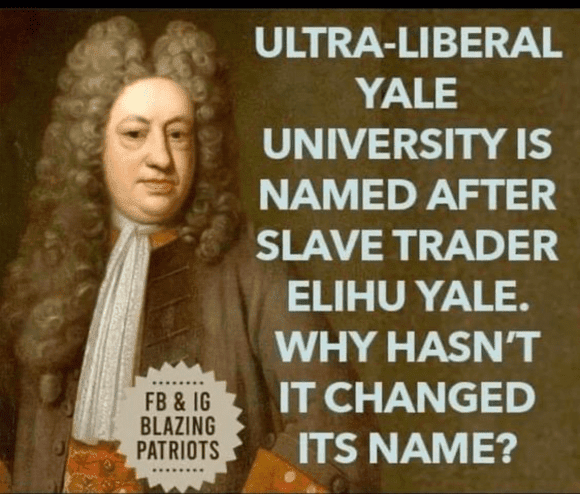 Elihu Yale was not only a slave owner but was also a slave trader. He made money from buying and selling human beings.

Elihu Yale (5 April 1649 – 8 July 1721) was an American born British merchant, slave trader, President of the East India Company settlement in Fort St. George, at Madras, and a benefactor of the Collegiate School in the Colony of Connecticut, which in 1718 was renamed Yale College in his honor.

The Yale family left Boston and returned to England when Elihu was three years old and he grew up going to school in London.

He succeeded a number of agents from Andrew Cogan to William Gyfford. Yale was instrumental in the development of the Government General Hospital, housed at Fort St. George

Yale amassed a fortune while working for the company, largely through secret contracts with Madras merchants, against the East India Company’s directive. By 1692, his repeated flouting of East India Company regulations and growing embarrassment at his illegal profiteering resulted in his being relieved of the post of governor.

Yale returned to Britain in 1699. He spent the rest of his life at Plas Grono in Wales, a mansion bought by his father, or at his house in London, spending liberally the considerable wealth he had accumulated.

Yale’s ancestry can be traced back to the family estate at Plas yn Iâl near the village of Llandegla in Wales.

The history of slavery spans many cultures, nationalities, and religions from ancient times to the present day. However, the social, economic, and legal positions of slaves have differed vastly in different systems of slavery in different times and places.

Slavery occurs relatively rarely among hunter-gatherer populations because it develops under conditions of social stratification. Slavery operated in the first civilizations (such as Sumer in Mesopotamia, which dates back as far as 3500 BC). Slavery features in the Mesopotamian Code of Hammurabi (c. 1860 BCE), which refers to it as an established institution. Slavery became common within much of Europe during the Early Middle Ages and it continued into the following centuries.

The Byzantine–Ottoman wars (1265–1479) and the Ottoman wars in Europe (14th to 20th centuries) resulted in the capture of large numbers of Christian slaves. The Dutch, French, Spanish, Portuguese, British and a number of West African kingdoms played a prominent role in the Atlantic slave trade, especially after 1600. The Republic of Ragusa became the first European country to ban the slave trade in 1416. In modern times Denmark-Norway abolished the trade in 1802.

Although slavery is no longer legal anywhere in the world (with the exception of penal labor), human trafficking remains an international problem and an estimated 25-40 million people were enslaved as of 2013, the majority in Asia. During the 1983–2005 Second Sudanese Civil War people were taken into slavery. Evidence emerged in the late 1990s of systematic child-slavery and -trafficking on cacao plantations in West Africa.

Slavery in the 21st century continues, with the top ten countries with the highest prevalence according to the Global Slavery Index being North Korea, Eritrea, Burundi, the Central African Republic, Afghanistan, Mauritania, South Sudan, Pakistan, Cambodia and Iran.

Although Mauritania criminalized slavery in August 2007, up to an estimated 600,000 men, women and children, 20% of the population of Mauritania, are currently enslaved, many used as bonded labor.

Islamist quasi-states such as the Islamic State of Iraq and the Levant and Boko Haram have abducted and enslaved women and children (often to serve as sex slaves).

Since we are changing and erasing history, let’s continue with Yale University.