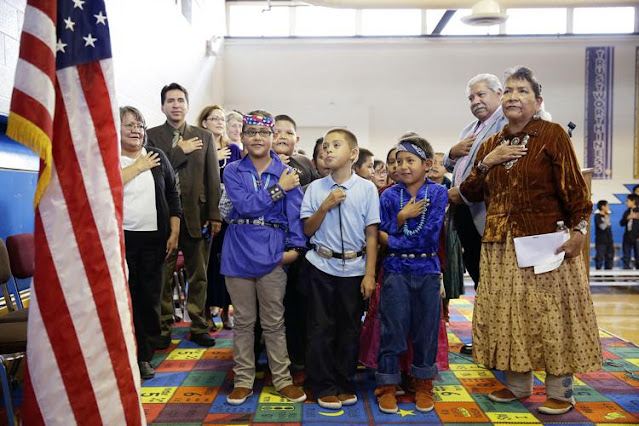 Students and faculty recite the "Pledge of Allegiance" during an assembly at the Crystal Boarding School in Crystal, N.M., on the Navajo Nation. -  John Locher | AP file photo

"Suppose a nation in some distant region should take the Bible for their only law book and every member should regulate his conduct by the precepts there exhibited. What a Utopia." – John Adams

The English Reformation took place in 16th-century when the Church of England broke from the authority of the pope. In 1527, when King Henry VIII requested an annulment and Pope Clement refused, Parliament abolished all papal authority and King Henry VIII became head of the Church.

This led to two centuries of violent disputes over religion. Anyone who refused to join the Church of England was denied civil liberties and rights. Freedom of religious worship was one of the major driving forces that drove people from Europe, especially England, to the ports of Plymouth Harbor.

Most of our founders were Christians and opened and closed each day of the Convention with a prayer. When they were writing our Constitution, they agreed there would be no national religion.

"Our rights to happiness don't come from government but a higher source – God." – John Dickinson

From our founding, through a Civil War and two Great Wars, Americans toted their bibles and guns into the bloodiest of battles to defend liberty, freedom and democracy around the world. After World War II, President Dwight D. Eisenhower, a melancholy Christian, added "one nation under God" to the pledge of allegiance.

It was not until 1962 when the New York school board approved an optional prayer to open class that prayer in school was challenged. Sixty years ago this week, in Engel v. Vitale, the Supreme Court declared school prayer unconstitutional. Engel became the lexicon to admonish all school prayer.

"Any prayer in our classrooms, voluntary or not, is a lesson in bad civics." –Steven Engel

Since the Supreme Court banned organized public school prayer, over the years this has been linked to numerous social ills and an increased decline in respect for authority in the classrooms. Sociologists agree, eliminating school-prayer put America on the road to moral and spiritual ruin.

Since our founding, in schools across the U.S., students stood at attention with their hands over their hearts reciting the Pledge of Allegiance. This tradition reminded students of the greatness of our nation and that America was "one nation under God, indivisible, with liberty and justice for all.”

Former NFL player Colin Kaepernick cited this case 73 years later to justify kneeling during the National Anthem. This outraged many Americans, including President Donald Trump, who still believed the promotion of good citizenship is a legitimate goal that should not be undermined for any reason.

"Every person in this nation has an obligation to honor the blessings of America." – Harlen Stone

Since the mid-1960s, every traditional American institution has been targeted for racism and bias toward some obscure group and considered unjust. All American traditionalism is called obsolete since it does not support declining moral standards of young Americans and is insulting to identity groups. There is something wrong with everything that made America the greatest nation on earth.

Since the federalization of union education in the 1970s and Common Core, teachers spend far less time teaching U.S. history, English, literature, sociology and civics, music, and art. Instead schools fixate on social justice, environmentalism, CRT, LGBT relationships and having safe sex. And this has led to declining test scores, social violence, and lost respect for America and her institutions.

Most universities have become secular seminaries for the dissemination of liberalism. Aside from indoctrination, students are learning little about living in traditional America. For example, one can earn a B.A. without taking one class in basic civics, U.S. or world history, or even in government.

Today's public school students are taught marriage is marriage and gender has nothing to do with it. Children can be raised by two mothers, or fathers or a single parent. A father nor a mother has nothing unique to offer a child. And single parent households can live off of government handouts.

It is a mortal sin to mention the "Bible" in a classroom. There are no moral truths because there is no religious basis for morality. During the Enlightenment, the Bible guided our founders in crafting Americas institutional values. Today they are being guided by a socially acceptable woke culture.

"Wokeism is a religion without salvation. Once canceled out you're banned forever." – A.E. Samaan

This last election proved that young voters, trendy women and identity groups do not care or vote for policy issues that are destroying the economy and are threatening their security. Election data from Edison Research shows the right to abortion on demand was the driving force for millennials, identity groups, and white female college graduates to vote for Democrats this last election. These groups also believed in canceling student loans, socialized medicine, and federalizing elections.

Democrats have held an advantage in every midterm or presidential election since the late 1990s. This year, citing Biden's stimulus spending, extended unemployment checks and his support for legalizing same sex marriage, Gen Z and young millennials showed a pronounced shift toward the Democratic Party. This group also showed the highest increase in voter turnout over last election.

Daniel O’Connell wrote, "Nothing is politically right which is morally wrong." At one time, Americans are taught to rely on their feelings to determine how to behave and what to believe in and what was wrong. Today, instead of being given moral guidance to develop a foundation for their moral future, children are being taught that anything is OK as long as you feel good about it. They are told it is OK to break the law if you feel it's unjust, and morality is a personal choice uncontrolled by society.

If we consider the issues that drove Gen Z and millennials to the Democratic Party last election are considered immoral, un-American, unreligious, and most were even illegal not that long ago, it is disturbing that we are witnessing the moral decay of American society and no one is doing a thing about it. Loss of respect for traditional values and out of control immorality destroyed Rome and it can happen here.

"There can be no high civility without a deep morality." – Ralph Waldo Emerson