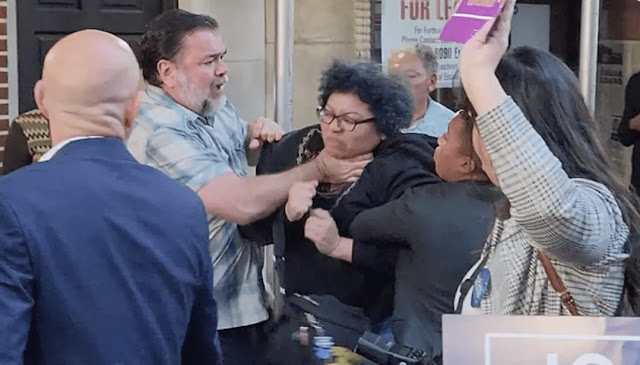 A video showing a white city councilmember choking a Latina woman at a New York City event has gone viral on social media. But the activist media isn’t covering it because she has the wrong political affiliation.

Angelica Torres, a supporter of Republican gubernatorial candidate Rep. Lee Zeldin, was demonstrating against Gov. Kathy Hochul at the event when she was attacked by a much larger man. The footage shows the individual with his hand around her neck, pushing her back.

Torres recounted the incident during an appearance on Fox News. She stated that an unidentified woman snatched her sign away and threw it.

“I was pretty much defenseless, outnumbered,” Torres said. “I was certainly shocked. I was definitely kind of like not expecting that to happen.”

“You know, we’re all very peaceful. And we were just there, just, you know, exercising our First Amendment,” she added. “And we just wanted our voices to be heard.”

The New York City Police Department claimed in a statement to Fox News that the man holding her by the neck “was actually helping her,” according to the host.

“I felt like my voice was trying to be silenced,” Torres continued. “I think it’s disgraceful what happened. You know, I think, you know, we’re supposed to have a middle ground where we can have agreements and have disagreements, but always be respectful.”

“I was there peacefully. I was there just voicing my opinion. And, you know, I didn’t want to hurt anyone,” she added. “I believe in freedom. And just because, you know, people try to bully me and intimidate me doesn’t mean I’m going to change my stance on, you know, my morals and my beliefs.”

An unidentified woman at the scene corroborated Torres’ version of the events according to The New York Post.

Of course, no arrests have been made in connection with the incident. Apparently, local law enforcement believes that wrapping one’s fingers around another person’s neck is helpful, not assault.

As of this writing, not a single left-leaning media outlet has bothered to cover this story. There has been no outrage over this incident coming from any Democratic influencers or politicians. No accusations of racism, which is story number 1,587,365, demonstrating that folks on the left do not care about political violence and their fixation on racism is completely insincere. But we already knew that, didn’t we? 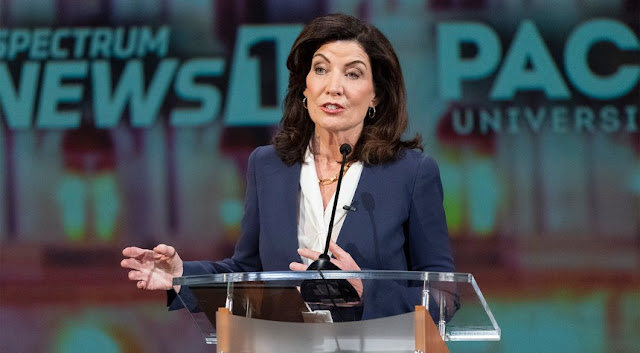 President Joe “showered with his daughter Ashley” Biden likes to whine that MAGA Republicans are “semi-fascists” and “threats to democracy.’ But we all know the left accuses us of whatever skullduggery they are up to.

A black woman showed up to protest at a rally for incumbent Democrat Gov. Kathy Hochul in Manhattan on Saturday, only to get choked by a white man. The video doesn’t show how the melee began but clearly shows a large, white man assaulting and choking a black woman who is supporting Republican N.Y. gubernatorial candidate Lee Zeldin.

Hochul appears to have cheered on the assault from the stage. “You can deny science. You can deny those who seek to vote! You can deny an election like those individuals,” Hochul screeched from the stage, referring to the counter-protesters, one of whom was being assaulted. “And we say, ‘hell no!'”

The woman was walked to an ambulance for medical treatment. Appallingly, the man was not arrested.

FACT-O-RAMA! NYC was happy to unite and identify “Central Park Karen” when she responded fearfully to a black man who had threatened her dog. The woman was fired from her job. Let’s see if New Yorkers are as eager to identify the white man who choked a black woman over her political beliefs.

Here is a closer look. Hopefully, New Yorkers are truly opposed to violent racism and identify this miscreant.

Despite Biden’s attempts to convince us that a lunatic with a pride flag in front of his home and a BLM sign in his window is a “MAGA extremist” who wanted to kill Paul Pelosi, most if not all of the political violence seems to be coming from the party of “tolerance.”

While the jury is still out on what might have provoked the attack on Paul Pelosi, we’ve seen a spate of violence against conservatives, none of which Biden has addressed:

FACT-O-RAMA! Biden did not visit Waukesha, Wisc., after a black supremacist ran over 67 white people, committing the worst act of domestic terrorism in years. But he did find time to call Kyle Rittenhouse a “white supremacist” after the teen defended himself against three white people who attacked him during an Antifa/BLM riot.

We can’t blame Biden for zipping his mouth about violence against conservatives. He and the Democrats have been trying fruitlessly to convince the nation that MAGA Republicans are the problem, despite the mountain of evidence suggesting otherwise.

Why wouldn’t liberals attack conservatives? We watched Antifa and BLM sally-Bois burn the country with near impunity. Almost half the arrestees had their federal charges dropped, compliments of “blue-collar” Joe Biden. What do the Marxists have to lose at this point?