The Establishment Is Trying to Divide and Conquer MAGA 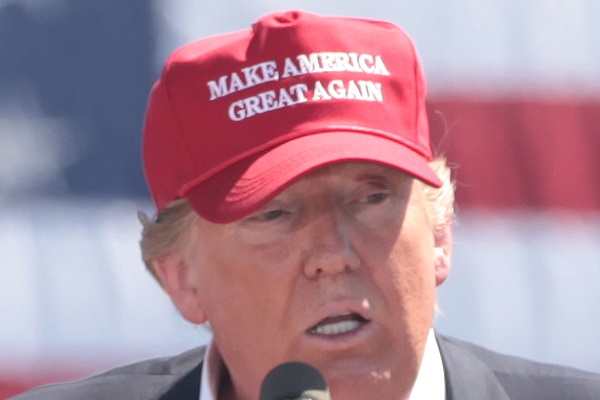 There are videos making the rounds showing President Trump standing on stage in Miami's pouring rain while imploring Americans to get out and vote.  The metaphor is striking.  There's Trump, battling the elements, lively as ever, refusing to give up, insisting on finishing what he's started.  Citizen Free Press appropriately notes that "President Trump is truly a force of nature."

I know that the months ahead will make for some spirited political debate among friends, but I encourage you to cement in your minds this quintessential image of Trump unbroken and unbowed.  Whatever else can be said about the man (and there is plenty), he remains the only leader in our times unafraid to stand alone.  When other self-proclaimed allies run the other way or look for somewhere safe to weather the approaching storm, Trump stands inside the tempest, demanding that it give up and surrender.  That's something that will forever separate him from those who pretend to be him.

It has become normal to deconstruct Trump's public appeal to something as basic as he fights!  Yet it is not just that Trump fights; it is why he fights that has attracted such a diverse voting coalition unlike any other political movement today.

Consider the Republican Party's consensus issues before Donald Trump descended the golden escalator and changed everything.  By and large, Republican politicians defended the endless wars in Afghanistan and Iraq without question. They ignored the harms of illegal immigration as a taboo issue equated with racism.  And they dismissed discussion of revitalizing American industry and manufacturing as unrealistic in a globalist system where cheap slave labor is plentiful overseas.

Republicans touted free trade, strong defense, and conservative values.  In practice, however, respect for free trade amounted to enormous international trade deals that often benefited multinational corporations and foreign financial titans at the expense of local American companies and their blue-collar workforces.  Military might consisted of waging wars with no discernible end in sight for aims that were frustratingly unclear.  And defense of conservative values remained, at best, wishy-washy and often resembled nothing more than a lackadaisical endorsement of the same secular values first practiced by a progressively more radical political left only years before.

Republican Party leaders and their corporate lobbyists essentially manipulated and shamed hardworking, family-oriented, religiously observant, patriotic Americans into believing that respect for "free trade" requires them to sacrifice their jobs and savings; that their love of country requires their families to fight unending and often unwinnable wars; that their humanitarian spirit requires them to welcome millions of foreign nationals pouring through America's lawless, open borders; and that their dedication to morality and virtue paradoxically requires them to abandon truth and embrace the progressives' secular faith.

This has been the Republican agenda for decades.  It encapsulates everything the Chamber of Commerce and Wall Street multinationals running the party desire — a cheap workforce both at home (illegal immigration) and overseas (offshore manufacturing); an American military enforcing global corporate hegemony; and a near-majority of the American people believing they are voting for freedom, prosperity, national self-defense, and traditional conservative values, when in actuality they are voting for corporate overlord stewardship committed to their diametrical opposites.

In defending America and Americans' direct interests and rejecting the globalist interests of a select planetary few, he shattered the D.C. Uniparty's illusion of political disagreement and its shared commitment to a deeply un-American status quo.  In the process, he attracted a powerfully robust coalition of American voters from all walks of life.  His stated policies and objectives appealed directly to Americans' minds, regardless of the colors or kinds of bodies those minds called home.

This is what makes President Trump so dangerous.  MAGA is the biggest political coalition in the country.

For the D.C. Uniparty to survive, MAGA must be destroyed.

Everything else that the Establishment Class has fraudulently peddled against Trump — that he's imperious, mercurial, uncouth, unworthy to hold office, a Russian spy, a warmonger, an insurrectionist, a "denier," a criminal — is nothing but an endless barrage of psychological warfare directed against MAGA voters and constructed of propaganda and lies.  At heart, Trump's only "crime" is that he remains for America and against the totalitarian globalist system designed to subdue her once and for all.

MAGA, in other words, is a direct threat to the international coalition that insists on extinguishing American independence and freedom.  For at least six years, the Establishment Class has worked to demolish not so much Donald Trump, but rather the assembly of MAGA Americans that have found each other and are now working together.  The Uniparty has used all its tricks and sticks.  It has tried shaming Christians.  It has called Trump's supporters "Russian sympathizers."  It has used the criminal (in)justice system to bully, harass, and imprison Trump allies.  It has slandered MAGA voters as "terrorists," "insurrectionists," "fascists," and "racists."  It has done everything it can to wear the MAGA coalition down, to abuse Trump-supporters so completely that they renounce him, and to intimidate the MAGA faithful so mercilessly that they relinquish their political sway.  The Establishment Class has done this because MAGA represents an existential threat to its paradigm of global wealth and power.

With this in mind, as we venture forth down the 2024 road to the White House, do not forget that the Establishment's most important goal is to obliterate MAGA and lull Americans back to their previous pro-globalist slumber.  Billionaire investor Ken Griffin, who has invested heavily in Governor DeSantis, has said so explicitly.  According to Politico, the big Republican donor wants to "blunt the vein of populism that has complicated the party's relationship with the corporate world."  Think about those words for a second.  Griffin and his Establishment Club friends want the American people to stop voting for things in their own best interest and return to a time when they voted for things in the best interest of the small, insular, privileged, corporate few.  Isn't it strange that "elites" defend "democracy" only when the few at the top of the economic pyramid get their way but always denounce as vulgar "populism" anything like the MAGA movement that pursues the broader wants and needs of the American people?

There's an awful lot I like about Ron DeSantis, but when he is backed by Paul Ryan, Jeb Bush, the Lincoln Project, and big-money anti-MAGA donors like Ken Griffin, I see only two possibilities: (1) either they think that Governor DeSantis will eventually play ball with the Über-Globalists or (2) they are committed to dividing the MAGA coalition between DeSantis and Trump, conquering MAGA once and for all, and forcing voters back to the Establishment-approved, corporate Republicanism embraced by the likes of Mitch McConnell, Kevin McCarthy, Asa Hutchinson, Larry Hogan, Tim Scott, and Nikki Haley.

I reject any path forward that forfeits hard-won MAGA victories, empowers the anti-American globalists, or returns total uncontested power to the Uniparty "elites" running D.C.  Fighting the unholy alliance uniting Marxism, corporatism, and global totalitarianism is too important.  And saving the MAGA coalition from the Machiavellian strategists seeking its destruction remains too critical.

Excellent article. I have been disturbed the last few days by "conservative journalists" criticizing the former president for nicknaming Ron DeSantis. First, I like Ron DeSantis and think he is doing a great job in FL, but he is being groomed by the Republican establishment to run in 2024. The party is split and it is just as appropriate for DJT to call out the establishment members as it is for Mitch McConnell to call out Maga voters. Besides, it is a very clever nickname and well deserved. 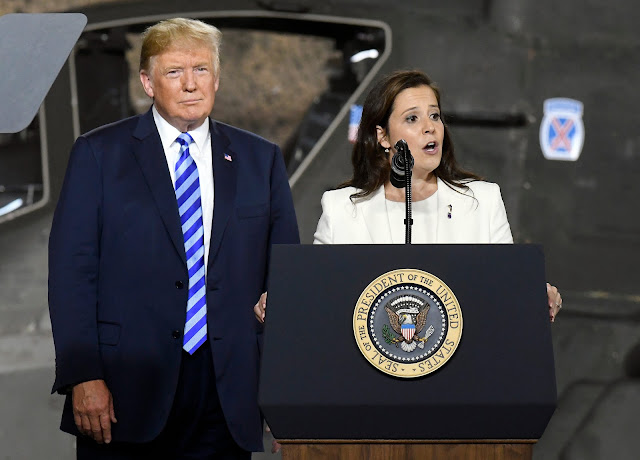 Stefanik released a statement as Trump said last week that he would very soon announce his candidacy for president in 2024. The New York Times initially broke Stefanik’s endorsement for Trump. Stefanik explained her reasoning in a statement to Breitbart News.

Stefanik is the first member of the House or Senate leadership to endorse Trump’s bid for president.

The Associated Press (AP) has not officially declared that Republicans have won the House majority.

She continued, saying that Trump would easily defeat any potential Republican primary challengers and that under Trump, America was far more safe, secure, and prosperous.

“I am proud to endorse Donald J. Trump for President in 2024. I fully support him running again. Under his presidency, America was strong at home and abroad, our economy was red hot, our border was secure, our neighborhoods were safe, our law enforcement was respected, and our enemies feared us,” Stefanik said. “We cannot afford another four years of Joe Biden’s failed policies that have led to the inflation crisis, border crisis, and crime crisis. It is time for Republicans to unite around the most popular Republican in America, who has a proven track record of conservative governance. Poll after poll shows that President Trump would defeat any Republican challenger by massive margins, and would beat Joe Biden if the election were held today. President Trump has always put America First, and I look forward to supporting him so we can save America.”

Trump teased his potential Republican presidential announcement during a rally in Sioux City, Iowa, on November 4.

Stefanik has said that House Republicans will repeal 87,000 IRS agents hired under President Joe Biden on the first day that Republicans take back the House.