Hillary Clinton's 'war on women' attacks will ring hollow with her campaign putting her husband on the trail. The Wall Street Journal editorializes: Against Republicans, she'll play the "war on women" theme non-stop. Yet no one in American politics better personifies a war on women than Mrs. Clinton's husband … Mr. Clinton was a genuine sexual harasser in the classic definition of exploiting his power as a workplace superior, and the Clinton entourage worked hard to smear and discredit his many women accusers … No wonder that Ruth Marcus, the Washington Post columnist and no conservative, called Bill Clinton's record with women a fair political issue. At the very least if Mrs. Clinton wants everyone to forget about Bill's harassment of women, she ought to stop playing the sexism card, or drop Bill as surrogate, or both.
-----
Glenn Reynolds on

Since Hillary announced that her husband would be joining her on the campaign trail, people have been debating whether or not it's fair for the GOP to attack Bill's sexual misdeeds in order to indirectly attack her.
This makes sense. After all, we're talking about a guy who has been accused of the sexual assault of more than ten women. Think about it: How is her appointing him really any different than if she'd appointed Bill Cosby?
But here's the thing: The real issue isn't whether or not to attack Bill &66to indirectly attack Hillary — it's about directly attacking Hillary for how she herself treated the women involved. Hillary Clinton claims to be pro-women, yet has actively worked to ruin lives of so many of them. She's running on a "feminist platform" — she's even dared to say that sexual-assault survivors have a "right to be believed" — despite the fact that what she did to the women who accused Bill went far beyond not believing them. She attacked them. When allegations of sexual misconduct emerged during Bill's 1992 presidential run, she's reported to have said "Who is going to find out? These women are trash. Nobody's going to believe them." Multiple people also report that she called the women "sluts" and "whores" — you know, for daring to be raped. A private investigator named Ivan Duda claims that, after Bill lost his second governor's race, Hillary told him: "I want you to get rid of all these b****** he's seeing . . . I want you to give me the names and addresses and phone numbers, and we can get them under control."

She's a real charmer, that one.

More importantly, times have changed and morality with it. I don't think Bill, and certainly Hillary, would want Juanita Broaddrick brought up at a time when, on our campuses,  even an unwanted kiss is legally considered rape, thanks to Title IX. Can you imagine how many instances of what is called "unwanted touching" could come out of the woodwork now if Bill started to pick a fight with Trump? It's hard to imagine Clinton making it through Georgetown or Yale Law under today's rules, or even through his freshman year.
The truth is Bill's relationships with women are the product of another era, one that is fading remarkably fast in the rear view mirror.  There is little tolerance these days for his kind of behavior — no more winking — not in the USA anyway.  Clinton's well known hypocritical wagging of the finger at the television to swear to us that he "never had sexual relations with that woman, Miss Lewinsky" may not have looked terrific back when he did it, but today it would seem downright repellent.  Imagine it being played again and again next to a Hillary commercial.
Doubtless Donald Trump has not been a saint, but there is a big difference between him and Bill.  The Donald may often be rude.  He may be a thin-skinned bloviator.  But he's not a creepy hypocrite.  In that sense he's the opposite of the Clintons, both of them.
Lastly, what if Trump were to raise the Jeffrey Epstein case?…. whoa.

---
Donald Trump turned the tables on NBC News' Savannah Guthrie when she tried
to frame Bill Clinton's affair with Monica Lewinsky as an "alleged" incident.
The "Today" show had the Republican presidential front-runner on live Tuesday to discuss his decision to highlight the sordid past of Hillary Clinton's husband. It wasn't long before Guthrie was on the defensive.
"You mention Monica Lewinsky," Guthrie asked. "Are you saying an alleged extra-marital affair, that of course he has now admitted, is that fair game?"
image: http://www.wnd.com/files/2014/05/monica-lewinsky-vanity-fair-600.jpg 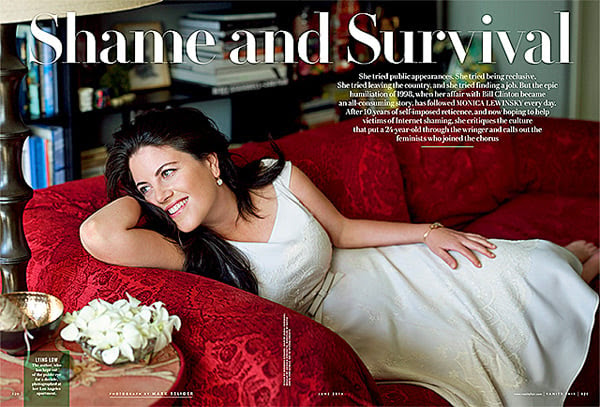 Monica Lewinsky in the May 8, 2014, online issue of Vanity Fair
"Is it alleged? I don't think that's alleged," Trump responded.
"No, he's admitted it, he's admitted it," said Guthrie.
What do YOU think? Why don't news media understand Donald Trump's appeal? Sound off in today's WND poll
"If he's admitted it, you don't have to use the word alleged," said Trump.
"Right, exactly," the NBC host conceded. 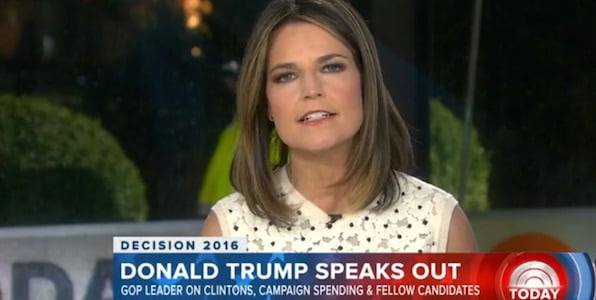 NBC News' Savannah Guthrie was corrected by Donald Trump on Tuesday when she said former Bill Clinton's affair with Monica Lewinsky was "alleged."
Trump has been under fire since last week by Clinton's supporters for saying her 2008 campaign was "schlonged" by President Obama.
"She was going to beat Obama. I don't know who would be worse, I don't know, how could it be worse? But she was going to beat – she was favored to win – and she got schlonged, she lost, I mean she lost," the billionaire said Dec. 21 at an event in Grand Rapids, Michigan, WND reported.
See Donald Trump's exchange with NBC's Savannah Guthrie:
Trump told Guthrie that attempts by the former secretary of state to portray him as a sexist will be countered by discussions on her husband's treatment of women.
"You look at whether it's Monica Lewinsky or Paula Jones or many of them – that certainly will be fair game. Certainly, if they play the woman's card with respect to me, that will be fair game."

Hillary Clinton watches as President Clinton discusses the Monica Lewinsky scandal at the White House in January 1998.
Some of the sexual stories and allegations Trump may bring up, besides Bill Clinton's affair with his former intern, include:
The Democrat front-runner is likely to face increased scrutiny of her husband's behavior toward women whether her campaign backs off Trump or not. Clinton was already cornered at a New Hampshire campaign event Dec. 3 and asked if women who accused her husband of sexual assault should be believed.
"You recently came out to say that all rape victims should be believed, but would you say that about Juanita Broaddrick, Kathleen Willey and Paula Jones? Should we believe them as well?" an audience member asked, WND reported.
"Well, I would say that everybody should be believed at first until they are disbelieved based on evidence," Clinton replied.
Juannita Broaddrick reveals rest of the Clinton rape story. "'Their Lives: The Women Targeted by the Clinton Machine'"
The former secretary of state had previously tweeted Nov. 22, "Every survivor of sexual assault deserves to be heard, believed, and supported."
Posted by Frances Rice at 12:17 PM