Chelsea Schilling is a news and commentary editor for WND and a proud U.S. Army veteran. She has a bachelor's degree in journalism and also worked as a news producer at USA Radio Network and as a news reporter for the Sacramento Union. 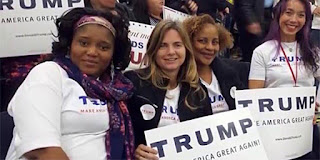 GOP nominee Donald Trump is experiencing an eye-popping surge in support among black Americans in Florida – the biggest prize of all the battleground states – according to a new poll.

Trump has attracted the backing of a full 20 percent of black Americans in Florida, a poll by Florida Atlantic University and the Economics Polling Initiative found.

Trump took an overall lead in the state, 43 to 41 percent, within the poll's 2.7 percent margin of error.

While Clinton takes the largest share of African-American voters, Trump's numbers are noteworthy because Republican candidates have failed to capture more than 13 percent of the black vote in the state in at least 24 years:

The new Florida poll was conducted just two days after Trump made his pitch to black Americans during an Aug. 17 speech in Milwaukee, Wisconsin. 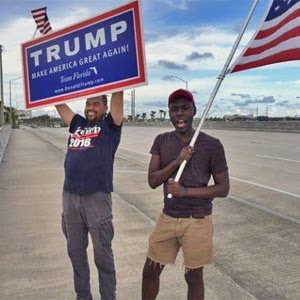 "We reject the bigotry of Hillary Clinton which panders to and talks down to communities of color and sees them only as votes, not as individual human beings worthy of a better future," Trump said in his Wisconsin speech.

"She doesn't care at all about the hurting people of this country, or the suffering she has caused them. The African-American community has been taken for granted for decades by the Democratic Party. It's time to break with the failures of the past – I want to offer Americans a new future."

That speech came just two days after riots rocked black neighborhoods in the Milwaukee area. The candidate urged blacks to embrace law and order, which was the main theme of his speech.

"The main victims of these riots are law-abiding African-American citizens living in these neighborhoods," Trump declared. "It is their jobs, their homes, their schools and communities which will suffer as a result. There is no compassion in tolerating lawless conduct. Crime and violence is an attack on the poor, and will never be accepted in a Trump administration."

Have you ever wondered what African Americans want, and why they vote Democratic? Do you know how slavery actually began in America? Ben Kinchlow's best-selling book "Black Yellowdogs" breaks race and politics down in black and white. Get your copy today!

Clinton has reportedly spent more money on TV ads in Florida than any other state. In early August, CNN reported she outspent Trump $20 million to $1.6 million there.

And Trump is still ahead.

If the most recent numbers are accurate, they could help explain Clinton's sudden and fervent efforts to tie Trump to the KKK and white supremacists through a new advertising campaign.