This was the administration that was going to bring America together – the one headed by America’s first black president.
Instead, it has been the administration that has polarized America more than any since the Civil War.
And it has not just been Barack Obama responsible.
His wife has been even more vitriolic in her vicious, unwarranted attacks on her country.
Remember, it was Michelle O. who told us during the campaign in 2008: “For the first time in my adult lifetime, I’m really proud of my country … not just because Barack has done well, but because I think people are hungry for change. I have been desperate to see our country moving in that direction and just not feeling so alone in my frustration and disappointment.”
First time?
Amazing.
She’s been a piece of work ever since.
She topped that last weekend during a commencement address at City College in New York when she launched what was perceived by many in the media as an attack on Donald Trump and America’s intolerance of “diversity.”
She’s said: “It’s the story that I witness every single day when I wake up in a house that was built by slaves. And I watch my daughters, two beautiful black young women, head off to school, waving goodbye to their father, the president of the United States, the son of a man from Kenya, who came here to America for the same reasons as many of you, to get an education and improve his prospects in life.”
Thanks for reminding us, Michelle.
We all needed to be reminded of America’s history with slavery one more time.
That’s just what we needed.
Was she correct?
Yes, slaves from Virginia and Maryland, two solidly Democratic states at the time (Maryland remains so), I might add, were used to complete the building of the White House, when paid laborers were in short supply.
America was short on labor in 1792. There was an effort to import European laborers to complete the project, but that effort fell short. So slaves were used.
I might note there was no Republican Party at the time.
Abraham Lincoln was the first Republican president some 68 years later. He ran on an anti-slavery platform and won. It was Republicans who freed the slaves.
For another 100 years, however, it was the Democratic Party – Barack and Michelle Obama’s party – that fought integration and civil-rights legislation. The Republican Party championed it.
The Ku Klux Klan was the armed militia of the Democratic Party – lynching almost as many white Republicans as they did innocent blacks after the War Between the States, in which more Americans died than any other war in which Americans (white and black) have fought.
Do we really need another slavery lecture from Michelle Obama – a woman raised in privilege from birth and who has lived like a queen for the last eight years at the expense of white and black Americans? 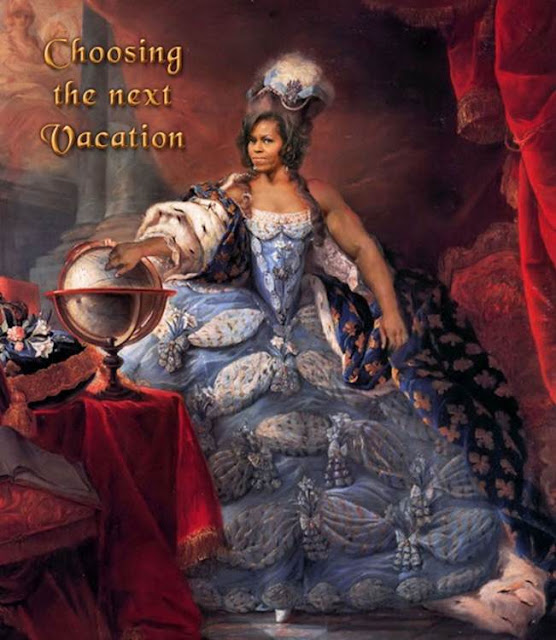 
The First Blacks In Congress – All Republicans