"We will once more have a government of, by and for the people.” - Donald J Trump 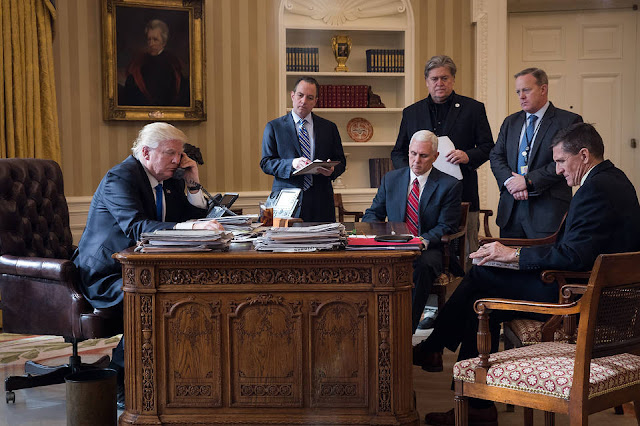 
A Sample Of Presidential Actions


'This Is Political Violence': Milo Yiannopoulos Talks to Tucker About Berkeley Riots 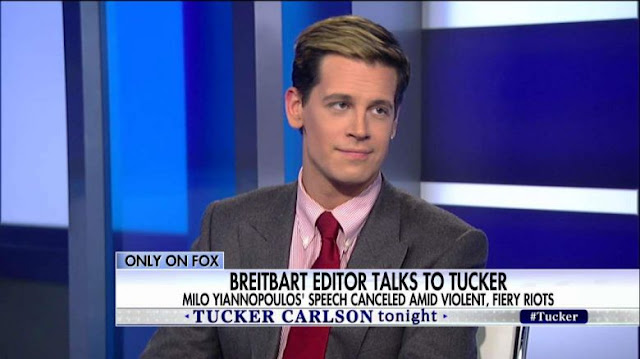 One night after violent protests erupted at the University of California-Berkeley before his scheduled speaking engagement, conservative activist and journalist Milo Yiannopoulos joined Tucker Carlson to discuss the incident.


Yiannopoulos, a Breitbart News editor, said he was preparing for his speech on the campus Wednesday night when the ground floor of the building was stormed by protesters, violence broke out, and he was evacuated by his security detail. 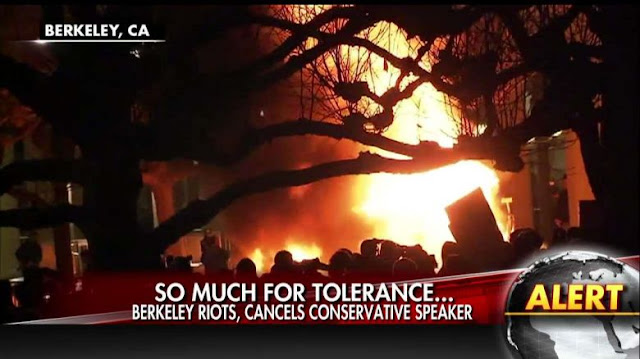 "That is the price you pay for being a libertarian or a conservative on American college campuses," Yiannopoulos said.


He argued that the mainstream media helped create this environment on college campuses by labeling ordinary conservatives "white supremacists," "anti-Semites," "racists" and "sexists" when they're not.
"There's an inevitable, obvious consequence to this," Yiannopoulos said. "The media has created this environment in which it's OK to say almost anything about somebody who is right of Jane Fonda."
He said that people should have to answer for this "political violence," because it's only going to get worse.
"The establishment - the media, academic and entertainment establishment - has made certain sorts of political opinion - respectable, reasonable, mainstream opinion - impossible to express in public." 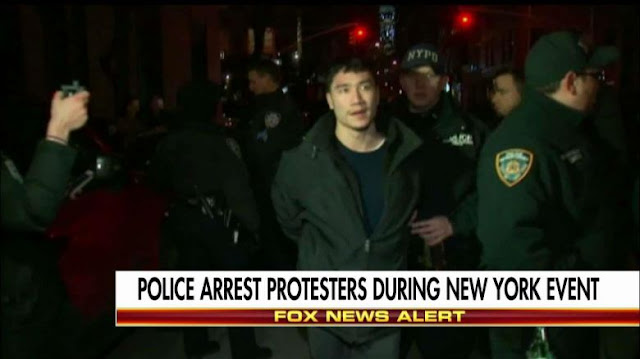 When people started tweeting at me about this incident, my first instinct was to question whether they could possibly be characterizing the situation accurately.


I don’t know why: Between this week’s disgrace in Berkeley – replete with atrocious public statements from various Democratic public officials – and this mind-bending lowlight from last year’s unrest at the University of Missouri, nothing should surprise any of us at this point.
Scroll ahead to roughly the ten-minute mark and watch an “adult” NYU professor berate NYPD officers for not using physical violence against Trump supporter and Milo-esque ‘alt-right’ figure Gavin McInnes.
Welcome to the insane new “normal,” as End of Discussion marauders further lose all semblance of composure in the era of Trump.
They don’t seem to realize that their pathetic, bullying hysterics helped elevate Trump in the first place, and that their continued beclownment helps discredit his opposition.
Good work all around, gang (severe content warning):


“You are f**king a**holes!” the professor shouted at the New York Police Department (NYPD). “You’re protecting the Nazis!” The NYPD had arrived on the scene to prevent violence and escort McInnes out of the building safely. But the professor seemed to think the cops’ job was to shut down a speaker she didn’t like—by engaging in explicit violence against him. “You should kick their ass!” the professor declared, referring to McInnes and his entourage. “You should!” Note that the professor—a dead ringer for Melissa Click, by the way—considered violence to be beneath her and her owns students. “These are kids who are trying to learn about humanity!” she said. “They’re trying to learn about human rights and against racism and xenophobia, and LGBTQ rights, and you’re letting these f**king neo-nazis near here! It’s not up to these students to kick the ass of a neo-nazi! They don’t have to raise their fist! They were taught to be peaceful! F**k you!” So according to the professor, it’s college students’ job to contemplate humanity and practice tolerance, and it’s the cops’ job to beat up people with whom the left disagrees.
Snarks Allahpundit, “nothing says “anti-fascism” like demanding that the state physically attack your political opponents.”
This echoes the point I made yesterday in this post, and on TV.
The so-called opponents of fascism often seem awfully enthusiastic about fascism in the name of silencing or brutalizing people with whom they disagree.
I don’t endorse the Milo/McInnes approach to politics or discourse, but the idea that they’re “Nazis” is absurd.
And even if they were modern-day Nazis, the First Amendment affords them quite a wide berth to assemble nonviolently and speak their minds – and the job of the police is to protect that speech, not crack skulls because some dimwit left-wing professor is angry that she can’t outsource the desired bloodshed to agents of the State.
These people might as well be cutting checks to Trump’s re-election campaign.
But hey, love trumps hate, etc.


http://townhall.com/tipsheet/guybenson/2017/02/03/video-unhinged-nyu-professor-shrieks-at-nypd-to-beat-up-trump-supporters-n2281109?utm_source=thdailypm&utm_medium=email&utm_campaign=nl_pm&newsletterad=
Posted by Frances Rice at 10:47 AM