Paris police say a security operation is under way near Notre Dame Cathedral and are urging passers-by to stay away from the area.


A policeman was attacked by a hammer and responded with gunfire, this can’t be verified for the moment.


Some tweets have come out saying people are trapped momentarily in the cathedral.


It is understood that the assailant has been shot but not dead.


Large numbers of police cars filled the area on the Ile de Cite Island in the River Seine in the center of Paris.


Paris is under high security after a string of Islamic extremist attacks in recent years.


British authorities name 22-year-old Youssef Zaghba, who is believed to be an Italian national of Moroccan descent, as the third assailant in the weekend terror attack that left 7 dead. Authorities say he is from east London and he was not a “subject of interest” to police or intelligence services. 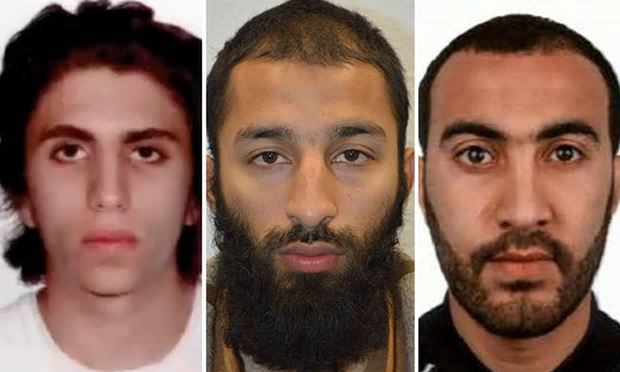 News Stories Having Nothing to Do With Islam


By John Hinderaker
The terror attack on the London Bridge had nothing to do with Islam. In that respect, it had a lot of company: the news is full of stories having nothing to do with Islam. Here are a few from today’s papers. A much longer list could easily be compiled.
*****
The Associated Press reports on “Stories from London attack survivors.”
Daniel O’Neill, 23, had just stepped outside a pub near Borough Market when he was attacked, his mother, Elizabeth, told reporters Sunday outside Kings College Hospital in London.


“A man ran up to him and said ‘This is for my family, this is for Islam,’ and stuck a knife straight in,” she said. “He’s got a seven-inch scar going from his belly round to his back.”
*****
A guy named Abz, said to be the leader of the London terrorists, was featured in a British television documentary called “The Jihadis Next Door.”
﻿


The Arsenal kit wearing ringleader of the London Bridge terror attack posed with a jihadi flag on Channel 4 documentary The Jihadis Next Door, was thrown out of a mosque and tried to radicalise kids in his local park in the years ahead of the devastating atrocity.
This is a still from The Jihadis Next Door: 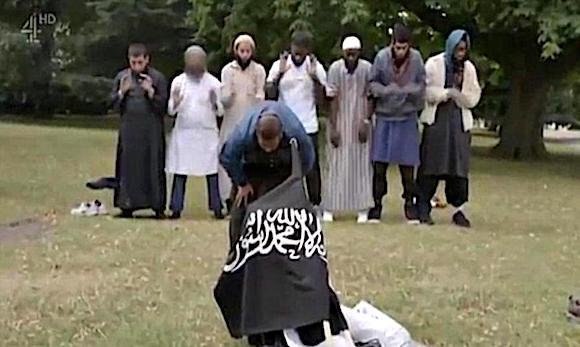 I think we can say without fear of contradiction that the British have failed to take the threat of Islamic terrorism seriously enough. But really: the jihadis next door?
*****
Now we move to Spain, which also sometimes produces stories having nothing to do with Islam. This incident took place at a Christian wedding:
Last Saturday, a 22-year-old man interrupted a Catholic wedding in the San Pablo Church in Valladolid, Spain, when he ran inside, shouted “Allahu Akhbar,” and attacked the priest. The shocked couple could do nothing but watch in sheer amazement at what was happening.
The priest who blessed the wedding explained afterward that a “group of young troublemakers” started making noise at the back of the church. Next, one of the “young people” shouted “Allahu Akhbar” and charged the altar. “A lot of people,” the priest went on to explain, “including the bride’s mother, were crying, and there were people who had already jumped out of the pews because we did not know whether this person came alone or not, or if he was armed.”
You can see what happened in this tweet. Fortunately, the custom of having groomsmen on hand saved the day:
Finally to Poland, where the news of the day actually does have nothing to do with Islam. Happily. The YoungCons offer this graphic on Instagram. It shows terrorist attacks in Europe: 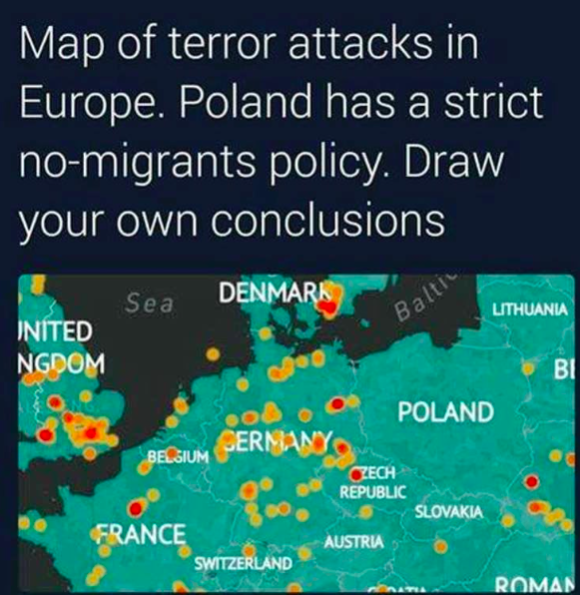 Poland’s European Parliament deputy Ryszard Czarnecki explains:
Czarnecki, who hails from Poland’s conservative Law and Justice (PiS) party, said terrorist attacks were often carried out by children of “Islamic migrants” – many of them citizens of European countries – who were trained by the so-called Islamic State.
“Other countries have led to a situation in which those trained on Islamic State territory in Syria, Iraq – young people with French, Belgian, Dutch, British, German citizenship – return to Europe … and somehow [the authorities] were incapable of monitoring them,” Czarnecki said.
“We, Poland, are learning from the mistakes of others … and we will not open our doors to Islamic migrants,” he added.
The Democratic Party’s judges have held that unlike Poland, the U.S. is not permitted to learn from the mistakes of others, even in order to implement an immigration and travel policy nowhere near as restrictive as Poland’s.
As a matter of law, these decisions are absurd, but they represent the political position of the judges’ party, the Democrats.
It doesn’t take a lot of foresight to see that the United States is condemned to experience many more news stories that have nothing to do with Islam.
Will the Democratic Party, in consequence, pay a severe price? I suspect that it will, yes.
http://www.powerlineblog.com/archives/2017/06/news-stories-having-nothing-to-do-with-islam.php
Posted by Frances Rice at 11:17 AM