By Frances Rice
As author Michael Scheuer wrote, the Democratic Party is the party of the four S’s: slavery, secession, segregation and now socialism.
In contrast, as one pundit wrote, the Republican Party is the party of the four F’s: faith, family, freedom and fairness.
From the inception of the Republican Party in 1854 as the anti-slavery party until today, Democrats have viscerally opposed the values of Republicans.
Imbued with deep-seated hatred of Republicans, Democrats started the Ku Klux Klan in 1866 that became the terrorist arm of the Democratic Party.
The Klan killed over 3,000 Republicans, 1000 white and over 2,000 black Republicans.
In his book, A SHORT HISTORY OF RECONSTRUCTION, Dr Eric Foner wrote:
“Founded in 1866 as a Tennessee social club, the Ku Klux Klan spread into nearly every Southern state, launching a ‘reign of terror‘ against Republican Party leaders, black and white.
“In effect, the Klan was a military force serving the interests of the Democratic Party, the planter class, and all those who desired the restoration of white supremacy.
“Jack Dupree was a victim of a particularly brutal murder in Monroe County, Mississippi.
“Assailants cut his throat and disemboweled him, all within sight of his wife, who had just given birth to twins.
“Jack Dupree was ‘president of a Republican club‘ and known as a man who ‘would speak his mind.’”
Today, Democrats continue their reign of terror against Republicans, as demonstrated in the below article.
___________________

We know this but they are saying it, they are telling us with impunity.
They want a civil war or surrender.
Below is an alarming article.
______________
IN THEIR OWN WORDS: ANTI-TRUMP ‘RESISTANCE’ LEADERS SAY THEY WANT TO MAKE AMERICA ‘UNGOVERNABLE’
By Peter Hasson 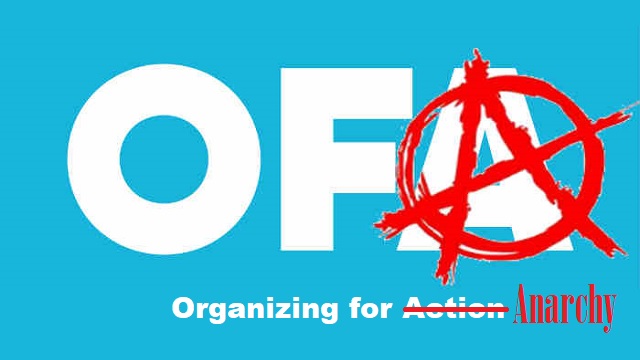 Behind the mass protests, choreographed chants and acts of violence, leaders of anti-Trump “resistance” efforts are communicating the same simple but dark message: they want to make America “ungovernable” for the president of the United States.
These protesters say they will do whatever it takes to keep Trump from enacting his agenda, and many of them have shown a willingness to destroy public property, assault law enforcement officers and inflict violence upon their fellow citizens.
In the days and weeks leading up to the inauguration, DisruptJ20 publicly advertised an invitation to “Join us in refusing to normalize Trump’s presidency, smashing his facade of legitimacy.”
DisruptJ20 advocates using “direct action” tactics, which the group describes as taking “collective action to make social change without giving power over to an authority or middle person.”
“We don’t ask permission or put our faith in electoral politics, instead, we use our bodies to stop the smooth operation of the system we oppose,” the group’s website states, citing Black Lives Matter’s efforts to shut down highways as an example of the kind of disruption they have in mind. The group is open about its aim to become “an ungovernable force this winter.”
A website called Ungovernable 2017 helped coordinate DisruptJ20’s DC efforts with anti-Trump protests around the country. Some groups endorsed a pledge to never give Trump the “chance to govern.”
“As we resist, we will create new governing institutions, new economic relationships, and new ways of being human,” the pledge reads.
The pledge was endorsed by a number of left-wing figures including: the Malcolm X Grassroots Movement, a black nationalist organization with chapters in eight cities across the country; activist and 2008 Green Party vice presidential nominee Rosa Clemente; and Lamis Deek, lawyer and a New York board member for the Council on American Islamic Relations (CAIR).
Mass demonstrations against Trump have continued around the country in the weeks since his inauguration. Over a week ago featured an activist calling for murder over a megaphone. The activist, reportedly associated with the Black Lives Matter movement, said that protesters “need to start killing people” and “start killing the White House.”
Milo Yiannopoulos, an editor at pro-Trump website Breitbart, was forced to cancel a speech at UC Berkeley last week after mobs of protesters started fires, assaulted bystanders and pepper sprayed suspected Trump supporters as part of an organized effort to shut down the speech. 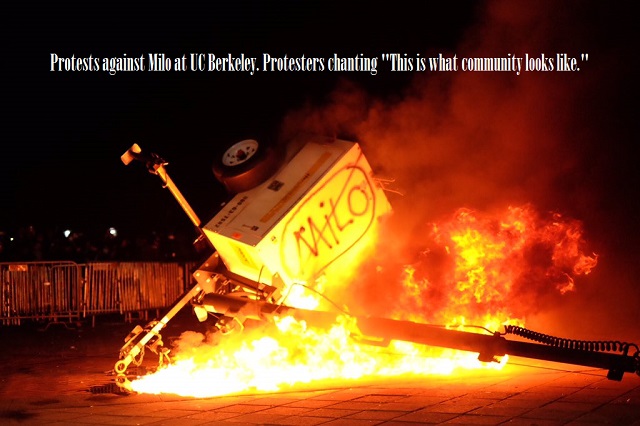 Those protests were spear-headed by a national group calling themselves Refuse Fascism. The group is open about its apparent alliance with Princeton professor and DNC platform committee member Cornel West, who is listed as one of Refuse Fascism’s “initiators.” A spokesperson for West did not return a request for comment.
Video posted to Refuse Fascism’s Facebook page last week features one of the group’s leaders whipping a throng of protesters into a frenzy with calls of revolution. “We need to make this country ungovernable,” she declares. “We need to do what the German people should have done when Hitler was elected.” 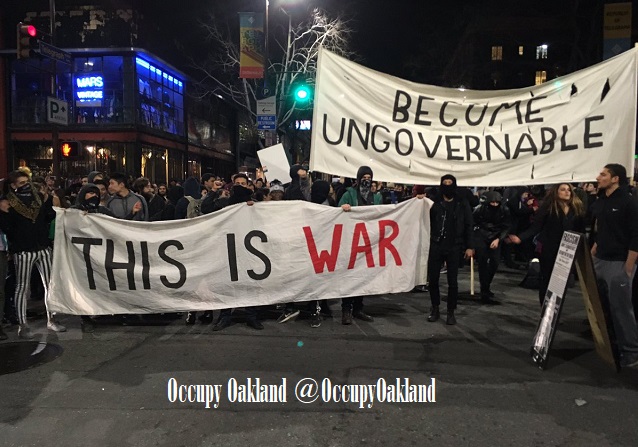 Far-left activist group Occupy Oakland also took part in last week’s Berkeley riots. The group, a local spinoff from the 2011 Occupy Wall Street protests, declared victory after Milo’s speech was cancelled due to their mob-like tactics. The group circulated a picture on Twitter of two of its banners from the protest reading, “Become ungovernable” and “This is war.”
“We won this night. We will control the streets. We will liberate the land. We will fight fascists. We will dismantle the state,” Occupy Oakland captioned the photo. “This is war.”
RELATED ARTICLE: 15 Times Celebrities Envisioned Violence Against Trump and the GOP
EDITORS NOTE: This column originally appeared in The Geller Report.


http://drrichswier.com/2017/06/23/anti-trump-resistance-aims-to-make-america-ungovernable/
Posted by Frances Rice at 9:42 AM