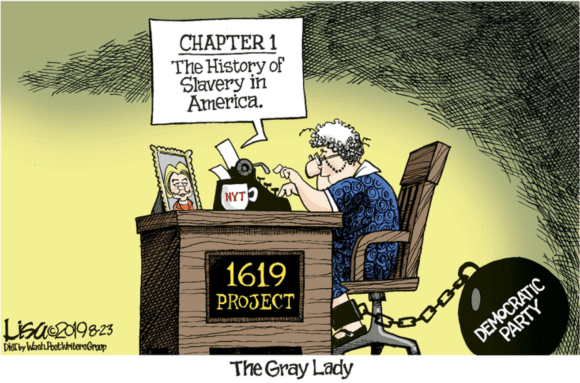 The New York Times started a “1619 Project” by stating that the project “aims to reframe the country’s history, understanding 1619 as our true founding, and placing the consequences of slavery and the contributions of black Americans at the very center of the story.”

As is demonstrated in the below articles, the real objective of the 1619 Project is to recast America's history as something hideous with a hypocritical facade of goodness.

The 1619 Project’s historical retelling runs counter to the better, truer story of America.

In fact, our nation was founded on good and true principles, realized at the cost of the blood, sweat and death of many Americans—black and white.

Ex-slave Frederick Douglass stated that American history remains the most honest, as well as the most visionary.

Douglass acknowledged that Independence Day for the American slave represented "more than all other days in the year, the gross injustice and cruelty to which he is the constant victim."

Douglass recognized the Constitution as a "glorious liberty document" and the Declaration of Independence as a charter of "saving principles."

A new Ebook, “Black History 1619 to 2019” by Sandra K. Yocum with a release date of December 15, 2019, relates the truth about the African-American experience from the era of slavery until modern times. This Ebook is packed with fact-based information and primary source references from the Library of Congress and other educational institutions around the country.

Here is a link to the website with additional information: www.itsmorningagain.com.

It will be published by Paragon House and according to the company’s website: https://www.paragonhouse.com/wp/

“Paragon House lives by its motto, Home of Books That Make a Difference. It publishes serious non-fiction books that will enable readers to improve themselves and their societies. Read our blog articles about how our books make a difference."

A FOOTNOTE TO TRANSATLANTIC SLAVERY, VISUALIZED

Mark Perry of the American Enterprise Institute was inspired by our post Slavery? We Were a Footnote to create an animated chart on his site, Carpe Diem. Mark’s animated chart is taken from the same database at SlaveVoyages.org that we discussed in our post. The animation traces the trans-Atlantic slave trade over time, and reflects the fact that statistically, the American colonies and, later, the U.S. played only a minor role.

African slaves brought to the New World video at:  https://youtu.be/ItyAH4GPBbs

It also should be kept in mind that the East African slave trade to the Arab countries was larger in numbers than the trans-Atlantic trade. Slavery was a great evil that existed from time immemorial on every continent except Antarctica, and was not seriously opposed, in principle, until the mid to late 18th century.

The Republican Party was formed mostly to oppose slavery in the U.S., and ultimately succeeded in abolishing it. That is a heroic story. But the Left’s attempt to discredit all of American history with a unique taint of slavery is a gross distortion of reality.

SLAVERY? WE WERE A FOOTNOTE 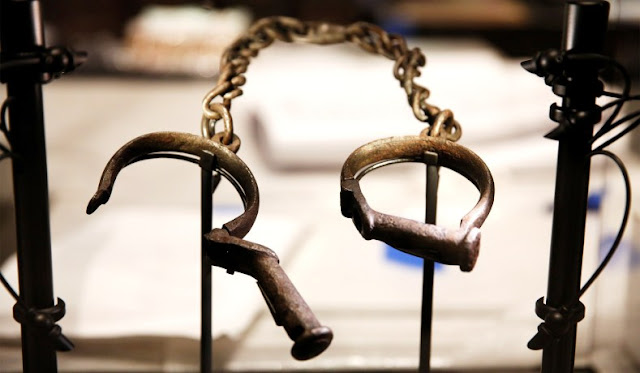 Liberals are trying to rewrite American history, teaching our children that the only thing that ever happened here–until they came along a year or two ago!–was slavery. The New York Times’s 1619 Project, which is being enthusiastically adopted by the nation’s public schools, is the culmination of years of left-wing propaganda. The liberals’ task is made easier by the fact that world history is mostly terra incognita to America’s young people. Thus, there is little fear of anyone putting American slavery into a global, historical context.

But let’s do it anyway.

Slavery has existed since time immemorial on every continent except Antarctica, as Thomas Sowell wrote years ago. An estimated one-third to one-half of the inhabitants of the Roman empire, for example, were slaves. For more than 1,000 years, slaves (few of them Africans) were one of the basic commodities of trade across most of the world. But let’s focus specifically on African slavery.

Sub-Saharan Africa had a slave economy long before Europeans came along. But the external African slave trade of the early modern era had two basic components: Eastern and Western. The Eastern slave trade went to Arab countries. For a long time, the Arabs bought or captured European slaves, but when that supply dried up, they turned to Africa. Numbers are hard to come by–weirdly, the Arab slave trade hasn’t been as widely studied as the Western trade–but this source estimates that 17 million East Africans were sold into slavery in Islamic countries. If that number is correct, the Eastern slave trade was considerably larger than the Western.

To my knowledge, the best data source on the Western, or trans-Atlantic, slave trade is the Trans-Atlantic and Intra-American slave trade database, which is a product of the Emory University Center for Digital Scholarship, the University of California at Irvine, the University of California at Santa Cruz, the Hutchins Center at Harvard University and the National Endowment for the Humanities. This chart, from that source, shows how many slaves disembarked at various locations between 1501 and 1875.

The database shows a total of 10,702,654 slaves transported in the Atlantic trade. Of those, only 388,747 arrived in mainland North America, what became the United States–3.6% of the total in the trans-Atlantic trade, and well under 2% of the total slaves exported from Africa. Trans-Atlantic slaves went primarily to Brazil and the Caribbean. Portuguese Brazil imported more than 12 times as many slaves as North America. Brazil abolished slavery in 1888.

Meanwhile, importation of slaves into what became the U.S. declined dramatically beginning in 1776 and terminated in 1807, pursuant to the Constitution, although a few were imported illegally thereafter.

This graphic, from the same source, shows the magnitude of the Atlantic slave trade to various regions. You can easily see what a minor factor the North American colonies and, in the final stage, the United States were: 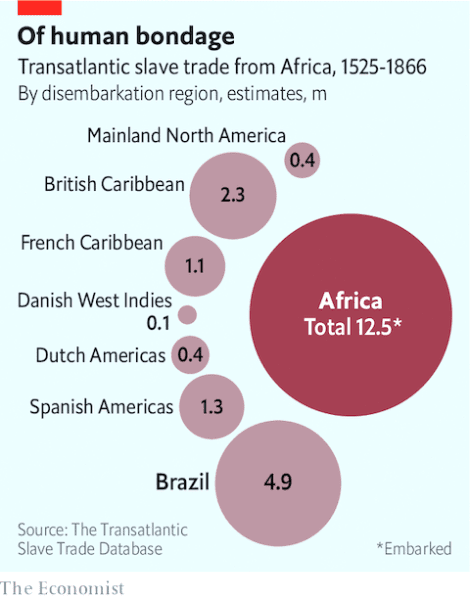 Does this mean that slavery, here or elsewhere, was A-OK? Of course not.

Through all of human history, slavery has been a horror. But virtually no one seriously opposed slavery in principle (as opposed to hoping that his own group would not be enslaved) until the late 18th and early 19th centuries, when Christians in England and America, with a powerful assist from Jews, argued for the first time that slavery was wrong per se.

Thereafter, the British Navy played the lead role in suppressing the slave trade. I am going from memory, but I believe the last time a British war ship chased an Arab slave trader off the coast of East Africa was in 1902. And the Arab slave trade, and slavery in Arab countries, continued long after that–in fact, to this day.

Here in the U.S., the Republican Party was founded principally to combat slavery, which the Democratic Party fought bitterly to preserve. After the loss of 600,000 lives–far more than the number of African slaves who were brought to the colonies, although of course others were born here–abolition was achieved.

When I was growing up, the abolition of slavery was justly celebrated in America’s public schools. Teachers in those days had a better grasp of history. Today, American children are being force-fed an ahistorical narrative in which America is somehow responsible for the entire phenomenon of African slavery, which extends back into pre-history and in which we have played a minor role.

By such lies do leftists seek to undermine our country. We shouldn’t let them get away with it. When it comes to slavery, America, along with Great Britain, is on the side of the angels. As is manifested by the fact that most Africans have come to the U.S. not as slaves, but rather voluntarily as immigrants, seeking freedom and a more prosperous life.

https://www.powerlineblog.com/archives/2019/11/slavery-we-were-a-footnote.php
Posted by Frances Rice at 11:42 AM