The Shame of America

Ida B. Wells, an early anti-lynching advocate who virtually worked alone, exposed the unspeakable brutality of a violent mob with their “unwritten law” that justified putting human beings to death by lynching. Wells documented the history of lynching in the goldfields of the far West. The thief or the man who jumped a claim and other outlaws tried, and if found guilty, were hanged under a tree where the court convened. But what happened in the South by the end of the Civil War and during Reconstruction, was an entirely different situation. She demanded that lynching end, that it was a federal crime and required a federal remedy.

Southern Democrats used frequent lynchings to intimidate, suppress, and nullify blacks’ right to vote. This “unwritten law” was used to accuse blacks of rape against white women or bumping into a white person – anything Southern Democrats wanted to charge a black for to return white supremacy to the South.  By the time of the collapse of Reconstruction, Southern Democrats had successfully established Jim Crow Laws throughout the South and repressed black leadership. Wells continued her prominent anti-lynching campaign for forty years urging Presidents William McKinley to President Woodrow Wilson to outlaw the practice of lynching. She became the most prominent opponent of lynching in the United States and garnered an essential ally in the National Association for the Advancement of Colored People (NAACP). 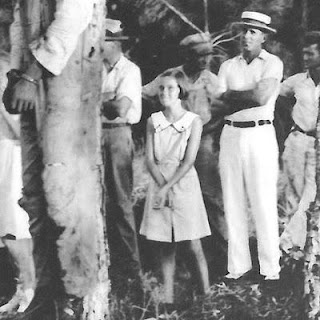 Unsuccessful efforts to stop lynchings in America would continue during FDR’s administration and not until President Truman, did the Democrats pass an anti-lynching bill in 1946. However, lynchings would continue through 1967 along with Jim Crow laws and brutality for blacks and other whites that supported them.

Ida B. Wells – The Library of Congress
https://www.loc.gov/rr/news/topics/ida.html

Lynch Laws in All Its Phases; February 13, 1893
https://voicesofdemocracy.umd.edu/wells-lynch-law-speech-text/

About the author: Sandra K. Yocum is the Founder/President of the Yocum African-American History Association (YAAHA) that is dedicated to the restoration and preservation of the events which shaped the lives and contributions of African-Americans. Information can be found at: www.itsmorningagain.com