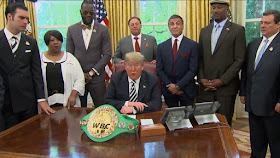 WASHINGTON (Reuters) - U.S. President Donald Trump on Thursday issued a posthumous pardon to boxer Jack Johnson, the first African-American heavyweight champion, who was jailed a century ago due to his relationship with a white woman.

“I believe Jack Johnson is a worthy person to receive a pardon, to correct a wrong in our history,” Trump said. 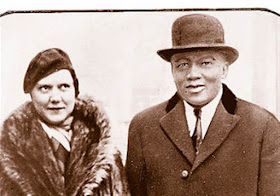 In a case that came to symbolize racial injustice, Johnson was arrested in 1912 with Lucille Cameron, who later became his wife, for violating the Mann Act. The law was passed two years earlier and made it a crime to take a woman across state lines for immoral purposes. 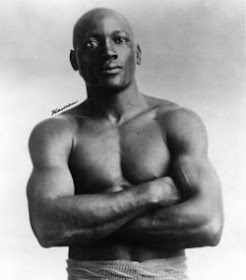 In signing the pardon, the president cited “tremendous racial tension” during the time Johnson was champion. “He really represented something that was both very beautiful and very terrible at the same time,” Trump said.

Actor Sylvester Stallone, famous as the star of the “Rocky” boxing-movie franchise, and former world heavyweight boxing champion Lennox Lewis flanked Trump for the pardon in the Oval Office. In April, Trump tweeted that he was considering the pardon after talking to Stallone.

Earlier on Thursday, Stallone posted a photo of himself at the White House on Instagram with the caption “Waiting for the moment to go into the oval office for the pardon...”

In the Oval Office, Trump said of Stallone: “I love his movies.”

“This has been a long time coming,” Stallone said, adding that Johnson served as the inspiration for the character of Apollo Creed in the Rocky movies.