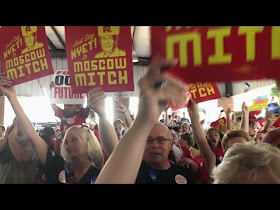 Twitter temporarily suspended the campaign account of Senate Majority Leader Mitch McConnell for posting a video of the invitations to violence against him by Louisville Black Lives Matter leader Chanelle Helm.

To be specific, the video captured Helm’s comments at what is euphemistically termed a “protest” outside Senator McConnell’s Louisville home on Monday night. Helm asserted that instead of falling and injuring his shoulder over the weekend, McConnell “should have broken his little raggedy, wrinkled-[expletive] neck.” After a man made a reference to a hypothetical McConnell voodoo doll, Helm replied, “Just stab the m—– f—– in the heart.” That comment went viral on Twitter.

The video is at this link:  https://youtu.be/Kf0hQrV2Y_Y 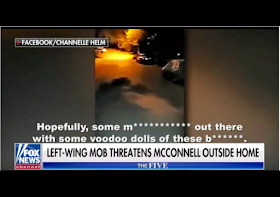 The Louisville Courier Journal reported on Monday’s night “protest” here. It reported on the Twitter suspension of Senator McConnell’s campaign account here. My summary in the first paragraph above is drawn from the Courier Journal. Memeorandum has compiled related stories here.

“Twitter will allow the words of ‘Massacre Mitch’ to trend nationally on their platform but locks our account for posting actual threats against us. We appealed and Twitter stood by their decision, saying our account will remain locked until we delete the video.”