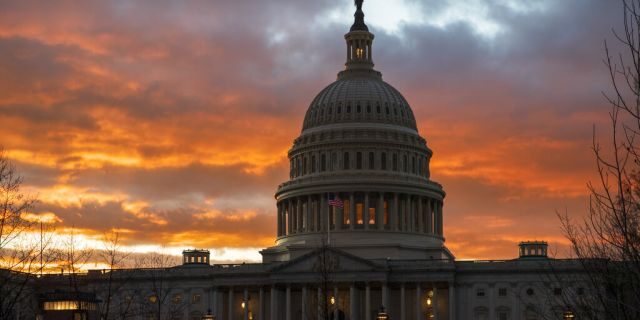 The U.S. Capitol is seen at sunset in Washington, Jan. 24, 2019. Senate Majority Leader Mitch McConnell, R-Ky., appears to have the votes to end the trial against President Trump. (Associated Press)

"If this shallow, hurried and wholly partisan impeachment were to succeed, it would rip the country apart, pouring gasoline on the fire of cultural divisions that already exist," Alexander said. "It would create the weapon of perpetual impeachment to be used against future presidents whenever the House of Representatives is of a different political party."

He added: “The framers believed that there should never, ever be a partisan impeachment. That is why the Constitution requires a 2/3 vote of the Senate for conviction. Yet not one House Republican voted for these articles."

On Tuesday, Trump is set to address Congress for the annual State of the Union address, which is increasingly likely to resemble a victory lap following months of quixotic Democratic calls for the president's removal from office.

Should the witness vote fail as expected on Friday evening, the Senate would likely then vote on either additional motions for debate, or even the articles of impeachment themselves. An extraordinarily unlikely two-thirds supermajority vote is needed to convict and remove Trump; otherwise he will be acquitted.