Deal: Conservatives Will Stop Talking About Hillary When She Stops Lying and Whining About the Election 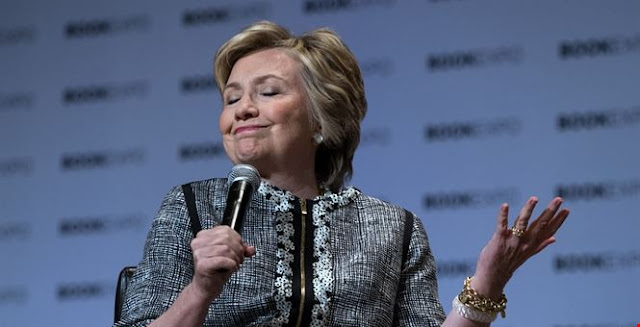 An odd thing happened yesterday after I appeared on Fox News to discuss Hillary Clinton's latest blame storm over her election loss.

In case you missed it, she gave an interview in which she peddled unproven Russia conspiracies (she's always had a thing for conspiracies), and trashed her own party for leaving the cupboard bare.

Add these gripes to her previous whining about "fake news" (some of the most-shared examples of which benefitted her) and James Comey (who actually let her off the hook for her criminal activity), and a picture emerges of a bitter sore loser who remains in denial.

I was invited on the air to discuss her new remarks, and I told some obvious truths, with which even many Democrats are beginning to agree:

Fox News tweeted out one of my quotes, which set off a torrent of angry responses from liberals who "hate follow" Fox, most of which offered different spins on the same message: The election is over, stop obsessing over Hillary Clinton.
Some also claimed that Hillary has taken responsibility for her loss, so asserting that she's blaming others is dishonest.
My retorts were pretty straightforward.
On the latter point, mouthing the words "I take full responsibility" is an utterly empty exercise in false contrition when you proceed to repeatedly and incessantly point fingers at others.
When she says words about taking responsibility, she's lying, which seems to be her default setting.
On the former criticism, I'd like nothing more than to stop talking about this arrogant, corrupt, calculating, two-time presidential election loser.

If and when she ever goes away, I'll happily stop thinking and talking about her.
But she's making an ongoing choice to loudly insert herself into our politics, attempting to be a face of The Resistance.
So when she shows up and pops off, whether on Twitter, or in interviews, or public speeches, it's newsworthy.
If she raises the specter of impeachment at her alma mater, people are going to talk about it.
When she continues to shamelessly lie about her email scandal, it's newsworthy.
She firmly believes that the Russians colluded with the Trump campaign, citing zero evidence, yet she still claims that her national security-endangering email scheme was a "nothing burger:"


No, no, no. She deliberately handled reams of classified information -- including extremely sensitive information -- with extreme recklessness, a synonym for gross negligence. That's a crime.
She absolutely knew she was breaking the rules, and maintained her reckless, unaccountable course anyway.
And she lied about it. Oh, did she lie about it. She's still lying about it.
Perhaps when you're so accustomed to lying to other people, it's easy to lie to yourself, too.
After all, telling yourself that it was the Russians, and Comey, and the DNC, ad infinitum is probably much less painful that confronting the truth.
And the truth is that she was an unlikable, untrustworthy, charmless, out-of-touch, unethical candidate whose smug, expensive campaign made catastrophic mistakes -- managing to lose to a man whose disapproval rating was somehow higher than her own.
And she pulled off that historic feat while vastly outspending her opponent.
Slow clap.
Speaking of money, when Mrs. Clinton announces that she's going to raise millions of Big Money dollars (her bread and butter) through her PAC and pour them into races across the country, she forfeits the right to be left alone by the commentariat.