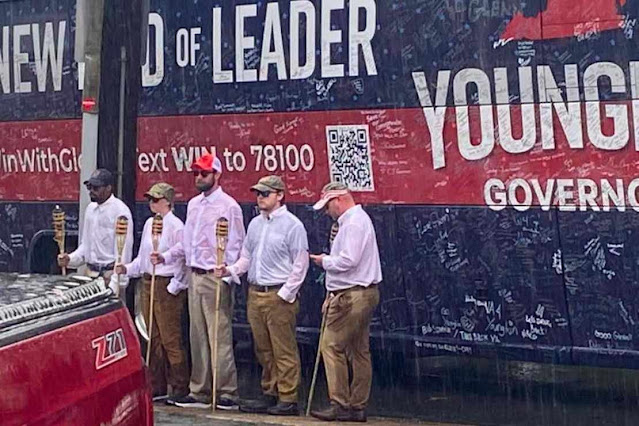 Once again, the Democratic Left has confirmed its true evil, and in typical fashion. Locked in a close race for their political lives, they do what they always do: Play the race card.

On cue, four men and one woman stood beside Youngkin’s campaign tour bus Friday in Charlottesville. Their attire: khakis, white shirts, and baseball caps. And each held a tiki torch. This was exactly how white nationalists appeared as they marched through Charlottesville on August 12, 2017. The next day’s Unite the Right rally devolved into a deadly race riot.

“We’re all in with Glenn,” the young bigots said, as NBC affiliate WVIR’s Elizabeth Holmes reported via Twitter.

Team McAuliffe leapt on this news. 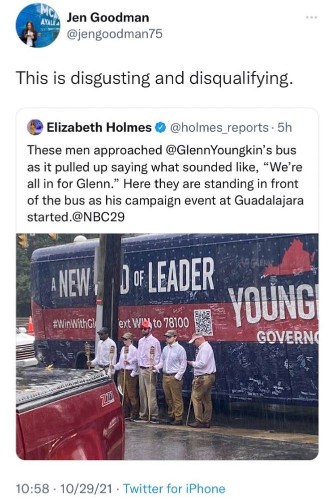 Self-described “Terry for Virginia spokesperson” Christina Freundlich heaped scorn, too. “The Unite the Right rally was one of the darkest days in the Commonwealth’s history. this [sic] is who Glenn Youngkin’s supporters are,” she announced Friday via Twitter.

At last! This proved that Glenn Youngkin was not just the successful co-CEO of the Carlyle Group financial house, making his first run for office — and doing remarkably well. No, Youngkin finally was exposed as a white supremist, and a menacingly smooth, suave, and polished one at that — the most dangerous kind.

Except that this was a gigantic lie.

The five tiki-wielders perpetrated a classic false-flag operation. They pretended to be Youngkin supporters but were Youngkin opponents.

The “pro-Youngkin white nationalists” were deployed by the Lincoln Project, a lavishly funded group of Left-wing Trump haters. “Today’s demonstration was our way of reminding Virginians what happened in Charlottesville four years ago, the Republican Party’s embrace of those values, and Glenn Youngkin’s failure to condemn it,” the Lincoln Project stated late Friday.

The Lincoln Project tumbled into severe disrepute in January when 21 young men accused one of its founders, John Weaver, of sexual harassment. In some cases, he allegedly promised to exchange job offers for intimate favors. In a world-class case of bait and switch, the former seldom followed the latter. Even worse, at least one man was a boy, under age 18. Friday’s revolting, race-hustling character-assassination attempt was this discredited group’s failed bid to regain respect.

One Tikigate participant is Camden Layton, finance director with the Young Democrats of Virginia. His Twitter profile, suddenly turned private as this scandal erupted, called him “Camden ‘vote for Dems on Nov 2’ Layton.” 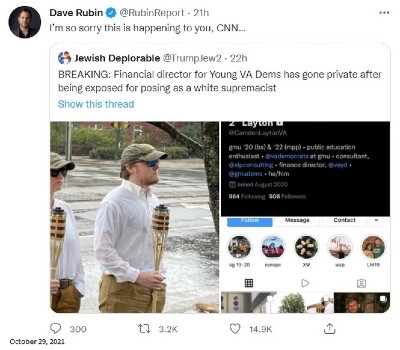 As Outkick’s Alejandro Avila reported, the sole female tiki bearer is named Colleen Wachenfeld. On Twitter she tags herself as “@VADemocrats” and links herself to President Joe Biden and Vice President Kamala Harris. Wachenfeld also boasts that she helped turn Arizona Democratic in 2020.

Human Events’ Jack Posobiec crisply encapsulated this ugliness. “To be clear: Virginia Democrat operatives dressed up as Neo-Nazis holding tiki-torches today to smear their opponent and attempted to pass it off as actually happening.”

Glenn Greenwald observed: “The McAuliffe campaign ‘condemned the stunt’ after they spent all day pushing it as proof of Youngkin’s racist ties.”

Such vile ethnic appeals are the Left’s kneejerk reflex, especially when cornered.

Recall how an NAACP TV ad tried to connect George W. Bush with the lynching of a black man named James Byrd, whom bigots in Jasper, Texas, chained to a truck and dragged to death in 1998. As the Lone Star State’s governor, Bush presided over the executions of two of Byrd’s three murderers. He also addressed the NAACP while running for president in 2000. Nonetheless, the Left-wing group’s campaign spot all but placed Bush behind the wheel of that killer pickup.

In 2012, then-Vice President Joe Biden warned black voters, in Virginia no less, that Republican Mitt Romney was “going to put y’all back in chains.”

The mild-mannered, disciplined Youngkin terrifies Democrats and their allies in the regime media. Richmond Times-Dispatch columnist Jeff Schapiro on Wednesday snarled that “Youngkin’s weapon” is “an appeal to white fears.”

Fourteen percent of black likely voters supported Youngkin in Thursday’s Fox survey. This is not a barn-burning result, but above average for GOP candidates.

Far more worrisome for the Left, 24 percent of blacks backed Youngkin in an October 22-23 Emerson College survey of 875 likely voters (error margin: +/- 3.2 percent). Such black backing for a Republican contender is almost unprecedented. McAuliffe and Youngkin split Hispanics in the Emerson poll, 48 percent to 47 percent.

The Hampton Roads Black Caucus endorsed Youngkin, the first GOP candidate so blessed since its 2012 launch.

This organization recommends Youngkin as the best candidate to secure its objectives: black entrepreneurship, educational advancement, and economic development.

“I am incredibly humbled and honored to have the support of the Hampton Roads Black Caucus and look forward to working closely with them and all Black Virginians to implement my Day One Game Plan to make Virginia the best place to live, work, and raise a family,” Youngkin said. “Terry McAuliffe has hurt Black Virginians by turning his back on our schools and children, making our communities less safe, and causing the cost of living to explode.”

Youngkin won this black support the old-fashioned way: He earned it.

“Youngkin has prioritized outreach to the Black community,” his campaign website explains. Specifically, he:

In contrast, Governor McAuliffe vetoed school choice — thrice. He is enslaved by the teachers’ unions and will do as instructed. If, consequently, black kids learn nothing, well that’s their problem.

Letting a poised, popular, self-financed Republican beat the bagman for the Clinton crime family just cannot happen. So, out came the Democratic race card, like clockwork.