Whitewash: The racist history the Democratic Party wants you to forget.

From the WSJ Opinion Archives 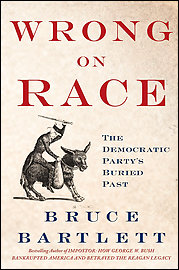 
Below is a brief summary in the form of quotations by prominent Democrats throughout history making extraordinarily racist statements that were ugly even in their time. I was careful to ensure that the people I quoted were genuine leaders of the Democratic Party and not isolated kooks. The primary sources are documented in my book.

Blacks "are inferior to the whites in the endowments of both of body and mind."


--Thomas Jefferson, 1787
Co-founder of the Democratic Party (along with Andrew Jackson)
President, 1801-09


"I hold that the present state of civilization, where two races of different origin, and distinguished by color, and other physical differences, as well as intellectual, are brought together, the relation now existing in the slaveholding states between the two, is, instead of an evil, a good--a positive good."


If blacks were given the right to vote, that would "place every splay-footed, bandy-shanked, hump-backed, thick-lipped, flat-nosed, woolly-headed, ebon-colored Negro in the country upon an equality with the poor white man."


"Resolved, That the Democratic Party will resist all attempts at renewing, in Congress or out of it, the agitation of the slavery question, under whatever shape or color the attempt may be made."


Blacks are "a subordinate and inferior class of beings who had been subjugated by the dominant race."


"Resolved, That claiming fellowship with, and desiring the co-operation of all who regard the preservation of the Union under the Constitution as the paramount issue--and repudiating all sectional parties and platforms concerning domestic slavery, which seek to embroil the States and incite to treason and armed resistance to law in the Territories; and whose avowed purposes, if consummated, must end in civil war and disunion, the American Democracy recognize and adopt the principles contained in the organic laws establishing the Territories of Kansas and Nebraska as embodying the only sound and safe solution of the 'slavery question' upon which the great national idea of the people of this whole country can repose in its determined conservatism of the Union--NON-INTERFERENCE BY CONGRESS WITH SLAVERY IN STATE AND TERRITORY, OR IN THE DISTRICT OF COLUMBIA" (emphasis in original).


"I hold that a Negro is not and never ought to be a citizen of the United States. I hold that this government was made on the white basis; made by the white men, for the benefit of white men and their posterity forever, and should be administered by white men and none others."


"Resolved, That the enactments of the State Legislatures to defeat the faithful execution of the Fugitive Slave Law, are hostile in character, subversive of the Constitution, and revolutionary in their effect."


"My fellow citizens, I have said that the contest before us was one for the restoration of our government; it is also one for the restoration of our race. It is to prevent the people of our race from being exiled from their homes--exiled from the government which they formed and created for themselves and for their children, and to prevent them from being driven out of the country or trodden under foot by an inferior and barbarous race."


"Instead of restoring the Union, it [the Republican Party] has, so far as in its power, dissolved it, and subjected ten states, in time of profound peace, to military despotism and Negro supremacy."


"We, the delegates of the Democratic party of the United States . . . demand such modification of the treaty with the Chinese Empire, or such legislation within constitutional limitations, as shall prevent further importation or immigration of the Mongolian race."


"No more Chinese immigration, except for travel, education, and foreign commerce, and that even carefully guarded."


"American civilization demands that against the immigration or importation of Mongolians to these shores our gates be closed."


"We favor the continuance and strict enforcement of the Chinese exclusion law, and its application to the same classes of all Asiatic races."


"Republicanism means Negro equality, while the Democratic Party means that the white man is supreme. That is why we Southerners are all Democrats."


"We are opposed to the admission of Asiatic immigrants who can not be amalgamated with our population, or whose presence among us would raise a race issue and involve us in diplomatic controversies with Oriental powers."


"I am opposed to the practice of having colored policemen in the District [of Columbia]. It is a source of danger by constantly engendering racial friction, and is offensive to thousands of Southern white people who make their homes here."


"The South is serious with regard to its attitude to the Negro in politics. The South understands this subject, and its policy is unalterable and uncompromising. We desire no concessions. We seek no sops. We grasp no shadows on this subject. We take no risks. We abhor a Northern policy of catering to the Negro in politics just as we abhor a Northern policy of social equality."


--Josephus Daniels, editor, Raleigh News & Observer, 1912
Appointed Secretary of the Navy by Woodrow Wilson in 1913
Appointed Ambassador to Mexico by Franklin D. Roosevelt in 1933
USS Josephus Daniels named for him by the Johnson Administration in 1965


"The Negro as a race, in all the ages of the world, has never shown sustained power of self-development. He is not endowed with the creative faculty. . . . He has never created for himself any civilization. . . . He has never had any civilization except that which has been inculcated by a superior race. And it is a lamentable fact that his civilization lasts only so long as he is in the hands of the white man who inculcates it. When left to himself he has universally gone back to the barbarism of the jungle."


"Slavery among the whites was an improvement over independence in Africa. The very progress that the blacks have made, when--and only when--brought into contact with the whites, ought to be a sufficient argument in support of white supremacy--it ought to be sufficient to convince even the blacks themselves."


"Anyone who has traveled to the Far East knows that the mingling of Asiatic blood with European or American blood produces, in nine cases out of ten, the most unfortunate results. . . . The argument works both ways. I know a great many cultivated, highly educated and delightful Japanese. They have all told me that they would feel the same repugnance and objection to have thousands of Americans settle in Japan and intermarry with the Japanese as I would feel in having large numbers of Japanese coming over here and intermarry with the American population. In this question, then, of Japanese exclusion from the United States it is necessary only to advance the true reason--the undesirability of mixing the blood of the two peoples. . . . The Japanese people and the American people are both opposed to intermarriage of the two races--there can be no quarrel there."


--Hugo Black, accepting a life membership in the Ku Klux Klan upon his election to the U.S. Senate as a Democrat from Alabama, 1926
Appointed to the Supreme Court by Franklin D. Roosevelt in 1937


"Mr. President, the crime of lynching . . . is not of sufficient importance to justify this legislation."


--Sen. Claude Pepper (D., Fla.), 1938
Spoken while engaged in a six-hour speech against the antilynching bill


"I am a former Kleagle [recruiter] of the Ku Klux Klan in Raleigh County. . . . The Klan is needed today as never before and I am anxious to see its rebirth here in West Virginia. It is necessary that the order be promoted immediately and in every state in the union."


"There is no warrant for the curious notion that Christianity favors the involuntary commingling of the races in social institutions. Although He knew both Jews and Samaritans and the relations existing between them, Christ did not advocate that courts or legislative bodies should compel them to mix socially against their will."


"The decline and fall of the Roman empire came after years of intermarriage with other races. Spain was toppled as a world power as a result of the amalgamation of the races. . . . Certainly history shows that nations composed of a mongrel race lose their strength and become weak, lazy and indifferent."


"These Negroes, they're getting pretty uppity these days and that's a problem for us since they've got something now they never had before, the political pull to back up their uppityness. Now we've got to do something about this, we've got to give them a little something, just enough to quiet them down, not enough to make a difference. For if we don't move at all, then their allies will line up against us and there'll be no way of stopping them, we'll lose the filibuster and there'll be no way of putting a brake on all sorts of wild legislation. It'll be Reconstruction all over again."


"I have never seen very many white people who felt they were being imposed upon or being subjected to any second-class citizenship if they were directed to a waiting room or to any other public facility to wait or to eat with other white people. Only the Negroes, of all the races which are in this land, publicly proclaim they are being mistreated, imposed upon, and declared second-class citizens because they must go to public facilities with members of their own race."


"I did not lie awake at night worrying about the problems of Negroes."


"I'm not going to use the federal government's authority deliberately to circumvent the natural inclination of people to live in ethnically homogeneous neighborhoods. . . . I have nothing against a community that's made up of people who are Polish or Czechoslovakian or French-Canadian or blacks who are trying to maintain the ethnic purity of their neighborhoods."


"The Confederate Memorial has had a special place in my life for many years. . . . There were many, many times that I found myself drawn to this deeply inspiring memorial, to contemplate the sacrifices of others, several of whom were my ancestors, whose enormous suffering and collective gallantry are to this day still misunderstood by most Americans."


"Everybody likes to go to Geneva. I used to do it for the Law of the Sea conferences and you'd find these potentates from down in Africa, you know, rather than eating each other, they'd just come up and get a good square meal in Geneva."


"I do not think it is an exaggeration at all to say to my friend from West Virginia [Sen. Robert C. Byrd, a former Ku Klux Klan recruiter] that he would have been a great senator at any moment. . . . He would have been right during the great conflict of civil war in this nation."


"It has of late become the custom of the men of the South to speak with entire candor of the settled and deliberate policy of suppressing the negro vote. They have been forced to choose between a policy of manifest injustice toward the blacks and the horrors of negro rule. They chose to disfranchise the negroes. That was manifestly the lesser of two evils. . . . The Republican Party committed a great public crime when it gave the right of suffrage to the blacks. . . . So long as the Fifteenth Amendment stands, the menace of the rule of the blacks will impend, and the safeguards against it must be maintained."