By Kimberley A. Strassel 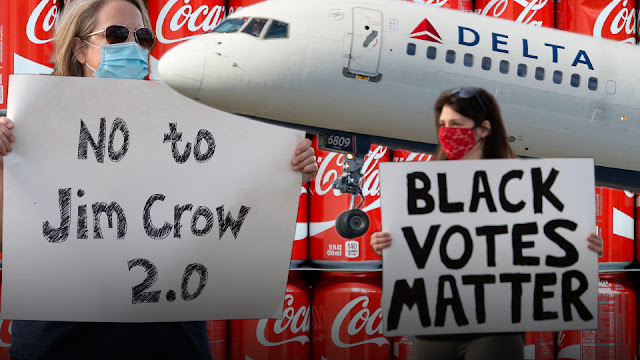 ID requirements are no more racist at the ballot box than they are on a Delta flight.

Potomac Watch: CEOs denounce Georgia’s election law, but have they read it?

Corporate chieftains last year criticized Donald Trump for denying his re-election defeat. So it’s quite a spectacle to see them actively spreading the left’s own big lie about elections.

According to Delta CEO Ed Bastian, there is only one reason Georgia passed a voting reform: to suppress the votes of black Americans and other minorities. Georgia’s Republican Legislature used the “excuse” of voter fraud to “make it harder for many underrepresented voters” to “exercise their constitutional right to elect their representatives,” Mr. Bastian wrote this week in a memo to employees.

Mr. Bastian has plenty of company in the C-suites. Some 72 black executives, including the CEO of Merck and a former CEO of American Express, signed an open letter calling on corporate colleagues to fight “undemocratic” and “un-American” GOP efforts across the states to “assault” the “fundamental tenets of our democracy.” Coca-Cola, Microsoft and Apple chimed in, and dozens more are readying outraged press releases.

Nancy Pelosi couldn’t be more thrilled. Democrats and the activist left have long honed their techniques for intimidating corporations. They successfully pressured companies into withdrawing contributions from free-market groups, into embracing a climate-change agenda, into refraining from political contributions, into adopting new “social” investment criteria.

Enlisting corporate America to help peddle a patently false narrative is their biggest success by far. The left spent last year using litigation and political pressure to alter and weaken election standards across the country. Democratic lawmakers and the Biden administration moved swiftly to cement this effort with a federal takeover of state election law, the bill known as H.R.1.

Its enactment is still no sure thing, so the left is trying to block election-reform efforts at the state level. Central to this campaign is the dishonest claim that Republicans are launching these efforts only because they lost the White House and because they want to cripple the minority vote. Activists have spent weeks threatening companies that didn’t join them with boycotts, protests and the label of “Jim Crow racists,” and companies have complied.

Thus the sight of the nation’s top business leaders monotonously reciting a fact-free narrative. As they know, state legislatures are moving to reaffirm longstanding rules and restore confidence in electoral systems that were arbitrarily remade during Covid. ID requirements are no more racist at the ballot box than on a Delta flight. Some 36 states have them, and they’ve been upheld by the Supreme Court. It isn’t Jim Crow to codify the use of the ad hoc drop boxes that sprung up last year. It isn’t voter suppression to reaffirm that activists aren’t allowed to approach voters in line, especially to solicit votes with gifts (contrary to urban legend, the Georgia law allows poll workers to provide water). The Georgia law expands voting, adding early voting on more weekends and providing additional equipment and poll workers in larger precincts.

Mr. Bastian’s moralizing memo fails to cite a single one of the supposedly “egregious measures” in the bill that will suppress the vote, although he does stress he hears his employees’ “pain.”

The letter from the 72 executives misstates the Georgia rules, suggesting the only way to satisfy the ID requirement is with a driver’s license, even though “200,000 Georgians lack a license.” In fact, voters can also use a free, state-issued nondriver ID, and those who lack one can fulfill the requirement with a Social Security number or even a copy of a “current utility bill, bank statement, government check, or paycheck.” The letter suggests the Georgia “playbook”—enacting rules less onerous than those in many blue states, as Karl Rove has noted in these pages—is of a piece with “police dogs, poll taxes, literacy taxes.” One can only hope Merck is more rigorous when conducting pharmaceutical trials.

Corporate CEOs may think this virtue signaling will spare them the left’s boycotts or Democrats’ punitive legislative measures. That’s a sucker’s bet given this week’s Democratic plan to siphon $2.3 trillion from corporations to fund new spending. Meanwhile, longtime Republican defenders of corporate activity are rapidly losing interest in aiding CEOs who promote partisan conspiracy theories. Witness Sen. Marco Rubio’s fuming tweet on Thursday calling Delta a “woke corporate hypocrite,” noting that the company is “business partners with the Chinese Communist Party,” raking in “billions of dollars in a country that doesn’t even have elections.”

Smart executives have long understood the value of political neutrality. Corporate America is now throwing its lot in with one of the most partisan, brass-knuckle, dishonest campaigns in recent political history. It will be a long time mending fences with Republicans—if that’s even possible.