If Democrats Pack the Court 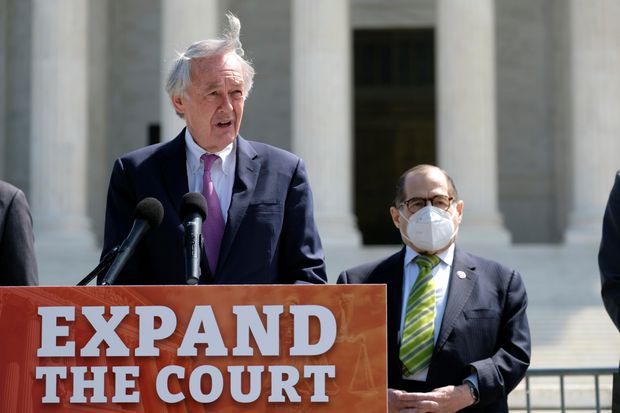 After they add Justices, the GOP could strip their jurisdiction.

The media mostly treated President Biden’s announcement of his 36-member commission on the Supreme Court last week as a deft deflection of court packing. Well, not so fast. The Chairman of the House Judiciary Committee and other Democrats introduced a bill this week to expand the Supreme Court to 13 Justices from nine.

Message: The Democratic left is serious about this, and the Biden commission better not dismiss it. Oh, and pay attention, Justices. Congress will remake the Court if you issue rulings that offend progressives.

Republicans are rightly calling this out for the political intimidation it is. But here’s another message for the GOP and the commission to consider: If Democrats do turn the Court into another legislature by packing it, the GOP has the power to limit or strip its jurisdiction.

If that sounds radical, consider what Democrats are proposing. Merely because GOP appointees now hold a 6-3 majority on the High Court, progressives want to blow it up on a partisan Congressional vote. Adding Justices in this way would undermine the Court’s legitimacy with the American public, with perhaps lasting harm, as Justice Stephen Breyer warned in a timely speech last week.

Many Republicans respond by saying they’ll return the disfavor when they next have power and add more Justices. But this concedes the progressive view that the Court is merely another policy-making body. It would turn the Court into a de facto House of Lords, albeit with power, which would put an end to its traditional judicial role of applying the law to cases and controversies.

There’s a better response: Limit the Supreme Court’s ability to function as a super legislature. Congress can do this by limiting the appellate jurisdiction of the Court. This would limit a packed Court’s power by returning it to the original role of the judiciary under the Constitution’s separation of powers.

The Constitution explicitly gives Congress the power to determine the appellate jurisdiction of the federal courts in Article III, Section 2. The Supreme Court recognized this Congressional authority in the 1869 case, Ex Parte McCardle . Justice Antonin Scalia invoked McCardle’s view of jurisdiction in his 2006 dissent in Hamdan v. Rumsfeld and was joined by Justices Clarence Thomas and Samuel Alito.

Much would depend on how Congress chose to define jurisdiction to limit judicial policy-making on an expanded Court. One idea would strip jurisdiction over cases seeking to find rights not expressly mentioned in the Constitution. Progressives regularly ask the Justices to recognize new rights that are protected by the doctrine of “substantive due process,” as the right to abortion was. Congress could bar the Justices from hearing cases asking them to use that analysis to invent new rights such as a right to suicide or to a guaranteed income.

Another possibility would be cases that seek to restrict political free speech by regulating campaign contributions. A Court packed by Democrats would surely seek to overturn Citizens United v. FEC (2010), and a Republican Congress could deny the Court’s ability to hear such cases.

Stripping the discretion of courts over immigration decisions would return final authority to the federal agencies created by Congress. This would clear away the judicial interference that has bedeviled immigration policy and contributed to the mess on the Mexico-U.S. border.

Congress could also remove the Court’s ability to hear cases under the 1971 Bivens precedent that recognized implied cause of action in the absence of Congressional authorization. This gave the federal courts more power over federal and state policies, and Justice Thomas has said Bivens was wrongly decided.

Cases challenging the detention of enemy combatants could also get the heave-ho, as per Justice Scalia’s opinion in Hamdan. So could cases seeking national injunctions, which proliferated during the Trump Presidency. And don’t forget cases that challenge such fundamentally political decisions as Congressional redistricting or the Census.

We can think of others, but you get the idea. If Democrats want to turn the Court into a super legislature, then they would run the risk of having a future Congress circumscribe the Court’s writ to narrower and traditional judicial purposes.

It’s true that a packed Court could react to this by using its power to invalidate these jurisdictional limits. But if the Court did so, it would invite other retaliation by Congress using its power of the purse. Perhaps Congress would cease to fund law clerks and Court staff.

We want to be clear that we favor none of this, at least not now. But this scenario is a warning to the Biden court commission to be careful what you recommend. The political intrusion into the judiciary isn’t likely to end with the addition of two or four more Justices. Democrats are playing a dangerous game by toying with the judiciary, and the courts and the country would be the losers.