On Race, It's Heads the Left Wins, Tails America Loses 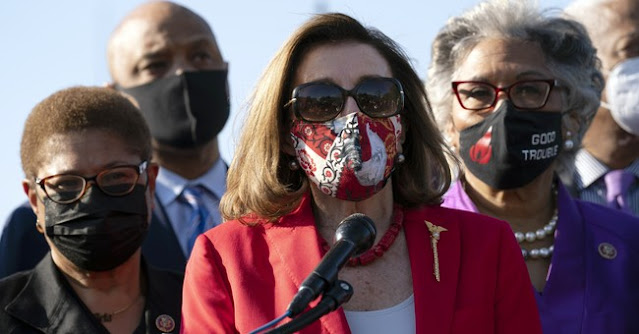 Remember that "national conversation about race" the political Left has been demanding for decades in this country? Well, apparently, we are having it now. This is what that conversation looks like.

Democrats yell at you about how racist you, your history, and your country are, and you must agree with them. If you explain you aren't racist, you are told that this merely proves how racist you are. If you point out that there is nothing you have ever done or said in your entire life that is in any way racist, you are told that you haven't actively been "anti-racist," so, therefore, you are racist.

If you point out that you married a person of a different race and brought into this world mixed-race children and that it's pretty obscene that you would be called a "white supremacist" since, by the very nature of your progeny, you have helped to advance the notion that race is meaningless and what matters is the content of one's character, you are labeled a white oppressor who has used his own family to expand his racist colonialism instinct.

You are then told to shut your mouth, listen to the rest of your company's critical race theory-infused diversity training and sign a document agreeing with everything you've been told or else lose your job.

This is the conversation on race. Stop talking and admit you and your country are racist.

It's not really a conversation as much as a lecture under extreme duress.

So... when does it end? The answer could be found in the streets of Minneapolis last night.

"We are never going to be satisfied," said an anonymous Black Lives Matter protester after Derek Chauvin received guilty verdicts in the George Floyd murder trial.

This woman represents the rage on the streets of America's largest cities that have been destroyed by Democratic mayors and city councils over the past several decades. She is angry, and that anger is being exploited by the very individuals who contributed to the conditions that brought rise to the anger in the first place.

And yesterday, the reactions from Democrats and their partners in the corporate-controlled, propaganda media told you everything you need to know about the conditions of race relations in America in the post-Obama and Trump era.

The adults in the room who understand our system of justice and recognize that our laws, courts, and law enforcement institutions are not designed to prevent people from doing evil acts, they are designed to render justice and punish those fallen human beings who will inevitably do evil things, should have rejoiced that our system works.

They should have rushed to the microphones and cameras to thank God for the US Constitution and our Founding Fathers for providing the greatest system of justice the planet has ever known.

They should have proclaimed that this guilty verdict proves that our system is not systemically racist and our judicial system, slow and methodical as it must be, ultimately works.

That's what they should have done, but they didn't.

Instead, they rushed to those same microphones and cameras to proclaim that this guilty verdict proves that we have a broken, systemically racist country, and this verdict means nothing. They used this guilty verdict to make a case for sweeping "reforms" that will castrate law enforcement efforts in America and make those very same African-Americans who have been convinced they are daily victims of cops actual victims of horrific criminal elements in their own neighborhoods.

Of course, if the jury had returned a "Not Guilty" verdict, these same politicians would be showing that the verdict proves that we have a broken, systemically racist country, and the verdict means nothing. The difference is they'd be making those statements while cable news shows video of cities burning, storefronts being smashed and looted, and cops in riot gear being attacked by Antifa thugs during "mostly peaceful protests."

Either way, you see the trap we are stuck in, right?

A not guilty verdict proves we have a broken, systemically racist country, and the judicial system and policing must be blown up, defunded, and reconstructed in the vision of Ibram X. Kendi.

Meanwhile, a guilty verdict proves we have a broken, systemically racist country, and the judicial system and policing must be blown up, defunded, and reconstructed in the vision of Ibram X. Kendi.

It's heads they win, tails the country loses when it comes to the politics of race and criminal justice in this country.

When does it end? It ends when the politicians, corporations, and media giants no longer benefit from dividing our country with hate and lies.

Now, it's on us to see that through.