A diplomatic disaster in Alaska

By Fred Fleitz | The Spectator 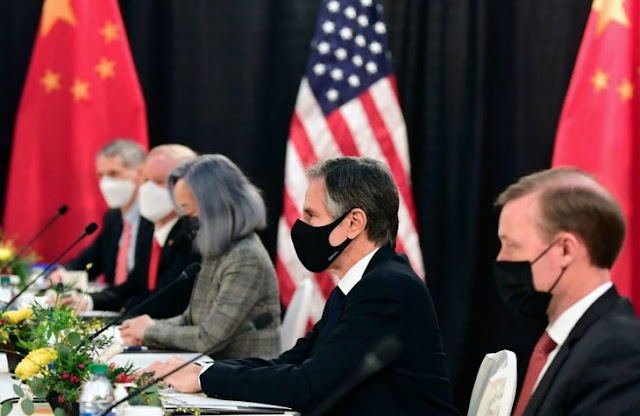 The US delegation meets with Chinese officials in Alaska (Getty)

Why the Biden administration’s meeting with Chinese officials was a debacle.

It goes without saying that when conducting high-level diplomacy, you don’t insult the other party at a joint press conference before the negotiations begin. And if you choose to do something so foolish, you must be ready when the other party retaliates in its response.

It is incredible that secretary of state Antony Blinken and national security adviser Jake Sullivan did not understand this when they began talks with their Chinese counterparts in Alaska yesterday. At what was supposed to be perfunctory two-minute statements by the US and Chinese delegations to the press before the talks began, Blinken and Sullivan criticized Chinese activities against the Uighurs, in Hong Kong and Taiwan, as well as for cyber attacks on the US and economic coercion of US allies. Blinken said China’s behavior ‘threatens the rules-based order that maintains global stability’. Sullivan added that ‘China has undertaken an ‘assault on basic values’.

Although Blinken and Sullivan needed to raise these issues with their Chinese counterparts, doing so publicly at a joint press conference deeply insulted them and needlessly damaged US-China relations. Chinese Communist party foreign affairs chief Yang Jiechi and foreign minister Wang Yi angrily responded with long diatribes against the United States which included accusing the US of human rights and freedom of the press violations. The Chinese officials also accused Blinken and Sullivan of being condescending and staging the Alaska meeting to embarrass China on US territory.

Blinken looked like a deer in the headlights when the Chinese officials responded. He and Sullivan obviously decided to criticize China at the press conference to counter Republican criticism that President Biden is weak on China. This was not diplomacy — it was virtue-signaling for America’s Biden-lapdog mainstream media. But it is inexplicable that Blinken and Sullivan were not prepared for a furious response by their Chinese counterparts.

Making this worse, the US criticism of China did not include one word on China’s criminal negligence that allowed the coronavirus to become a dangerous pandemic or the Chinese government’s continuing refusal to fully cooperate with international investigations of the origins of the virus, including allowing inspections of the Wuhan biolabs.

President Trump didn’t much care for diplomatic niceties, but he knew from his career as a dealmaker how to conduct diplomacy with America’s adversaries. When he appeared before the cameras with officials such as Xi Jinping and Kim Jong-un, Trump set a cooperative and optimistic tone. Trump also often bragged about his personal friendships with these leaders. The former president knew building trust through these personal relationships was part of what he called the ‘Art of the Deal’ to get these countries to the negotiating table and to strike deals with them.

The Alaska press event was a debacle that will build a perception that the US is returning to Jimmy Carter-like incompetence in foreign policy. It also confirms claims by Biden critics that his foreign policy team is headed by inept second and third-string Obama retreads.

America’s enemies are watching and planning how to cash in on President Biden’s weak and incompetent foreign policy.

Fred Fleitz, president of the Center for Security Policy, served in 2018 as deputy assistant to the president and to the chief of staff of the National Security Council. He previously held national-security jobs with the CIA, the DIA, the Department of State and the House Intelligence Committee staff.