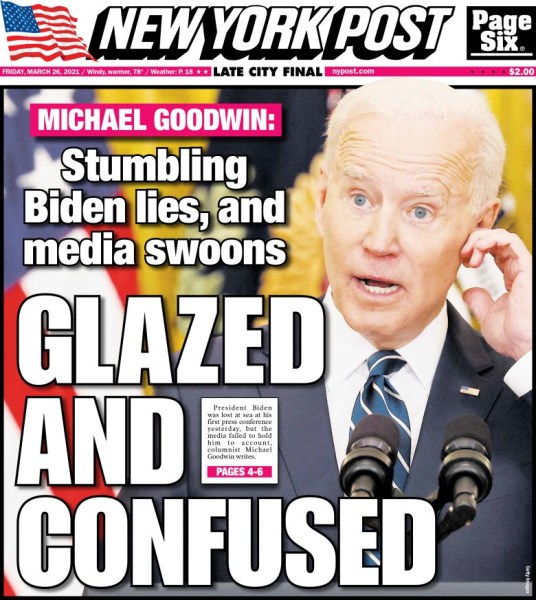 The leading feature of the spectacle was Biden’s infirmity. Flagging Goodwin’s column the cover of the New York Post duly noted it.

There was a whole lotta lyin’ (and cheatin’) goin’ on at the lectern when President Biden turned up for his first press conference yesterday. Michael Goodwin takes up the lyin’ in his New York Post column. His friends among the media made sure that they kept the degree of difficulty low. Biden was among friends. Michael Goodwin takes up these leading features of Biden’s performance in his New York Post column this morning. Goodwin bluntly calls it “a sickening spectacle.”

The historian and journalist Dominic Green concisely captured this aspect of the spectacle in Spectator column — whole thing here — at 4:06 p.m. (Eastern) yesterday afternoon: “The White House is no longer the home of democracy. It’s a reality TV series in a care home.”

And yet the infirm gentleman at the lectern required special assistance. The assistance came in the form of handy cheat sheets published in 14-point type labeled The President, just in case he forgot who he is or failed to summon his talking points from the vastly deep on his own power.

You can see the cheat sheets in the Daily Mail and in the New York Post. 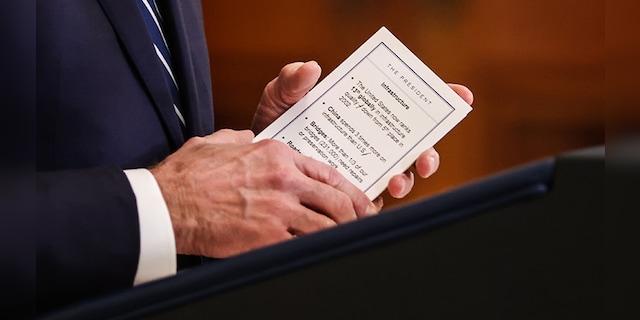 U.S. President Joe Biden holds notes on infrastructure while speaking during a news conference in the East Room of the White House in Washington, D.C., U.S., on Thursday, March 25, 2021.  (Photo by Oliver Contreras/Sipa USA/Reuters) 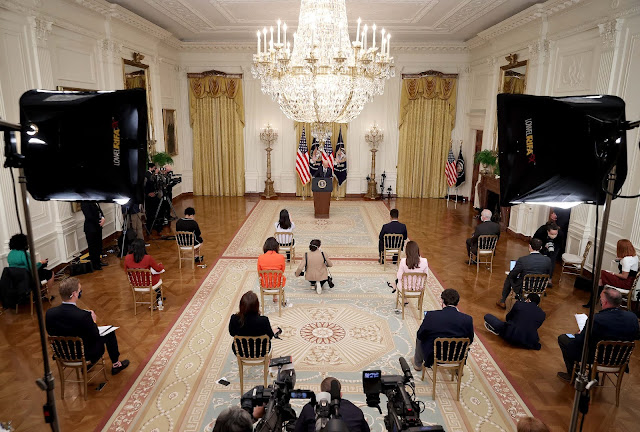 RedState’s Nick Arama offers more of both the cheat sheets and the headshots via Twitter. 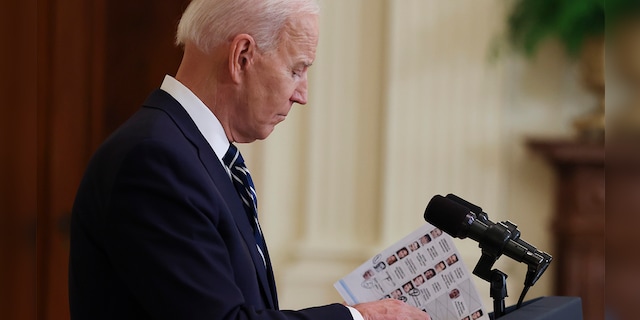 US President Joe Biden talks to reporters during the first news conference on March 25, 2021 in Washington, DC. (Getty Images)

The substance of Biden’s remarks was, if anything, worse than his apparent infirmity. Goodwin takes up this point as well. “A sickening spectacle” concisely captures it.

UPDATE: In his daily Examiner column, Byron York calls it “An embarrassing day for the White House press corps.” It was certainly that and more.

Biden lies, and the media doesn’t question it: Goodwin 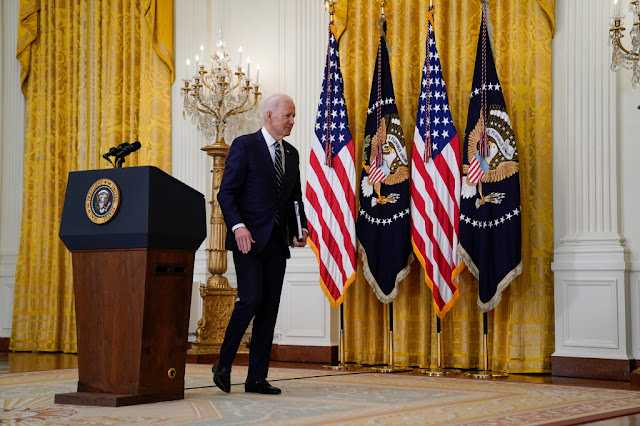 1. The leader of the free world is often lost at sea and says many things that are blatantly false.

2. The media is in the tank and cannot be trusted to hold him accountable.

3. Because of Nos. 1 and 2, America is headed for serious trouble.

For this sickening spectacle we had to wait 64 days?

Still, the event was meaningful in one distressing way. Now we know beyond all doubt there is no way to deny the terrifying truth.

This was Biden’s coming out party, and the nation faces a mess that will only grow worse with time. The man who campaigned on unity is hell-bent on permanent polarization, meaning cancel culture and the supercharged racial climate are here to stay.

Biden gave license to the worst instincts on the left with his repeated sneering references to all Republicans and especially Donald Trump. At one point, he actually accused Trump of letting immigrant children “starve to death on the other side” of the Mexican border.

Nor did anyone ask him why he read from prepared talking points during answers to three questions on foreign policy. No recent president has felt the need to do that.

There also were moments when he talked himself into dead ends, yet there were no questions about when he would release the health reports he’s been hiding.

Regarding his agenda, a report that Biden sees himself as the new FDR gives credence to the idea that he’s all in for every big, crazy idea left-wing Dems can cook up.

The Green New Deal, open borders, removing voting safeguards, endless tax hikes, statehood for DC — they’re all on track and bound for glory. The only obstacle is the Senate filibuster, which requires 60 votes to pass legislation, but Biden left no doubt he would be willing to do away with it.

“I want to get things done,” he said.

Each piece of his party’s planned utopia is unprecedentedly radical in its own way, but not nearly radical enough for the media. Their performance was pathetic not just in what questions they asked and didn’t ask, but how they asked them. The dominant theme was that Biden and his team are not moving fast enough to turn America upside down and inside out.

Why don’t you, when will you, why haven’t you? Over and over, the aim was not to ask a question but to speed up an agenda.

Naturally, this was the complete opposite of the way some of the same people behaved during the Trump presidency. Then the questions were outraged expressions that aimed at stopping the administration. Now they are pleas aimed at pushing this one forward faster.

As such, the 10 people Biden called on generally followed the script laid out in the Washington Post and elsewhere. Columnist Margaret Sullivan had warned reporters not to try to “show how tough” they were being on Biden to please “Trump allies.” She even downplayed the border crisis, suggesting it was getting too much attention.

It got the most attention Thursday, but only in ways that reinforced the idea that it is the milk of human compassion to invite Central Americans to make the long trek north. Violence is rampant and coyotes, human traffickers and the cartels are making a mint, but not a peep about that from the president or his media helpers.

Nor was there any hint that perhaps stricter enforcement was compassionate to Americans in border towns and taxpayers everywhere. Instead, the underlying assumption seemed to be that any suffering experienced by migrants once they got to the border was proof of heartlessness and had to be remedied as quickly as possible.

As for the pandemic, apparently it’s no longer a problem. Pictures showing migrants crowded together in cages and reports that many are released despite testing positive for COVID never came up. No sense spoiling the good vibes.

The facts of illegal immigration are fairly simple. Trump campaigned on the issue and after false starts and despite unified Democratic opposition, eventually stitched together a series of policies and actions that stemmed the tide. He built large sections of wall, deported criminal aliens and struck an agreement with Mexico that those making asylum claims would have to wait in Mexico.

It is also a fact that Biden blew up each of those pillars, yet now claims he inherited a mess. Strangely, he also insisted that the numbers surging now “happens every single, solitary year. Nothing has changed.”

He’s either misinformed or lying. Record numbers of arrivals are being reported daily, and NBC recently called the crossings the highest in 20 years.

Again, Biden was not challenged.

The final proof that the press has abdicated its role was clinched when the president refused to say when he would allow more media access to the border detention facilities. He said it would have to wait until his team got its new programs working.

If Trump had said that, the sky would have fallen and democracy would be declared dead. But when Biden says it, the media rolls over.

So add transparency to the list of things that don’t matter anymore.