'They Took a Vote and Then They Acted': Trump Honors the Heroes of United 93 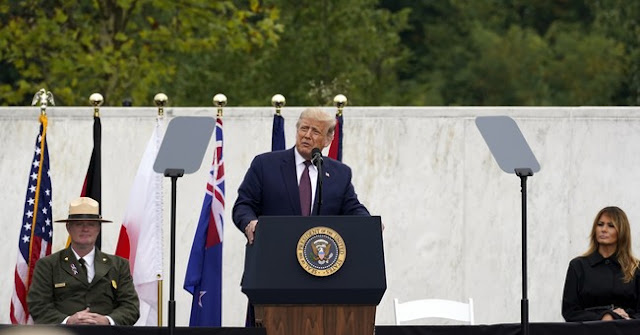 From Shanksville, Pennsylvania the president marked the anniversary of the 9/11 terrorist attacks by honoring the heroes of United Flight 93.

The president recalled the final moments before the flight crashed into a field in southern PA, forever remembered now in the immortal words of passenger Todd Beamer, who led a counter-attack on al-Qaeda terrorists who had taken over the cockpit.

Beamer was on the phone with GTE airphone supervisor Lisa Jefferson, who has since recounted the heroic tale of the United 93 passengers. He informed Jefferson that he didn't think they would make it but that he and a group of passengers and flight crew were going to charge the cockpit and stop the terrorists.

After asking Jefferson to tell his family he loved them and reciting the Lord's Prayer along with fellow passengers, Beamer put the phone down. But Jefferson heard what happened next.

That would prove to be the final transmission from Flight 93 just moments before the plane hit the ground at 500 miles per hour. Beamer and other passengers successfully took control of the aircraft from the terrorists and veered into the ground before the intended target could be reached.

On Friday, 19 years later, the president marked the uncommon courage and patriotism of those on board.

"When terrorists raced to destroy the seat of our democracy, the 40 of Flight 93 did the most American of things: They took a vote, and then they acted," he said. "Together, they charged the cockpit, they confronted pure evil, and in their last act on this earth, they saved our capital."

For Trump, the bravery of those on board also stopped the terrorists from succeeding in their goal of destroying American fortitude and spirit.

"When the moment came, when history called, they did not hesitate. they did not waiver. 40 towering patriots rose up, took charge, made their stand, turned the tide, and changed the course of history forever."

The president also mourned the lives lost in the attack in New York City and at the Pentagon, and honored the heroes that emerged after the attacks. Among others, Trump specifically honored the bravery of retired Marine Sgts. Jason Thomas and Davide Kearns, who led a rescue mission at Ground Zero. Moved to action by the blatant attack on Americans, The Marines traveled immediately to New York to aid in the rescue and recovery operation at Ground Zero. There, they found two Port Authority police officers buried in the rubble – Sgt. John McLoughlin and Officer Will Jimeno and secured their rescue.

The president also praised American resilience in the face of tremendous adversity.

"We were united by our conviction that America was the world’s most exceptional country, blessed with the most incredible heroes, and that this was a land worth defending with our very last breath. It was a unity based on love for our families, care for our neighbors, loyalty to our fellow citizens, pride in our great flag, gratitude for our police and first responders, faith in God — and a refusal to bend our will to the depraved forces of violence, intimidation, oppression, and evil."