Why Democrats must hide Biden from America 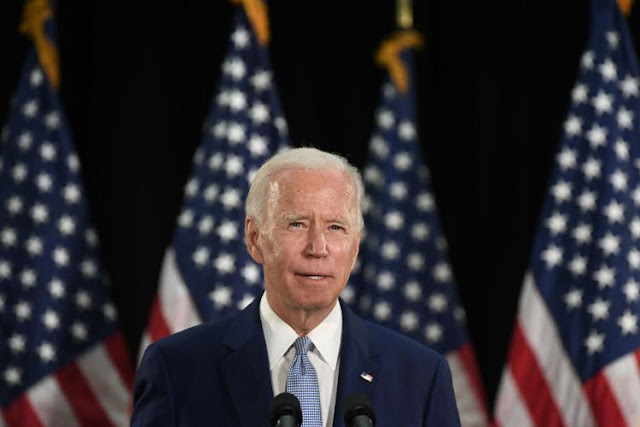 "I mean you've got the first sort of mainstream African American, who is articulate and bright, and clean and a nice-looking guy. I mean, that's a storybook, man."
– Joe Biden, about Barack Obama

Dan Quayle graduated with honors from DePauw University in Indiana with a degree in political science. While serving in the Indiana National Guard, he earned a Juris Doctorate at the Indiana University School of Law. After accomplished careers as an investigator for the Indiana attorney general and an assistant to Gov. Edgar Whitcomb, Quayle was elected to the U.S. House of Representatives in 1976. He was elevated to the Senate in 1981 where he served until 1989.

While Dan Quayle had a noteworthy career in state government, he stumbled on the national stage. As vice president for George H. W. Bush, from 1989 to 1993, he was widely ridiculed by the media as a political and intellectual lightweight due of his inability to articulate under pressure. As a result of exploitation and ridicule by the media over his many gaffs, after 1993 he vanished into obscurity.

When socialist Bernie Sanders became the new left folk hero, Nancy Pelosi and her comrades knew if lefty Sanders was the victor, selling him to hungry liberal voters would be tougher than peddling a fruitcake at an-after Christmas sale.

“We must win this election for the entire world.”
– Nancy Pelosi

Pelosi called a conclave of the “anti-Bernie cardinals” to choose anyone who could discredit Donald Trump’s success and replace him with a leftist stooge who’d willingly force new socialism down the throats of America. As they searched the archives of Sistine Chapel West, no roads led them back to Rome. So they “canonized” a rejected Catholic, Joe Biden, by default.

Although both Dan Quayle and Joe Biden share the same reputation for their inopportune gaffs and miscues, their parallels stop there. Dan Quayle was an honors student, a JD, with a proven history of ethical and successful public service. When he failed to make the transition to national office, after four years of fumbling through gaffs as a prime target for the media, he called it quits.

Biden, on the other hand, is like the Energizer Bunny that can no longer power a dime store flashlight. He doesn’t know when to quit. Unlike Quayle, Biden was a terrible student yet claimed he was on the honor role in law school. Yet he graduated in the bottom 10 percent of his class and was caught plagiarizing and almost expelled. He asserts he was a college professor but only gave three lectures in 2017.

“My dad use to say, always tell the truth or you will get in trouble.”
– Joe Biden

A review of Biden’s political record illustrates his checkered history, which borders on the criterion of dishonesty and unethical. The Senate he entered in 1973 was a bastion of insider backslapping, by a Democratic Party heavily influenced by segregationists mixed with Northern liberals and many moderate Republicans. Biden, eager to advance his career, allied with anyone and everyone who benefited him. And soon, senators on both sides of the aisle referred to Biden as “any-way Joe.”

For decades, Biden has changed his position on major issues more times than Barack Obama has said “change you can believe in.” He is known for protecting the interests of corporate donors and hiding his personal unethical affairs, such as in the Ukraine. This is the guy who spent four years as chair of the Federal Foreign Relations Committee, and eight years as chair of the Judiciary Committee.

Biden’s Senate voting record does not reflect the image he’s peddling to minorities and millennials. For 40 years, Biden was a chameleon. He authored the racially discriminatory 1994 imprisonment bill. Now he favors defunding police departments and diverting the money to identity group causes.

“I am comfortable defunding these departments and using the money for racial justice.”
– Joe Biden

When questioned about his zealous support for Obamacare and single-payer socialized medicine, he told this same group he never thought that government run health care would work in America. And he now advocates for more public options.

Biden criticized Donald Trump’s attempts to bring China to their knees with a new trade deal. He said: “China is going to eat his lunch? Come on, man, he can't even figure out how to deal with the fact they have this great division between the China Sea and the mountains in the east – I mean the west.” When Trump won the trade war, Biden retorted: “We need to get much tougher with China.”

During the Democratic primary debates, Kamala Harris challenged Biden for his longtime support of the Hyde Amendment, a law that prohibits taxpayer funding of abortions. Biden said he always favored funding abortion with or without Hyde. After the debate, Planned Parenthood said since he “no longer supported Hyde” they would endorse him, which they did unanimously one week later.

Biden avoids his decades-long record of race-baiting, praise for segregationist senators, and role as the architect of mass incarceration that disproportionately hurt Black Americans. In 1975, as a freshman senator, Biden sponsored a bill to restrict the federal power of school desegregation with busing. Biden wrote he did not wish to force busing on Delaware families. Civil rights lawyer Jack Greenberg said, “Joe Biden heaved a brick right through the window of school integration.”

Biden claimed busing would turn schools into racial jungles. He also stated, “A rejection of the black awareness concept, where black is beautiful, and black culture and identity must be studied.” Yet when chosen as Obama’s running mate, he said the GOP would put black Americans “back in chains.” Recently, he called Trump supporters’ sexist, racist bigots, and said “Blacks who do not support him are not Black?” America will never know which Joe Biden to vote for on Election Day?

Boxer Joe Louis said, “He can run, but he can't hide," yet that’s what Biden does best. All the leftist propaganda in America can’t hide Biden’s past. The left is running scared. If he is forced to debate Trump, it will expose his ambiguous campaign promises as more hot air at a local whistle-stop. Biden spent decades befriending segregationists, passing laws to incarcerate minorities, and supported trade deals to export American jobs to China. No wonder China said they support him!

Biden was the left’s booby prize. That’s why he is locked in a cage until after the election and why they will not allow him to debate President Trump. With his obvious cognitive impairment about his flip-flop views on race, abortion, law enforcement, Obamacare, police, gaffs and lies to defend, he could suffer an epic meltdown on national TV. Can the greatest country on the face of the earth take a chance electing someone president whose word is worth less than the Colombian peso?

“I’m trying to say without boring you, and you all look dull as hell, I might add. The dullest audience I have ever spoken to. Just sitting there, staring at me. Just pretend you like me!" (Joe Biden)