If He is Ahead on Election Night, President Trump Should Declare Victory 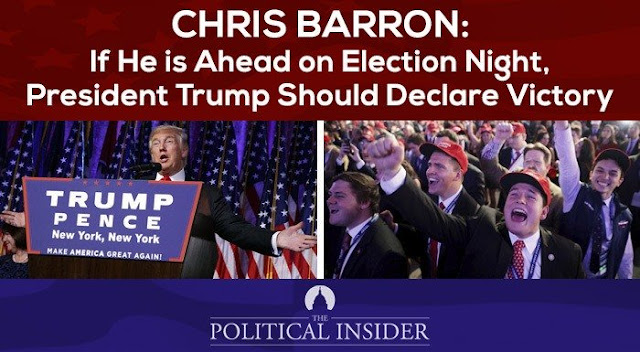 Earlier this month, a Michael Bloomberg funded data and analytics firm, Hawkfish, laid the groundwork for the left’s war on the legitimacy of November’s Presidential election results.

In an interview with Axios, Hawkfish’s CEO, Josh Mendelsohn said:

“We are sounding an alarm and saying that this is a very real possibility, that the data is going to show on election night an incredible victory for Donald Trump,” he said.

“When every legitimate vote is tallied and we get to that final day, which will be some day after Election Day, it will in fact show that what happened on election night was exactly that, a mirage,” Mendelsohn said.

“It looked like Donald Trump was in the lead and he fundamentally was not when every ballot gets counted.”

Democrats Will Not Concede The Election

Bloomberg’s cronies didn’t even try to hide their intentions in their interview, making it clear exactly what this effort was really all about:

“The group is also trying to sensitize state and county elections officials, news and social media organizations, and the courts to the perils of premature results — and to the possibility of Trump and his team applying challenges and political pressure to reject a high share of mailed-in ballots counted after election day.”

Let’s be absolutely crystal clear here: Democrats are trying to pressure government officials and media organizations into not calling states for Trump on election night because they intend to litigate the result – no matter what the numbers say.

The left learned a valuable lesson from 2000. The moment on Election Night that networks called the Presidency for George W Bush – and the moment Al Gore called Bush to concede – Democrats lost a powerful messaging tool.

Instead of a seeking to get to the bottom of an unknown outcome, Democratic challenges to the results in Florida felt more like an opportunistic attempt to steal an election.

Who can forget the Sore-Loserman signs, hats and t-shirts that popped up everywhere between the election and Gore’s second concession in mid-December?

This is something the left desperately wants to avoid in 2020, which is why they are trying to get out in front of the issue and discourage any outlet from calling the election for President Trump on Election Night.

President Trump Should Declare Victory If He Wins On Election Night

If President Trump is ahead handily, which I expect to be the case, and it appears he will win the Presidency, then President Trump should absolutely declare victory on Election Night.

And right of center news outlets like Fox News and OAN should also declare him the winner.

If the results on Election Night, which will be a combination of votes cast that day (which will favor Trump) and those cast in-person and early (which will favor Biden) show an overwhelming victory for President Trump, then that’s exactly what should be called.

This doesn’t mean that Joe Biden cannot win the Presidency on the basis of mail-in votes, but it does mean that the presumption should be in favor of the most-trustworthy ballots: those cast in-person.

If Joe Biden and his campaign team want to launch a legal challenge to the results, they are free to do so.

But they should have to carry the burden of establishing that the mail-in ballots on which they are relying were cast by actual registered voters in compliance with the laws of the states in which they were cast.

Christopher Barron is President of Right Turn Strategies. He is a contributor to The Hill, and a regular on the Kennedy Show on FOX Business and Unfiltered on Headline News. He was a media surrogate for the Trump campaign and organize d LGBT for Trump.