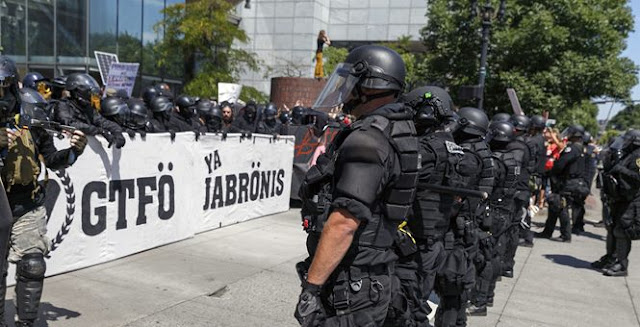 Mr. President, you've taken step one: declaring antifa a domestic terrorist organization. That was a brilliant move. Now it's time for step No. 2: Cut the head off the snake. We've got to aggressively cut off the funding for domestic terrorism.
Those who provide funding are terrorists themselves. Who is providing the funding? There are many suspects. Suspect No. 1 is globalist billionaire George Soros and his Open Society Foundations. It starts there.
Is Soros guilty? That's way above my pay grade. That's why we need a global investigation.
I'm sure there are many other millionaire and billionaire socialists and globalists involved. It's time to make them run for their lives. If found guilty, it will be time to freeze their assets and hunt them down.
My fellow Americans, we are at war. We must face it head-on. Evil globalist and socialist elites are out to bring down and destroy America. Their political arm is the Democrat Party. Their propaganda arm is mainstream media and social media. Their funding arm is Hollywood and Silicon Valley. Their brainwashing arm is made up of millions of Marxist public school teachers and college professors. And, as we are now seeing on the streets of U.S. cities, their military arm is antifa.

There's no need to question what's happening. You can see it with your own eyes. This nationwide rioting, looting, burning and attacks on police is all clearly coordinated by allies of the Democrat Party: socialists; Marxists; communists; globalists; radical, extreme open-borders madmen. They are carrying out a detailed plan of domestic terrorism.
I learned this strategy at Columbia University with my classmate Barack Obama. It is called the Cloward-Piven strategy. All the elitist kids I met at Columbia believed in this plan. They all bragged about being socialists and communists. They hated America, capitalism, wealthy business owners and, perhaps most of all, white people.
Sigmund Freud would have had a field day with my vicious, intellectual, self-hating, liberal classmates because they were all the things they hated: white, rich and the children of wealthy business owners.
My classmates repeated over and over that they wanted to overwhelm the U.S. economic system, bankrupt the wealthy, close all the businesses and burn it all down.
Look around. It's happening, first with the lockdown and closure of the U.S. economy because of media hype, hysteria and exaggeration about the COVID-19 pandemic.

And when that didn't finish the job, they moved to plan B: riots, unrest, looting and torching businesses.

There's no need to debate. It's all happening in front of our eyes. We are at war.

It's no accident that Democratic governors and mayors are fighting the hardest to keep the economy closed.

It's no accident that antifa thugs are showing up with bricks and Molotov cocktails to lead riots and burn cities.
This is no amateur hour. This was planned, organized, coordinated and funded by our enemies. Thugs are being bussed and flown into big cities to lead riots. Their weapons have been delivered to protest sites ahead of time. And where did all the violent thugs and hooligans come from? The liberal district attorneys (in many cases, put in place by the funding of George Soros and others like him) let the felons out of prison. Someone will pay for all of this. It's time to take aggressive action and prove who will pay.

Here is a plan, Mr. President, to stop the unrest and end the crisis.

1. Cut the head off of the snake. Just like the battle against Islamic terrorism, follow the money. Order a worldwide investigation into the funding of domestic terrorism. Suspect No. 1 has to be Soros and his Open Society Foundations. But there are many more wealthy globalists and socialists involved.

2. Sign an executive order tripling prison sentences for any felony committed during riots or unrest. These are hate crimes. These offenses deserve special harsh punishment under the umbrella of domestic terrorism.

3. Bring in the National Guard when circumstances warrant, with or without the approval of Democratic governors. A brave young police officer was shot in the neck during a Black Lives Matter protest here in Las Vegas.

As of this writing, he is in grave condition, on life support. He might have very well been home with his family and healthy if the National Guard had been on the streets that night, backing up police. We can't afford to wait for Democratic governors to act.

5. Intercept all those piles of bricks left by antifa at protest sites across the USA; load them onto trucks; drive them to the U.S-Mexico border; and use them to build our wall.
WE ARE AT WAR. It's time to take aggressive action. And it's time to pick a side. You are either for making America great again ... or you are against it. If you're against it, you are an enemy of the United States of America.
Wayne Allyn Root is a CEO, entrepreneur, best-selling author, nationally-syndicated talk show host on USA Radio Network at 6 PM to 9 PM EST/3 PM to 6 PM PST. To find out more about Wayne Allyn Root and read features by other Creators Syndicate writers and cartoonists, visit the Creators Syndicate website at www.creators.com.

George Soros, 89, is still on a quest to destroy America 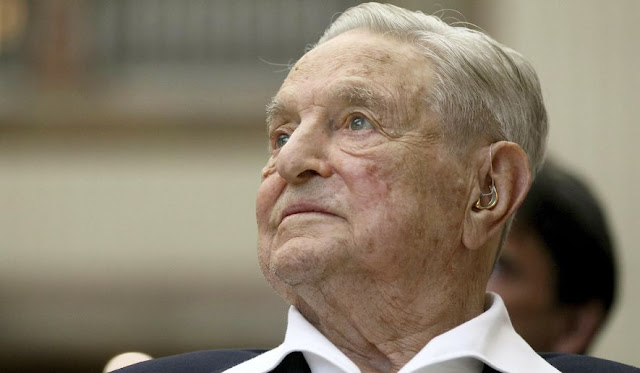 George Soros is 89 years old, but by gosh, before he dies, he’s going to see to the internal destruction of America.

At least that’s how it seems.

How else can we listen to his words in Davos, Switzerland, track his funding of American political races and pay attention to what he says about President Donald Trump, capitalism, and the leftist causes he backs and the leftist Open Society Foundations he runs, and come to any other conclusion?

In the last few years, Soros has taken to trying to take over local law enforcement agencies by pumping massive amounts of money into candidates he favors in key district attorney races.

“George Soros’ quiet overhaul of the US justice system,” Politico reported, way back in August of 2016.

It continues in present day.

“PAC funded by George Soros pumps nearly $1 million into local races for prosecutor,” The Washington Post reported in June, about the money from the Justice and Public Safety PAC that went to the left-leaners of both Arlington County, Virginia, and Fairfax County, Virginia, commonwealth’s attorney races.’

The district attorney’s office is one of the first local lines of defense of the Constitution and the rule of law. That means the potential for immediate progressive impact is huge — and it’s an impact that can be had without all that costly political fighting over, say, a senator’s seat, or a Supreme Court slot.

Buying D.A. seats gives you good bang for the buck, in other words. And oftentimes, quietly, unbeknownst to those who might oppose.

That doesn’t mean Soros isn’t busily buying into congressional races, too. or the media. Or — and this, particularly in recent months — the grassroots.

Democracy Alliance, a nonprofit founded in 2005 to advance a progressive vision throughout America, and funded by wealthy elites, recently shifted its charitable giving strategy from think tanks in high-powered Washington, D.C., to small, mostly unknown groups in various communities. Why?

Call it — once again — under-the-radar influence.

Politico in 2018 described the process: “Kevin Rodriguez, a 19-year-old aspiring singer in tight jeans and gray-and-white Nike high tops, had never heard of the powerful progressive donor group Democracy Alliance. But he is a key part of the secretive billionaire club’s plot to flip the Sun Belt. The donor clique, which counts George Soros and Tom Steyer among its members, is quietly giving funds to a handful of local grassroots groups like Rodriguez’s employer, Living United for Change in Arizona.”

It’s a strategy aimed at quietly taking down President Donald Trump, one “new voter in rapidly diversifying states across the southern U.S.” at a time, as Politico wrote.

It’s a strategy that skirts the enemy’s knowledge, and therefore, oftentimes, the enemy’s win.

It’s one thing for Soros to take his hatred of this president and his disdain for free market America to the public stage — as he just did in Davos, when he criticized Trump as a “con man” whose “narcissism” has turned “into a malignant disease,” as CNBC reported.

It’s another for Soros to slide, on the sly, his anti-American influences deep into America’s politics and culture. And now: education.

In Davos, he announced the infusion of $1 billion into a new Open Society University Network to fund schools around the world — to “educate against nationalism,” is how the Financial Times reported it.

In other words: to train the next generation in the evils of sovereignty — to teach the emerging youth how to become good obedient citizens of the world.

Soros calls it his “most important and enduring project” ever. No wonder. It truly could be. If successful, it could mean the collapse of borders, the implementation of world government, the end of America as we know it.

If children are the hope of the future, America’s children must be educated on the greatness of America — before it becomes too late and America, as a sovereign nation, hasn’t any future at all.

Cheryl Chumley can be reached at cchumley@washingtontimes.com or on Twitter, @ckchumley. Listen to her podcast “Bold and Blunt” by clicking HERE. And never miss her column; subscribe to her newsletter by clicking HERE.