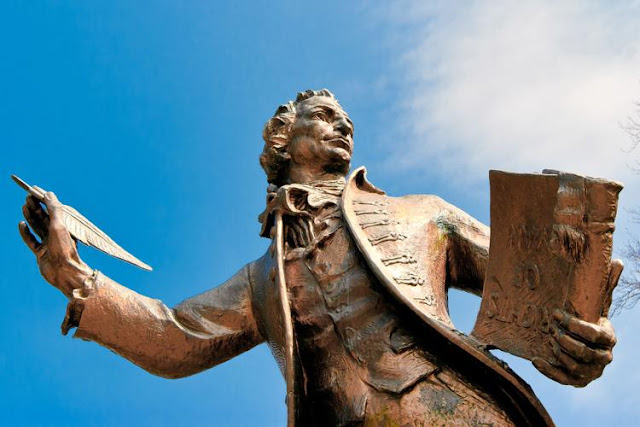 “To argue with a man who has renounced the use and authority of reason, and whose philosophy in holding humanity in contempt, is like administering medicine to the dead.”
– Thomas Paine

In 1980, when Ronald Reagan accepted his party's nomination for president, he reminisced about our nation’s past and its "shared values." He mentioned how far America had drifted from the ethos of our founding of national unity, individual responsibility, with a patriotic and a limited government. He called for a return to the spirit of principles and ideas of Thomas Paine’s, “Common Sense.”

Of all our great founders whose ideas he wanted for America, Ronald Reagan quoted the one who was not honored as a founder, Thomas Paine. Although he inspired and unified the colonies with enlightenment teachings, Paine was considered too radical to attend the Convention of 1787. And his insight into our socio-political future was never reflected in the writing of our Constitution.

In 1774, Ben Franklin told Thomas Paine he was needed in the New World. Within months Paine was editor of the Philadelphia Magazine, where he penned the ideals that unified the colonies and brought them to revolt. Paine wrote, “America was in a crisis.” Until they had undivided unity, they’d never become a nation.

“We have it in our power to begin the world over again.”
– Thomas Paine

When Paine arrived in America, the colonies were unhappy as servants to the crown. But they were content with what America gave them and tolerated British abuse. When Paine wrote his pamphlet, “Common Sense” aka “The American Crisis,” he wanted to alert the colonies: until they worked for the collective good of a nation united under one flag, they’d always be in a state of constant crisis.

In contrast, to many founders who were educated with money and status, Paine was philistine and appealed to commoners. “Common Sense” is considered the crucial tool used to bring the idea of sovereignty to middle class colonials and challenged them to revolt.

“Without the pen of the author of 'Common Sense,' the sword of Washington would have been raised in vain.”
– John Adams

During the Revolution when Washington’s army was on the verge of defeat, he asked Paine if he would read passages of “American Crisis” to troops at Valley Forge. The genesis of Paine’s work was a copious enlightenment theme of axioms that formulated the caliber of the American Dream. Paine believed that unity and respect for the rights of man were the only way society could survive.

If Paine had been at the Convention, our country would be different today. They denied him entry since his wish-list to end slavery, grant universal suffrage, and to establish a parliament that could be replaced when they did not act in the people’s best interests were judged too radical at the time.

“Let them call me a rebel, and I welcome it. I feel no concern within my soul.”
– Thomas Paine

Reflecting back, Paine’s clairvoyance was uncanny. It took decades for women to get the right to vote. Our republican democracy, without the ability to issue a no-confidence vote for incompetent lawmakers, has come back to haunt us since the first Congress met in 1789. It took a bloody Civil War to end slavery, which resulted in a new crisis that took another 100 years to bring to an end.

Confederate John Wilkes Booth planned to kidnap President Abraham Lincoln during the Civil War and take him to the Confederate capital, Richmond, but his plot failed. So when he learned Lincoln would be at Ford Theater on the eve of April 14, he shot him in the head and exclaimed, “The South is now avenged.” Lincoln’s murder put pro-slavery Democrat Vice President Andrew Johnson in charge of Reconstruction, which resulted in chaos and social unrest that would haunt America for centuries!

Lincoln’s Republican Congress approved a Reconstruction program that guaranteed political and civil rights for Southern blacks. But when Johnson took office, he convinced the Democrats to block black suffrage and civil rights programs. Johnson vetoed bills providing provisions for the displaced slaves and military trials for those accused of violating the rights of all black Americans. He vetoed the Republican Civil Rights Act of 1866 and refused to sign the 13th, 14th and 15th amendments.

Andrew Johnson continued to lobby Democrats to block all Reconstruction programs. Instead of helping to assimilate former slaves into society, he rebuilt the southern segregationist wing of the post war Democratic Party. He allowed Democrats to manage their own Reconstruction programs, which opened the door for them to replace the institution of slavery with the institution of segregation.

On Feb. 24, 1868, the House inevitably impeached Andrew Johnson and filed 11 charges against him for violating the Tenure of Office Act and the Command of the Army Acts and bringing disgrace to his office. But the Senate failed to convict him by one vote and he avoided conviction. If our nation had a parliamentary system, as Thomas Paine had proposed, a prime minister who lost the support of the legislature could have been simply removed from office by a no confidence vote.

The racism of Andrew Johnson and his refusal to enforce legislation to acclimate former slaves into American society enabled southern Democrats to deny the rights of black Americans and chattel them into second class citizenship. It took 100 years of blood, sweat and tears to finish the tenants of Republican Reconstruction that Lincoln had already approved. If Thomas Paine had been invited to the Convention, we could have abolished slavery in 1787 and changed the course of our history.

Thomas Paine told us, “Character is much easier kept than recovered.” Paine is considered one of our greatest Enlightenment thinkers. Since he came from the working class he knew their problems and how to remedy them. He was a self educated brilliant writer and thinker who foresaw the future and passionately alerted others of the necessity to correct socio-political problems expeditiously, or face the consequences in the future.

“He who dares not offend cannot be honest.”
– Thomas Paine

Why does history repeat itself: Because we don’t profit from our mistakes. We’ve spent years trying to correct the sins of our past. But without education and civic leaders demanding teachers instruct our youth “true American history,” students will grow up unaware who created their problems and who has always tried to remedy them. As a result, we’ll always have people who continue to blame the wrong people for their failures and admire those who caused them. Until they know their history and take responsibility for their actions, they will always be a liability and never an asset to society; because:

“Reason obeys itself and ignorance submits to whatever is dictated to it.”
– Thomas Paine

https://www.thecentersquare.com/national/op-ed-the-american-crisis-250-years-after-thomas-paine/article_ea9b0b4a-b483-11ea-9dac-bb77cb17624c.html
Posted by Frances Rice at 9:49 AM