By Ryan Lovelace | The Washington Times 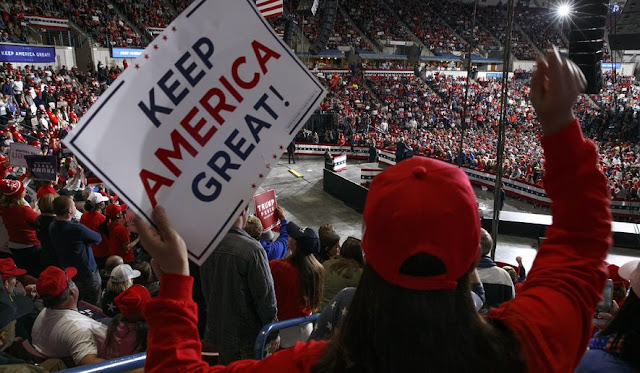 In this Feb. 28, 2020, file photo, supporters of President Donald Trump cheer as he speaks during a campaign rally in North Charleston, S.C. (AP Photo/Jacquelyn Martin, File)

Trump campaign manager Brad Parscale said Sunday that several hundred thousand people have requested tickets for President Trump’s looming Oklahoma rally, while some public health officials are fretting over the rally and Mr. Trump’s return to the campaign trail amid the coronavirus outbreak.

“Just passed 800,000 tickets,” Mr. Parscale tweeted on Sunday morning. “Biggest data haul and rally signup of all time by 10x. Saturday is going to be amazing!”

Mr. Parscale previously tweeted that the campaign was looking to add a second event in Oklahoma to accommodate the throngs of people eager to see the president.

Mr. Trump’s coming rally in Oklahoma on Saturday has rankled some public health officials that worry about the spread of coronavirus. Dr. Scott Gottlieb, former Food and Drug Administration commissioner until 2019, told CBS on Sunday that he does not think holding the rally is a good idea.
...
Mr. Trump’s team has not heeded Dr. Gottlieb’s advice but it has encouraged those attending the Oklahoma event to take proper precautions.
...
The campaign is also requiring people who wish to attend the rally to waive the Trump campaign’s liability if the rally-goers get coronavirus. 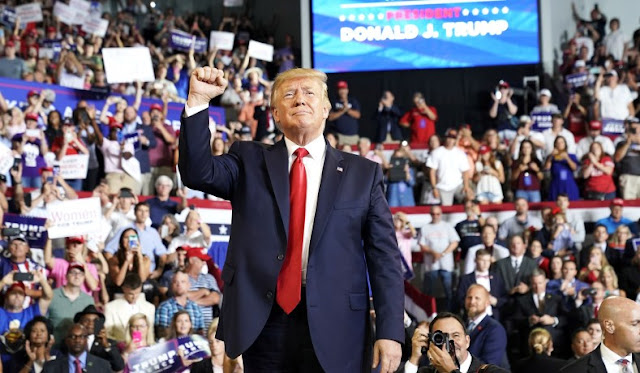 Are Democrats fired up for the 2020 election? Undoubtedly. But are they as fired up as Republicans? I don’t think so. A number of polls have found more intensity on the GOP side, but what makes me think of this question is (via InstaPundit) this headline: Trump campaign says ticket requests for Oklahoma rally surpass 800,000. That’s enthusiasm!

Then there is the fact that, even though there was no race on the Republican side, primary vote totals for President Trump often exceeded the combined totals for all Democratic presidential candidates, and easily surpassed the numbers cast for President Obama in 2012. This happened recently in Georgia, but it was true when there was still a genuine contest on the Democratic side, too.

Michael Moore and I were two of the very few pundits who predicted Trump’s win in 2016. Now Moore is warning Democrats not to underestimate the intensity of the Republican base’s support for the president, as Trump himself tweeted: 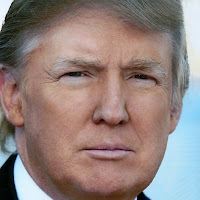 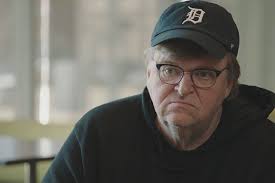 “Rage” is liberal-speak for the deep concern so many of us share that the Democrats’ far-left, anti-American agenda would destroy our country. It translates into voter intensity.

The Democrats know they can’t match Republicans’ eagerness to go to the polls, so they have come up with an alternative–no one goes to the polls. Instead, we have a mail-in vote system in which many millions of ballots are mailed to people who have died, moved or are ineligible to vote. Those ballots will fall into a wide variety of hands, but the Democrats know that law-abiding Republicans won’t fill them out and fraudulently send them back. Many Democrats will.

In order to combat voter fraud, Republicans need a wide advantage in voter enthusiasm. At the moment, I think they have it. 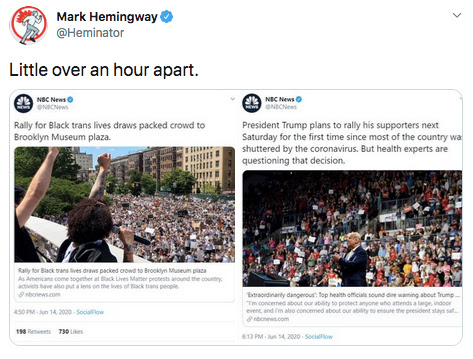 Plus: During Massive Protests, Two Pro-Life Women Arrested for Violating Social Distancing in NYC. Why is De Blasio so afraid of these strong black women? 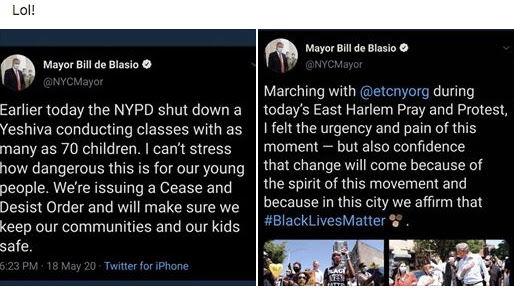 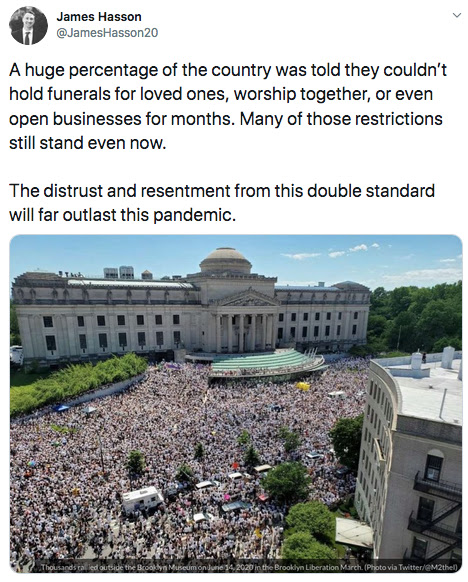 The rules are different for the Dem machine’s clients. They aren’t even pretending anymore.
Posted by Frances Rice at 11:56 AM