How the Obama Administration Failed to Support HBCUs 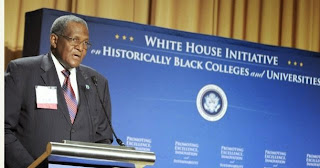 The appropriation calls for some major questions: Why were the grants, intended to support students of minorities, only given to 3 HBCUs? Were the rest of the 103 HBCUs not qualified for this funding? What was the intention of giving this federal funding to white institutions who serve minorities in a far lesser capacity than HBCUs?

“HBCUs were serving first generation, minority and low-income students when some of these institutions [PWIs] were denying their entry or were not in existence,” said Hampton University President Dr. William Harvey, blasting the federal government for the lack of support of Black colleges.

The Obama Administration has failed to financially support HBCUs with government funding like it does to PWIs–PWI’s never have to worry about the lack of governmental funding.

However, the more perplexing issue is that the White House Initiative on HBCUs task is to primarily  “…overcome the effects of discriminatory treatment and to strengthen and expand the capacity of historically black colleges and universities to provide quality education.”

Marybeth Gasman, an Associate Professor at University of Pennsylvania, wrote in, “Comprehensive Funding Approaches Historically Black Colleges and Universities” that Black colleges have a “proven track record of successfully educating African American students, especially those from low-income and underprepared backgrounds.”

“Given President Barack Obama’s push to increase the percentage of citizens with higher education—and given the country’s changing demographics (we will soon be a country with a majority of minorities)—it is essential that HBCUs thrive. They must be out in front demonstrating for the rest of higher education how to provide a sound education to African Americans and other students of color. Equal and consistent federal, state, and private funding will make HBCUs stronger and more viable institutions.”

It is evident that HBCUs are not treated fairly, and one of the potent variables of HBCUs success, especially today, is receiving government funding fairly.

Furthermore, President Obama and the entire White House Initiative on HBCUs should both think about how to solve this issue. And fast.