13 Facts About Ferguson the Media Will Never Tell You 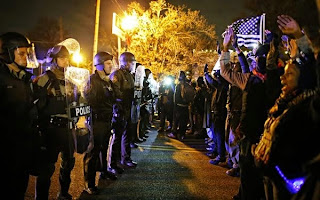 According to protesters who erupted in violence after a grand jury declined to indict Officer Darren Wilson in the shooting death of Michael Brown in Ferguson, Mo., this was the case of a white policeman shooting an unarmed black teenager with his hands in the air in a community plagued by racial tension.

That's an account promoted by many in the mainstream media as well. But here are several facts about the case that are harder to find:

1. Surveillance video showed that shortly before the confrontation, 18-year-old Brown stole cigarillos from a convenience store and shoved a clerk who tried to stop him.

2. The autopsy report showed that Brown had marijuana in his system when he died.

3. Officer Wilson, driving to the call of a medical emergency, first encountered Brown walking in the middle of a street and told Brown and his friend to walk on the sidewalk. Brown responded with an expletive.

4. Wilson chose to confront Brown only after he saw the cigarillos in his hand and recalled the radio report of a robbery at the convenience store.

5. Wilson said when he tried to open his car door, Brown slammed it back shut, then punched Wilson in the face.

6. Fearing another punch could knock him out, Wilson drew his gun, he told the grand jury, and Brown grabbed the gun, saying "you are too much of a pussy to shoot me."

7. An African-American witness confirmed that Brown and Wilson appeared to be "arm-wrestling" by the car.

8. Another witness saw Brown leaning through the car's window and said "some sort of confrontation was taking place."

9. After Wilson fired a shot that struck Brown's hand, Brown fled and Wilson gave chase. Brown suddenly stopped. An unidentified witness told the grand jury that 6-foot-4, 292-pound Brown charged at Wilson with his head down. Wilson said Brown put his hand under the waistband of his pants as he continued toward Wilson. That's when Wilson fired.

10. A witness testified that Brown never raised his hands.

11. Gunpowder found on the wound on Brown's hand indicated his hand was close to the gun when it fired. According to a report, the hand wound showed foreign matter "consistent with products that are discharged from the barrel of a firearm."

12. Judy Melinek, a forensic pathologist who reviewed the autopsy for the St. Louis Post-Dispatch, said the gunpowder "supports the fact that this guy is reaching for the gun, if he has particulate matter in the wound."

13. Wilson said Brown was physically uncontrollable and "for lack of a better word, crazy." He said that during the confrontation, he was thinking: "He's gonna kill me. How do I survive?" Legal experts say police officers typically have wide latitude to use deadly force when they feel their safety is threatened.