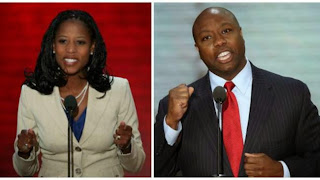 Utah’s Mia Love and South Carolina’s Tim Scott certainly had a lot to celebrate last night as the results came in. The two black Republicans made U.S. history with their election victories.

Last election season, Love was only narrowly defeated by the incumbent, Democratic Rep. Jim Mattheson, by less than 800 votes — total. Despite her loss, she was an instant hit with the Republican party — she even gave a speech at the Republican National Convention! This time around, Love won a seat at the House, making her the first black

Republican woman in Congress but also the first ever Haitian-American ever in Congress.

Scott was already in the Senate when he ran this year, but he hadn’t been elected. Governor Nikki Haley appointed him after Senator Jim DeMint resigned in November 2012, so this year’s race against Democratic challenger Joyce Dickerson was about finishing out the rest of DeMint’s six-year term. Scott will have to run for re-election in 2016 to earn a full six-year term himself. But he has already made history nonetheless — his win marks the first time an African-American has been elected in the South to the Senate since Reconstruction. The win also makes him the first ever African-American to serve in both the House and Senate.

These two historic wins are surely steps forward in the legacy of our national elections. That’s definitely something to celebrate no matter your party affiliations.