Time For Blacks To Leave Democrats Behind 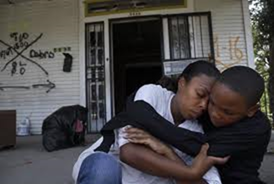 If there's one demographic Democrats never have to worry about, it's African-Americans. The black vote has traditionally gone to Democrats in a landslide, and the man at the top of the ticket seldom makes a difference. 95 percent of black voters pulled the lever for Obama in 2008, of course, but that's only slightly more than the 91 percent that voted for Walter Mondale in 1984. Blacks vote Democrat; it's that simple.

The question is: why?

With an established pattern of voting going back decades, one would think that Democrats would have, by now, done something positive for their number-one constituents. But one look at the record shows that this isn't the case.

Black unemployment is still out of control, the nation's schools are failing black children in almost every conceivable area, and blacks still struggle mightily with crime, poverty, and incarceration. Even with a black man in the White House, nothing has changed.

Democrats Have Their Own Interests

It's time for black voters to take a close look at their allegiance to the Democratic Party. President Obama's decision to provide amnesty to roughly 5 million illegal aliens should give any black voter pause. How does this move serve the black community? When black people are already suffering from scarce job opportunities, how will an influx of newly-legal workers affect their prospects of solving the unemployment problem?

While Democrats have not always enjoyed power on the national stage, they have presided over most of the country's minority-rich cities for the last fifty years. Their leadership must therefore be called into question when we see the state of things in New Orleans, Chicago, Detroit, Baltimore, and other cities where violence, drugs, and gang warfare have ruined once-great communities. Their policies have failed, full-stop.

And now that they have cemented themselves as the party of black voters, Democrats can turn their attention towards shoring up the Hispanic vote as well. If history is any indication, illegal immigrants would be better off jumping back over the fence than submitting to Democrat rule.

Other than illegals themselves, no one wants to see deferred deportations more than the businesses that take advantage of them.

By paying undocumented workers less than the minimum wage, these businesses are able to exploit human labor in an unsavory and unethical way.

At the same time, they shut the doors of employment to lower-skilled, entry-level workers, many of whom are black. In catering to illegals, the Democrats have essentially chosen big business over lower-middle class individuals. There is no way to square this with their supposed ideological aims, but it fits perfectly in with their actual goals.

Democrats don't want an educated, successful generation of African-Americans (or any minority, for that matter). When people realize their capacity for independence, they begin to resent those who haven't. They begin to see how these dependency programs have the opposite of their intended effect. They begin to question why so much of their paycheck is going to people who don't care to work for one of their own. And they begin to vote Republican.

When your party's existence is contingent on a permanent underclass, there is a conflict of interest. Once black voters see this conflict, the game is up for Democrats. It's just a matter of when.