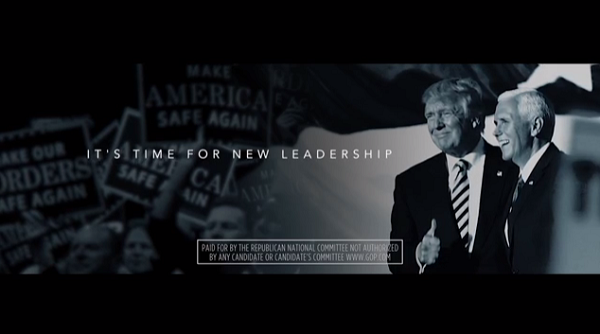 As part of his vision of providing our country with new leadership and promoting our shared mission of making American great again, Donald Trump endorsed the re-election of House Speaker Paul Ryan, Senator John McCain and Senator Kelly Ayotte.

Meanwhile, the Democrats are in disarray.

Democrat VP nominee Tim Kaine is coming under scrutiny for trying to send a man who confessed to a gruesome double murder in Virginia to Germany where he would have faced a lighter sentence.


The Daily Beast reports: On March 30, 1985, friends found the bodies of Derek and Nancy Haysom in their home in Bedford County, Virginia. Derek was 72 and Nancy was 53. Their throats were slit from ear to ear.
The double murder terrified their small, central Virginia community. And it could have political repercussions to this day.
At issue is Tim Kaine’s decision to extradite the Haysoms’ killer, Jens Soering, to Germany.
The move would have substantially reduced his prison sentence if Kaine’s successor hadn’t blocked it.
Kaine’s allies say he made the right decision for the right reasons. But Virginia Republicans say Kaine’s efforts to extradite Soering could hurt his vice presidential bid—especially given the tough-on-crime focus of Donald Trump’s campaign.


Hillary Clinton won’t stop lying about the FBI’s findings in her email scandal.


The Washington Post Fact Checker reports: One would think the talking points would change after receiving Four Pinocchios from The Washington Post Fact Checker, “Pants on Fire” from PolitiFact and “false” from FactCheck.org.
But, nope, Clinton fell back on a claim that has been roundly debunked by fact checkers.
FBI Director James B. Comey did tell Congress: “We have no basis to conclude she lied to the FBI.” But lying to the FBI is a criminal act; it’s a rather low bar for truthfulness.
Clinton continues to twist this statement by Comey into a line that suggests the FBI declared that her public remarks on the email issues were truthful.
But Comey repeatedly refused to confirm that when pressed by lawmakers: “That’s a question I’m not qualified to answer. I can speak about what she said to the FBI.”
When asked specific questions about certain public statements made by Clinton, Comey did not endorse Clinton’s claims.


The Clinton campaign falsely claimed the founder of the Nevada company she visited yesterday was a Republican that was backing her.
CNN reports: Hillary Clinton's campaign claimed Thursday that the founder of a local electrical company she toured in Nevada was both a Republican and a Clinton supporter.
One problem: The businessman, Dennis Nelson, told CNN that he was not a Clinton supporter and that he didn't tell the campaign that he was a Republican.
"To tell you right now, as messed up as everything is, I don't think I could tell you who I am going to support until a week or two before the election," Nelson said. "There are so much lies on both sides out there that I don't know. I really honestly don't know who I will support."
Nelson added that he "never" told the campaign that he was a Republican and declined to tell CNN if he were a registered Republican.
Third party candidates are sapping voters from Hillary Clinton.
POLITICO reports: [T]he Libertarian Party's presidential ticket - comprised of former GOP Gov. Gary Johnson of New Mexico and former GOP Gov. Bill Weld of Massachusetts - appears to draw more from voters who might otherwise be aligned with Clinton, especially younger voters.
The same is true of Green Party nominee Jill Stein - though to a lesser degree, since Stein doesn't earn nearly the same level of support of Johnson.
Here's why Democrats should be concerned: Some soft voters may be moving into Clinton's camp when asked on a two-way ballot, but defecting to another candidate when given the option.
"Trump voters are mainly Trump voters, but Clinton voters are still not quite happy that they're going to end up voting for her," said Monmouth University pollster Patrick Murray, who has studied the role of third-party candidates in pre-election polls.


President Obama’s $400 million ransom payment to Iran will only embolden them to extract more money and concessions from the U.S.
The Wall Street Journal editorializes: President Obama often seems to reside in his own private Idaho on foreign affairs.
So it was no surprise that at his Pentagon press conference Thursday he forcefully denied that his Administration had paid $400 million in cash as ransom in January for the return of five Americans in Iran.
“We do not pay ransom for hostages,” he said. “We didn’t here, and we won’t in the future, precisely because if we did we’d start encouraging Americans to be targeted.”
He’s right that paying ransom for hostages encourages more hostage-taking, which is why U.S. policy has long opposed doing it.
And Mr. Obama, with his talent for imagining a world that he would like to exist, may even believe that Iran released the Americans for reasons other than the pallets of cash the U.S. delivered.
He said Thursday that the U.S. had disclosed the payments at the time, and that the foreign currencies were used to avoid violating U.S. sanctions law.
What matters to American credibility is what the mullahs of Iran believe.
And it’s obvious they believe that arresting and holding Americans in Iran is a useful way to extract money and other concessions from the United States.
Their latest demand is for the U.S. to hand over $2 billion in Iranian funds that have been frozen for the victims of Iranian-sponsored terrorism.
The thugs of the world don’t care what Mr. Obama believes.
They care only that he shows them the money—then they’ll release their hostages.


The U.S. trade deficit climbed again in June, fueled by a growing imbalance with China.
Marketwatch reports: he U.S. trade deficit jumped 8.7% in June to a 10-month high of $44.5 billion, reflecting the higher cost of oil and more imports of consumer goods such as cell phones and drugs.
Economists polled by MarketWatch had expected the trade gap to rise to $43.2 billion from a revised $41 billion in May.
The trade gap with China advanced to $29.8 billion and hit the highest level since last November. Higher purchases of electronic and other consumer goods were behind the increase.


ObamaCare’s markets will be less competitive next year as insurers stop offering coverage due to mounting losses.
Vox explains: Competition on the Obamacare marketplaces will decline next year.
There will be significantly more places in the country where customers have no choice of health insurance because just one company signed up to sell coverage.
This is the conclusion that health policy experts have increasingly gravitated toward in recent months and weeks, as major insurance companies have announced hundreds of millions of dollars in financial losses on the Obamacare marketplaces.
"Under any likely scenario, there will be less insurer participation in the exchanges in 2017 than there was in 2016," says Michael Adelberg, a senior director at FaegreBD Consulting who previously worked in the Obama administration helping to manage the marketplaces’ launch.
"It seems pretty clear at this point there will be less competition in the marketplaces next year, particularly in rural areas," says Larry Levitt, senior vice president for special initiatives at the Kaiser Family Foundation.
President Obama promised when the marketplaces launched that Americans will find "[m]ore choices, more competition, and in many cases, lower prices"
A recent analysis shows that Obamacare’s marketplaces will have twice as many exits as entrants in 2017.
Insurers have tested out Obamacare, and in some cases they’ve lost hundreds of millions of dollars.
This all leaves the law in somewhat of an uncertain situation, one in which it’s not clear how well Obamacare will deliver on the president’s promise of "more competition."


In Virginia, a Democrat mayor backing Hillary Clinton was arrested in a meth for sex scheme.
The Washington Post reports: The mayor of Fairfax City has been arrested and charged in connection with a what authorities say was a methamphetamine for sex scheme.
Fairfax City Mayor Richard “Scott” Silverthorne, 50, was caught in an undercover operation by police, authorities said.
The scheme involved offers of meth in exchange for group sexual encounters with men, police said.
In one exchange, police say Silverthorne provided meth to undercover detectives at the Crowne Plaza Hotel in Tysons Corner.
Silverthorne is also a substitute teacher for Fairfax County schools.
Posted by Frances Rice at 9:50 PM