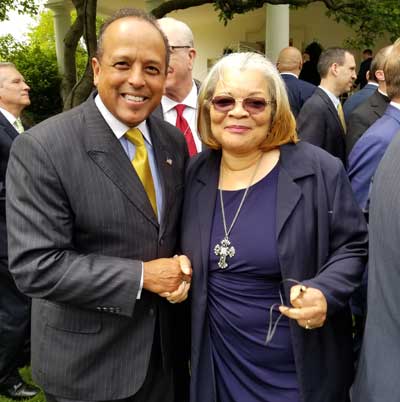 For too long, black America has let its political voice and power be taken for granted.

When Kanye West recently suggested that African-Americans didn’t need to be Democrats, Rep. Maxine Waters quickly tried to put him in his place.

Waters told Kanye, in effect, that he needs permission -- from his betters, presumably -- to say what he believes. In other words, don’t talk out of turn; follow the thinking of the group.

She sounded like a plantation manager of old, insisting that everyone else follow the rules she and other black Democratic leaders set down for “their” people.

Black America’s monolithic loyalty to the Democratic Party does not empower blacks, however.

If we are not “allowed” to entertain any political alternatives, we are left locked into a party that has not served our interests.

Call it a kind of collective Stockholm Syndrome: The condition that causes hostages to develop a psychological alliance with their captors.

Trillions of dollars have been poured into the inner cities, and yet these groupthinkers are blind to the seven-decade failure of the Democratic Party’s policies to improve the lives of black Americans.

When they are asked if it would not be better if single moms and dads could take their tax dollars and send their children to schools that are not ravished by gangs and drugs, the groupthinkers echo the narrative that black politicians and white liberals have taught them:

That school choice “starves” the failing public school system and harms their neighborhoods.

These groupthinkers don’t tell you that members of the Congressional Black Caucus and the children of white Democrats typically send their own children to private schools.

I have recently come under attack for chronicling this history of the Democratic Party on Fox News and elsewhere.

While I don’t advocate identity politics, I often remind African-Americans that even the late Malcolm X told the blacks of his day, “While you put the Democrats first, they put you last.”

He also called blacks political chumps and traitors to their own race for reflexively supporting the party.

All Americans today are reaping the benefits of the Trump administration’s economic policies.

Incomes have risen in real terms for the first time in 18 years, tax refunds next year that will be substantially larger, 2 million-plus poor Americans are no longer on food stamps.

This has been achieved by the GOP, which was founded in 1854 as the anti-slavery party.

What’s more, most states with Republican governors are outperforming so-called blue states — those run by Democrats. No matter what the color of your skin happens to be, economic opportunity comes from freedom, not higher taxes and big government.

Meanwhile, the economic fallout from group thinking can be seen in every major city in America, where the plantation supervisors are still channeling the failed oppressors’ spirit upon the minds of the weak.

It’s long past time that black America shake off the plantation manager’s yoke and shake off its Stockholm syndrome.

Groupthink has gotten this group nowhere.

Bishop Aubrey Shines is a pastor, author and evangelist.