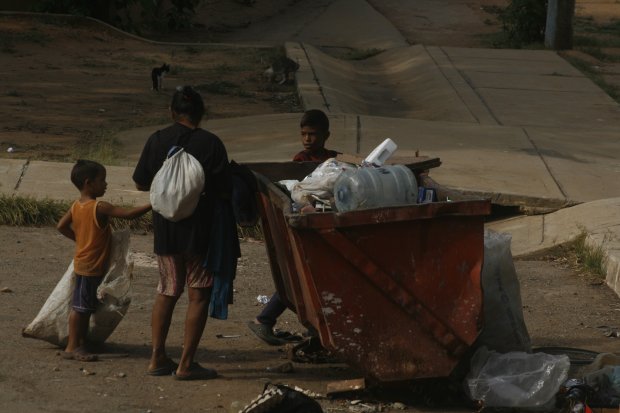 A mother and her two children looking for food in garbage containers in the municipality of San Francisco, Venezuela, June 7. Photo: Humberto Matheus/Zuma Press

Few countries have provided such a perfect example of socialist policies in practice.

Word from Caracas is that locals have taken to scouring city streets for plastic garbage bags full of rubbish and, when they find them, emptying the contents so that they can resell the bags.

This sounds absurd, but it is believable in a country where extreme poverty has spread like the plague. Human capital is fleeing. Oil production is plummeting, and the state-owned oil company is in default. The garbage bag, imported with dollars, is a thing of value.

If anything was more predictable than the mess created by Hugo Chávez’s Marxist Bolivarian Revolution, it is the pathetic effort by socialists to deny responsibility.

The Socialist Party of Great Britain tweeted recently that Venezuela’s problem is that socialism has yet to be tried. It blamed the crisis on “a profit-driven capitalist economy under leftist state-control.”

Even more preposterous is the claim by some academics that economic liberalism in the 1980s spawned the socialism that has destroyed the country.

Learning from history is impossible if the narrative is wrong. So let’s clear the record: By the time Chávez was elected, Venezuela already had 40 years of socialism under its belt and precious little, if any, experience with free markets.

When Venezuela promulgated its 1961 constitution, Betancourt immediately suspended Article 96, which read: “All can freely engage in the profitable activity of their choice, without any limitations other than those provided for in this Constitution and those established by law for security, health or other reasons of social interest.”

This crucial protection remained on the shelf for 30 years, as a string of socialist governments employed price and exchange controls in counterproductive attempts to raise living standards.

Rent control in Venezuela dates to 1939 but was not enforced by Pérez Jiménez. In August 1960 Betancourt revived it, passing a new rent-control law and prohibitions on eviction.

Since then, “not one apartment rental building has been built,” writes Vladimir Chelminski in his 2017 book, “Venezuelan Society Checkmated.”

The legendary slums that climb Caracas’s hillsides are a testament to this socialist stupidity.

Carlos Andrés Pérez took the presidency for the first time in 1974.

The national assembly granted CAP, as the president was popularly known, an “enabling law” so that he could rule by decree.

He mandated salary increases for the entire nation and implemented, for the first time, a minimum wage.

He froze prices and issued crazy edicts. All commercial buildings had to employ elevator operators, and all public restrooms had to have attendants.

CAP put limits on foreign investment in everything from telecom and banking to food and electricity distribution, forcing foreigners to sell what they owned in Venezuela.

He nationalized oil in 1976. The state expanded its role in iron, steel and aluminum and took control of coffee, cocoa and the previously independent central bank.

CAP and his successors ran up unsustainable debt. The bolivar had been fixed at between 4.3 and 4.5 to the dollar since the early 1960s. But by the late 1970s, with the central bank printing money, it was no longer worth that.

Buying dollars with bolivars became a lucrative national pastime until 1983, when President Luis Herrera Campins announced exchange controls. He also reinforced price controls, which by then applied to virtually everything, from cement, hotels and banking to parking lots, meat, milk and sugar.

When CAP returned to power in 1989, he inherited a fiscal and monetary time bomb.

Out of options, he liberated almost all prices, along with the exchange rate, opened the country to foreign investment, and lowered import tariffs.

He restored Article 96 of the constitution. According to Mr. Chelminski, a former executive director of the Caracas chamber of commerce, the positive effects included a notable recovery in foreign investment, exports and economic growth.

But Cuba had already infiltrated the military. Now it capitalized on the social unrest generated by the sudden reversal of policies, which exposed pent-up inflation. CAP also had credibility problems with investors. After two coup attempts in 1992 he was weakened and eventually removed for corruption.

Rafael Caldera took office for a second time in 1994 and restored price and exchange controls. By 1996, facing another collapse, he reversed course again, liberating prices and opening markets.

The adjustment exposed reality but was painful, especially in the face of falling oil prices.

Thus, the ground was fertile for an antiestablishment candidate in 1998.

Chávez was inaugurated in February 1999, in the midst of a recovery in oil prices and with the bolivar at 576 to the dollar. He tripled down on socialism, exacerbating a long history of destroying capital that would lead to today’s disaster.