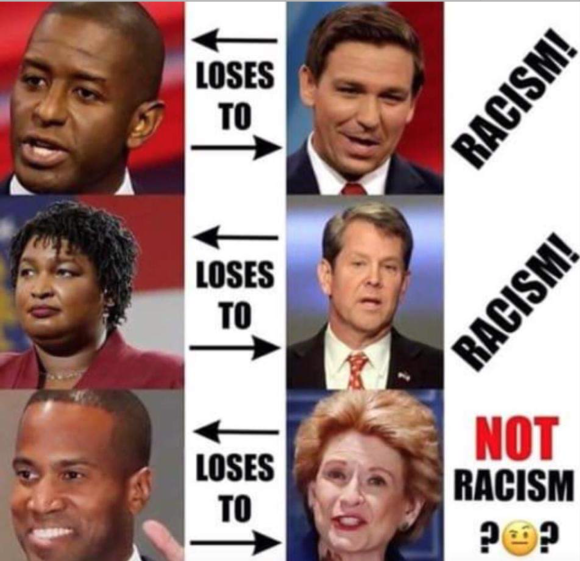 The sky is blue, the sun rises in the east & sets in the west, Hillary Clinton lost to Obama, Black Democrats lose to white Republicans because of racism and voter suppression, yada, yada, yada.

Just as sure as the above truisms are absolute, so can you count on liberals using the race card after every election that doesn’t go their way.

Every time a Black Democrat candidate loses to a White candidate, the liberal media, especially those who are Black, fall back to their default position:  racism and voter suppression!

One need to look no further than the Florida and Georgia governors’ races to see exhibit A & B.

They won their primaries, not because they were better candidates, but because they each faced a very crowded primary field; thus, the vote was split into very narrow constituencies where a small plurality of the vote handed them a giant victory.

But, in all honesty, Gillum and Abrams both ran incredibly impressive, well-organized general election campaigns.

They both lost, not because of racism and voter suppression; but because their Republican opponents, former Congressman Ron DeSantis of Florida and former Georgia secretary of state Brian Kemp, got more votes than them!

Liberals find it IMPOSSIBLE to admit to such a simple fact.

I call this the Hillary Principle, as in Hillary Clinton.

Like the liberal media trying to explain away electoral defeat of Democrats, she is incapable of admitting that her loss had everything to do with her candidacy; not extraneous factors like gender, sexism, media bias, etc.

In a similar manner, radical Black so-called journalists and liberal Black media pundits’ default position is RACISM and VOTER SUPPRESSION, with absolutely no evidence to prove their case; but a lie that is oft repeated becomes the truth.

Not one peep from radical Black journalists when Black Republican John James lost to White Democrat Debbie Stabenow in the 2018 election in Michigan for a US  Senate seat.

Who are some of these radical Black fake journalists?

They do more damage to the Black community than anyone with a white hood over their faces (that will be the subject of a future column).

They are incapable of giving Black folks analysis, but rather simply read from Democrat talking points that they are told to read.

In the spirit of full disclosure, I served as senior advisor to Congressman Ron DeSantis’ successful campaign for governor of Florida. I have known DeSantis since he came to Congress back in 2012.

He then authorized and empowered me to do what was necessary to get him the results he wanted. The last pre-election poll I saw showed us polling at 2% of the Black community.

According to CNN’s exit polls from election day, DeSantis actually received 14% of the Black vote!!!

That is why Gillum lost his bid to become Florida’s first elected Black governor; his loss had nothing to do with racism or voter suppression.

Enough Black voters in Florida didn’t agree with Gillum’s position of supporting amnesty for those illegally residing in Florida.

They rejected his call to increase taxes on small businesses by 40%.

They rejected his call for a single-payer health care system.

Listening to these radical Black quasi-journalists, you wouldn’t have known that the people of Florida rejected Gillum’s platform, NOT his race!

When radical journalist Roland Martin found out that I was working with Congressman DeSantis, he sent this email to me: “You are advising him? Oh, he’s guaranteed to lose now!!! LOL.” 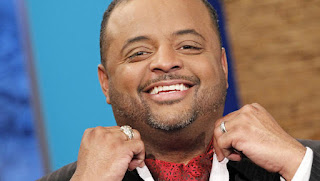 Yes, he and most liberals, think Blacks are too stupid to make a rational choice when it comes to how they vote.

14% of Blacks in Florida over-wrote their strong desire to make history by electing the first Black governor in Florida’s history.

They decided that a person’s policies were more important than one’s skin color.

I often tell Republicans that Blacks may not be able to help you win an election; but we sure in hell can help you lose one.

DeSantis deserved to win the governor’s race in Florida and should be held up as an example of what can be done when a candidate gets serious about the Black vote.

Yes, the final vote was much too close for my liking, less than 1% margin of victory, but a win is a win.