END OF THE MUELLER AFFAIR 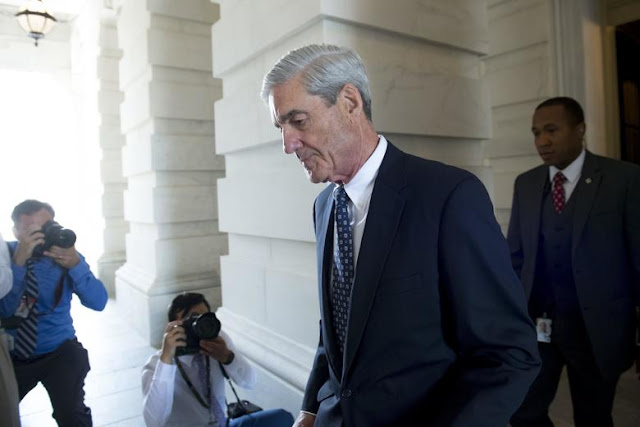 Robert Mueller is closing up shop. He has delivered his report to Attorney General Barr. No more indictments will be secured by his office: CNN hardest hit.

What have we learned? Paul comments cautiously here. I throw caution out the window to make these provisional observations and comments.

Mueller has secured the indictment of 34 individuals (and three companies). A few of the individuals would have rolled merrily along but for their association with the Trump 2016 presidential campaign or their service in the Trump administration. The lion’s share of those indicted are Russians who are alleged to have interfered illegally in the campaign from a metaphorical basement in Moscow and one Maria Butina, who did her thing as a Russian agent in the United States.

In toto, Mueller indicted 25 or 26 Russian nationals (and the three companies). Mueller’s indictments of the 13 Muscovites in the basement and 12 Russian GRU officers are of the show-business variety. They will not see the inside of an American courtroom. They will roll merrily along, period.

Michael Flynn’s case deserves a book, a serious one by an honest reporter among the few who remain uncompromised by their coverage of the Mueller investigation. Flynn’s prosecution appears to be a put-up job by remnants of the Obama administration in the Department of Justice, the FBI, and the intelligence community. Recall that he was investigated for the act of talking to the Russian ambassador during the transition after Trump’s election. The Logan Act served as the pretext. What’s law got to do with it?

Flynn’s investigation reeks of bad faith. From it we can derive the sorry lesson never to speak to the FBI if one is under investigation. If only he had declined the FBI’s invitation, he might have rolled merrily along.

I believe we have yet to see an unredacted copy of Mueller’s charter. Perhaps now that he is closing up shop we can see the whole thing.

Mueller’s original appointment by Rod Rosenstein — triggered by James Comey’s firing — indirectly specified the counterintelligence investigation by the FBI in which the Trump campaign had been caught up since mid-2016. The regulations nevertheless fail to authorize the appointment of Special Counsel under the circumstances.

Picking up on the observations of NR’s Andrew McCarthy, Rosenstein promulgated a formal written charter setting out the scope of his investigation even if it still failed to identify the possible crime(s) he was to investigate.

We have all operated on the assumption that the gravamen of Mueller’s investigation was alleged “collusion” by the Trump presidential campaign with Russians interfering with the election. See, e.g., the FISA warrant taken out on Carter Page. His reputation duly impaired, Carter Page still rolls merrily along. One inference we can draw from the Mueller investigation: Carter Page is the cleanest man in the United States. Perhaps now that the Mueller investigation is closing up shop we can see the whole FISA warrant.

The political corruption of the FBI and the intelligence agencies by the Obama administration was to remain a deep, dark secret. If the American people had not had the temerity to elect Donald Trump along with a Republican Congress in 2016, we would have remained in blissful ignorance. After such knowledge what forgiveness?

The corruption wrought appears to extend to the federal courts. The FISA warrant on Carter Page was renewed three times. Four federal judges — each one appointed to the FISA court by Chief Justice Roberts — signed off on it. They have yet to speak up, but I will say that at the least they were ill-used. Another lesson to be drawn is that the FISA regime needs to be reformed.

The Mueller report will undoubtedly speak to President Trump’s alleged “obstruction” of the FBI investigation. Trump fired James Comey, but the investigation too rolled merrily along. Indeed, it roiled the first two years of the Trump administration.

No indictment secured by Mueller speaks to “collusion.” There is a reason for this. “Collusion” was itself a fabrication of the Clinton presidential campaign courtesy of Glenn Simpson/Fusion GPS and its contractors. The Mueller investigation leaves human wreckage in its wake. Whatever the Mueller report says, it will leave the Clinton campaign untouched and unscathed.

The Mueller investigation takes its place as an extended episode of the biggest scandal in American political history. Now what?