By NEAL B. FREEMAN | National Review 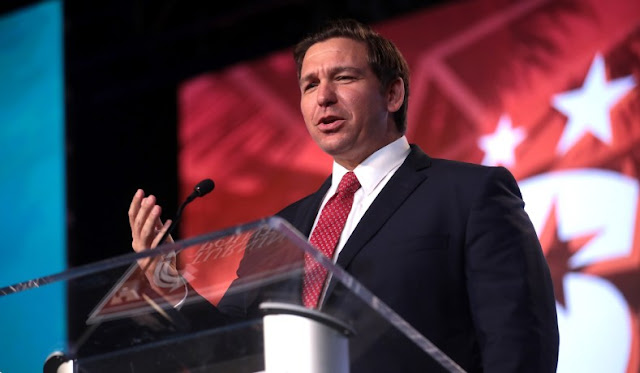 Governor DeSantis is making a good first impression on the voters.

There was once a day, or at least Louis Brandeis said there was, when the states were the laboratory of democracy. I cannot personally confirm that rumor. Over the course of my own life, the Federal government has been a 24-hour laboratory for mandates on the states, respectively, or on the people.

In the economic realm, as just one example, Washington confiscates much of our wealth and then tells us what to do with the rest. Washington has even larger appetites for the regulatory state, of course, which is now moving briskly beyond the boundaries of behavior control into the vast new frontier of thought control. For Washington, it’s onward, always onward, if not discernibly upward.

But if the states no longer serve as laboratories, they can still serve as breeding grounds for independent thought, which can give rise on occasion to enclaves of restive citizens aspiring atavistically to self-government. Accidents can happen.

One such accident occurred in Florida last November.

At the top of the ticket, the voters elected an accidental governor. A little-known congressman from north Florida, Ron DeSantis, ran, first, in the GOP primary against the prohibitive favorite, Adam Putnam, who not only had won statewide races before but had been reckoned by the party establishment to be “next in line.”

An attractive and gregarious politician, Putnam had served in Congress, as agricultural commissioner (a position of considerable statewide clout), and as the warm and approachable member of Governor Rick Scott’s cabinet. Putnam had the money, the ID, and support from the business community. A few months before the primary, he held a commanding lead in the polls.

With little to lose, DeSantis gave Trump the full bear-hug.

He went on Fox News, over and over, to defend Trump against the charge du jour — TV appearances with no more than tenuous connection to issues even proximately Floridian.

He featured Trump in almost every print piece, every TV spot. He accused Putnam of being less than ecstatic in his support for Trump (a serious charge in parts of the state), which Putnam, trying to keep his Jeb! supporters on side, clearly was.

In a late-August primary, Trump, er, DeSantis won the GOP nomination in a night filled with surprises.

On the Democratic side, the winner (who had been running third in late pre-primary polls) was Tallahassee mayor Andrew Gillum, a virtually unknown and ethically challenged student at the AOC School of Barstool Economics.

It was the consensus of the political press that Andrew Gillum became that night Florida’s least electable major-party candidate of the last half-century.

In a rare victory for media consensus, Gillum lost the general election and returned to his previous obscurity.

For Ron DeSantis, it was good to be the accidental governor.

Most of the special interests, including even the mighty sugar lobby, had professed allegiance to Putnam. DeSantis owes them nothing.

The voters had not bothered to extract commitments from what appeared to be an also-ran candidate. DeSantis thus has few campaign promises to redeem.

And the legislators — in Florida, a colorful and turf-conscious crew, many of whom had worked with Putnam for years — had cut no deals. They are now introducing themselves to an incumbent governor armed with the line-item veto.

DeSantis, a smart and self-confident 40-year-old, has thus arrived at the governor’s mansion with no baggage, only an overnight bag stuffed with fresh and mostly conservative ideas.

Governor DeSantis is making a good first impression on the voters. While he was elected by a whisker, his approval ratings have now shot up to 60 percent, far exceeding the numbers for senators Scott and Marco Rubio.

He and his photogenic young family seem to be everywhere in a state that is 447 miles long and 361 miles wide and spreads across two time zones.

We may be witnessing, in fact, the birth of a new political paradigm, as DeSantis seems to be launching his campaign just after he has been sworn in.

DeSantis is moving even more rapidly on the policy side.

He has replaced three liberal justices on the Supreme Court with three conservatives and in doing so has consolidated a friendly majority.

He has built on Scott’s yeoman work with Puerto Rican immigrants in central Florida by managing the Venezuelan issue with great skill among Hispanic groups in south Florida.

He has persuaded legislative grandees to think big on school choice. (At least the first two DeSantis budgets, I am reliably informed, will reflect that priority.)

He will also give the aging economic boom here a boost with a tax cut.

And he won’t be accused of pandering to his base.

One of his first executive actions was to support the use of smokable medical marijuana, which has proved to be broadly popular across party lines.

Another was to go all in on a Teddy Roosevelt–style environmental cleanup in areas ravaged, it has long been alleged, by the sugar barons, who for the first time in decades do not have an indebted friend in the governor’s mansion.

I have just returned from two days in Tallahassee. On the long drive home, I found myself turning over the kind of question that engages the political junkie.

Affix all of the obligatory qualifiers, if you like, but answer me this: As of this moment, who is more likely to be the Republican nominee in 2024 than the accidental governor of Florida?

Neal B. Freeman is a former editor and columnist for National Review and the founding producer of Firing Line.

https://www.nationalreview.com/2019/03/its-morning-in-tallahassee/
Posted by Frances Rice at 9:57 AM