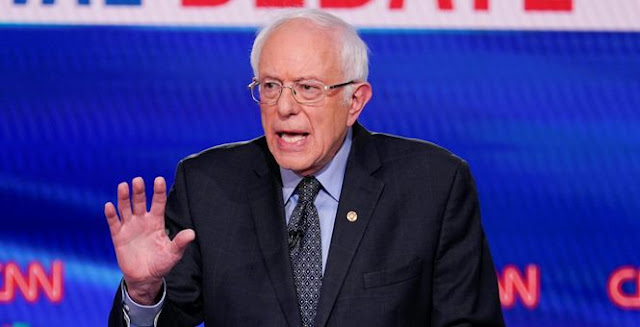 Anyone else experiencing déjà vu? Sen. Bernie Sanders (D-VT) has dropped out of the 2020 presidential election. He will, however, remain on the ballot in the remaining races and collect as many delegates as he can.

"I wish I could give you better news," Sanders said from his home in Burlington, VT on Wednesday. But considering he's now behind former Vice President Joe Biden by 300 delegates, he admits "the path to victory is virtually impossible."

We've seen this story play out before. In 2016, the progressive Sanders gave the establishment Hillary Clinton a run for her money, but the Democratic Party had already paved a clear path for the more recognizable and more electable former secretary of state. A sizable number of his supporters were still bitter about it in 2020.

"I don’t trust the Democrats," one Bernie supporter in New Hampshire said. "I think they’re two sides of the same coin. Although they don’t want Trump to win, they would rather have him than Bernie I think. And they’re probably going to screw him."

Sanders had promoted some radical proposals throughout his campaign such as the socialist Medicare for All plan, while Biden has suggested Democrats take a more moderate (in comparison) approach by building on Obamacare.

Democrats' hopes now rest on former Vice President Joe Biden, who has done little more than provide gaffe-heavy interviews these past few weeks. He had a disastrous start to the 2020 primary, having lost in both the Iowa Caucus and New Hampshire primary. Sensing that Sanders was heading toward the nomination, Democrats rallied around Biden and in a matter of days held his coronation. It happened almost overnight.

Sanders thanked his campaign staff and his supporters for helping him in his quest for "economic and racial justice." He claimed that the current coronavirus pandemic reveals how "absurd" the current employer-based private health insurance system is.

"Few would deny that over the course of the past five years, our movement has won the ideological struggle," he added.

Well, some would deny it.

When Sen. Sanders dropped out of the race in 2016, he endorsed and campaigned for Clinton. On Wednesday he said he'd work with Biden to defeat "the most dangerous president in our lifetime."

A parting message from the president.

“With Bernie Sanders suspending his campaign, it’s all but official that the Democrat establishment got the candidate they wanted in Joe Biden, as well as the candidate President Trump will destroy in November," Trump 2020 campaign manager Brad Parscale said in a statement on Wednesday.

"President Trump is still disrupting Washington, DC, while Biden represents the old, tired way and continuing to coddle the communist regime in China. Democrat elites shoved Bernie Sanders to the side for a second time, leaving many of his supporters looking for a new home.”