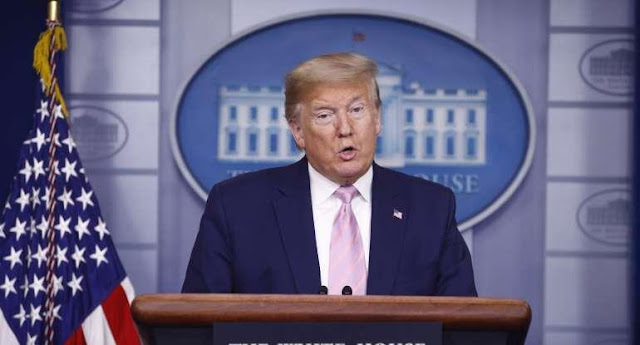 Well, It's a Start

President Trump turned Monday night on its head, teasing a promise that a good many of us have been hoping for in some form or another. After listening to idiot Democrats and their flying monkeys in the media repeatedly say that he wasn’t or isn’t taking the coronavirus threat seriously enough, the president used the threat of the crisis to make a big move on immigration.

The president tweeted that he would be issuing an executive order “temporarily suspending immigration into the United States.”

There had been no mention of anything of the sort during the president’s daily coronavirus briefing earlier on Monday, which made his tweet all the more melodramatic.

It’s going to be fun watching the media pivot or swirl now that Trump has thrown them this curveball. This is another one of those times where those of us who enjoy watching the president play the media think he might be playing some sort of five-dimensional chess with them.

We’ll probably see a lot more like this response from Politico:

The announcement stood in contrast to Trump's recent messages of cautious optimism about the country soon reemerging from weeks of lockdowns designed to contain the virus. The president has repeatedly tried to downplay the severity of the outbreak since its arrival in the country, and his push to reopen the economy has put him at odds with some of the nation‘s governors and, at times, his top health experts.

It is almost impossible to overstate just how awful the media has been these past few weeks. I probably shouldn’t be surprised anymore. Since November of 2016, every time I think the media has reached its professional nadir, a “hold our beer moment” quickly ensues. There is virtually nothing that President Trump can do during this crisis that will allow them to offer him any praise. He could start curing people himself and members of the press corps would complain that he was taking attention away from medical professionals.

Everyone in the media seems to be struggling with the very common notion of “cautious optimism,” which is what the president is preaching. There are places in the country that are going to be able to re-open and go back to work before others, there’s no call for blanket gloom and doom. Of course, the longer we’re miserable, the more likely that drooling moron Joe Biden has a chance of getting elected president, so it’s easy to figure out why they’re rooting for that.
Cautious optimism is balance. Balance is calm. Calm is good in difficult times.

I’d love us all to get back to work as quickly as possible.

Still, I wouldn’t mind if this executive order lingers awhile.