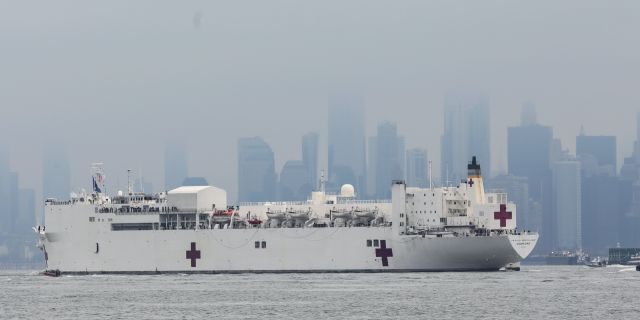 The Navy hospital ship USNS Comfort arrives in New York City to help provide relief  for the coronavirus outbreak that is impacting the area's hospitals. (AP)

The USNS Comfort arrived Monday at the front lines of the coronavirus outbreak in the United States, bringing a message to all New Yorkers that the Navy is "with you" and "remains committed in this fight," Rear Adm. John Mustin said.

The Navy hospital ship, which contains 1,000 beds, a dozen operating rooms, a medical laboratory, a pharmacy and more, sailed into New York City harbor for the first time since the September 11, 2001, terrorist attacks.

It is staffed by a crew of 1,200 and will "serve as a referral hospital for non-COVID-19 patients currently admitted to shore-based hospitals," freeing up space in those facilities for local medical professionals to tackle the growing pandemic.

"Today, like then, we bring a message to all New Yorkers -- now your Navy has returned and we are with you, committed in this fight," Mustin said, adding that "words are incapable of expressing the depth of my gratitude for those on this mission and for the families they leave behind."

But "not all of our nation's heroes wear military uniforms," he noted.

"Especially today, we acknowledge that many wear scrubs. Let us not forget – nor fail to recognize – that the doctors and nurses across America, those who are treating patients in these unprecedented times, they are all heroes," Mustin said after the Comfort docked at Manhattan's Pier 90.

"And like those heroes, the unmistakable white hull and red cross of this great ship have been a welcome sight around the world, standing at the forefront of our humanitarian missions overseas. This ship represents all that is good about the American people. All that is generous, all that is ready, responsive and resolute.”

Thomas Modly, acting secretary of the U.S. Navy, speaks out on efforts to help hospitals during the coronavirus outbreak.

New York City Mayor Bill de Blasio said Monday the ship's arrival means his city is "going to be able to do the life-saving work right now,” as “750 beds will be put into play immediately to relieve the pressure on our hospital system.”

“If there is ever a time that we need to work together it is today," New York Gov. Andrew Cuomo added. "The president is right – this is a war. And what does this nation do when it’s at war? It comes together and it acts as one.”

On the West Coast, President Trump has deployed the Comfort's sister ship -- the USNS Mercy -- to Los Angeles, where it is now serving a similar mission.

The ships were built in the 1970s and originally deployed as oil tankers before being converted to hospital ships in the 1980s and delivered to the Navy.

Cuomo said Monday that moving a ship like the Comfort to New York City is a "major enterprise."

"I’ve said to them all ‘prepare soon, prepare early, get your preparations in place and don’t think that any American is immune from this virus," he added.

Mustin ultimately believes New York City will overcome the coronavirus, like many of the crises it has faced throughout history.

"As a resident New Yorker myself I can attest to the invincible spirit of New York," he said. "From the ships that she built in World War II to her unflappable determination following 9/11 and Hurricane Sandy, I have great confidence that New York will weather today’s storm as well.”