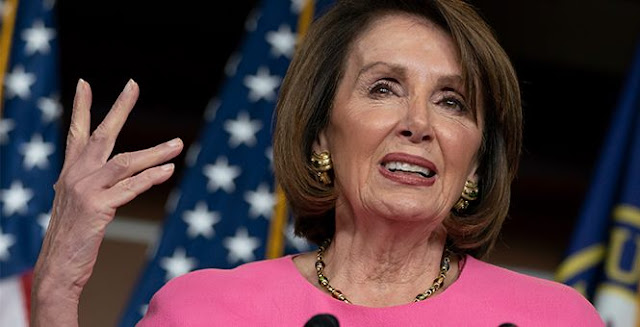 We laid out the state of play in yesterday's post, and life has only gotten tougher for Democratic leaders since.  Pressure is finally starting to mount from not just Congressional Republicans, but also some reporters, and even a number of rank-and-file Democrats breaking ranks.

The Schumer/Pelosi position is completely untenable, and is now playing out in an actively destructive way for many small businesses in dire need of federal assistance during this forced shutdown.  The Paycheck Protection Program (PPP) funds from the bipartisan Coronavirus rescue bill have helped roughly 1.6 million small businesses keep millions of workers on the payroll during this crisis. It's been a very popular and effective program.  And it ran out of money earlier this week.

Republicans are responsibly requesting a standalone replenishment of this pot of money, which is understood by virtually sentient observer as urgently needed, right now.  At least 22 million Americans have been laid off within the last month, due to the pandemic.

Democratic leaders look at all of this and are choosing to play games, attempting to shoehorn other spending into this simple, clean, immediately-required action.  When pressed on this harmful gambit by a journalist, Nancy Pelosi offered a messy, barely-coherent response.

Nancy Pelosi struggles, near speechless when asked to “explain to those small businesses” why she is blocking more funding for the #PaycheckProtectionProgram

If you listen carefully to her inarticulate, 'mumble, mumble Mitch McConnell' jumble, she's trying to make a point: She argues that McConnell believes that increasing funding for other portions of the relief plan -- reasonable and righteous as some of them may be -- is premature.  Congress should plus-up small business PPP right now, then determine which other elements actually need more money during 'phase four' of legislation.

Democrats, she says, want to include those plus-ups right now.  This would be a stronger argument if reality were different, but it's not.  McConnell has it right.  The reality is that the PPP money is dry.  It's gone.  Small business employers and banks seeking to participate in the forgivable loans program are currently receiving this message.

By contrast, large pots of the federal earmarked money for other purposes -- from individual checks, to hospitals, to state and local government assistance -- is still in the process of being paid out.  In many cases, we don't have good enough information about what is being spent effectively and efficiently, and what is not.  'Phase four' is coming.

But demanding new spending that may not be urgently needed as a condition for this simple PPP action is not responsible.  "Money is still in the pipeline for hospitals and states," a senior GOP aide tells Townhall.  "They're not exhausted of funds yet."  That's the crucial and inescapable difference here.  Pelosi and Schumer's case is so weak that their own members are peeling off.
We need to do whatever we can to plus-up the PPP program, to help Main Street businesses and to help those who have been handed an economic hardship through no fault of their own. Arguably this program should have had more money to begin with.

The SBA program, established as part of the $2.3 trillion COVID-19 aid package to help battered small businesses, ran out of cash to make new loans on Thursday morning, barely two weeks after it began taking applications.

“Congress has to act as soon as possible,” Mills told CQ Roll Call in an interview Thursday, adding that she’s spoken recently with Democratic senators and Speaker Nancy Pelosi’s office. “What I’m saying is: Number one, get the money replenished.”

The Schumer/Pelosi strategy is plainly unsustainable. The only question is how many small businesses and workers they're willing to crush in the process of winning microscopic or non-existent "concessions."

Perhaps they're counting on the press to shade or hide the truth -- and certain hacks will always carry water for lefty narratives, regardless of the facts.

Small businesses getting screwed in a way that big banks never will.

This is a direct indictment of...Democrats, who are the ones doing the 'screwing' here.

With all of this as a backdrop, here's an unfathomably moronic hot take from Pelosi, who is proactively sabotaging the US economy while blaming Trump for the negative economic consequences of a nationwide shutdown precipitated by...a global pandemic that originated in China and was covered up by the Communist Chinese government: Pelosi recently accused POTUS of "fiddling" while Americans die & suffer.