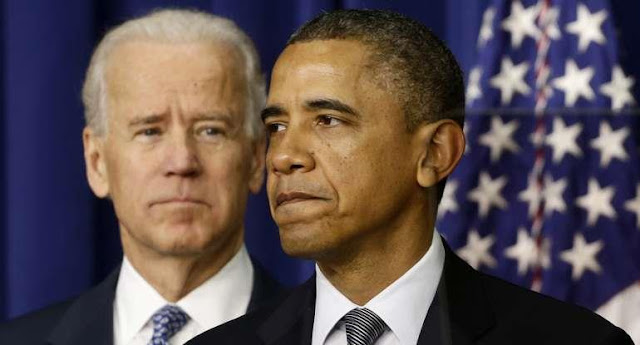 On Tuesday, former President Barack Obama ripped into President Donald Trump's decision to loosen environmental standards, comparing "climate denial" to the original skepticism officials expressed at reports of the coronavirus pandemic. Yes, in the midst of a pandemic that is choking the economic life out of this country, Obama focused on climate change.

Obama shared an article from The Los Angeles Times entitled, "Trump rolls back biggest U.S. effort to combat climate change." The article details Trump's move to loosen fuel efficiency standards as the oil and gas industry struggles with extremely low prices amid an oil price war between Russia and Saudi Arabia. This oil war has hit companies particularly hard during the coronavirus crisis. Obama instituted the higher standards in 2012 and he likely sees this move as a blow to his legacy.

Yet rather than just complaining about Trump undermining his legacy, Obama used the tensions of the coronavirus crisis to spread fears about climate change.

"We've seen all too terribly the consequences of those who denied warnings of a pandemic," the former president began. "We can't afford any more consequences of climate denial. All of us, especially young people, have to demand better of our government at every level and vote this fall."

In other words, Trump is facing another coronavirus (climate change) and his "denial" of the "science" will cost lives amid a hypothetical future disaster similar to the pandemic. Oh, and while I'm attacking Trump — don't forget to vote in November! *wink wink, nod nod.*

As Americans hunker down in the coronavirus crisis, scared for their lives and livelihoods, Obama condemns one of the Trump administration's moves to help America's struggling economy by comparing it to the early skepticism — voiced by Democrats like New York Mayor Bill de Blasio as well as Trump — about the coronavirus pandemic.

Obama insinuated that skepticism about the pandemic — which did not prevent Trump from taking early decisive action against the coronavirus — was the equivalent of skepticism about the dire predictions of climate alarmists. His tweet inflamed fears that climate change will be just as deadly as the virus.

This scaremongering comparison may achieve the opposite of Obama's goals, however. Some early models predicting the spread of coronavirus have recently been revised down, as evidence emerges that the spread — while horrific — is not as dire as previously modeled. A recent study in Britain had originally predicted that 500,000 people would die from the virus, but the numbers were revised down to predict that 20,000 would die in Britain.

White House coronavirus task force coordinator Dr. Deborah Birx warned against alarmist models in a press conference last week. She said government data does not suggest that 20 percent of the U.S. population would be infected with COVID-19, contradicting dire predictions.

"There’s no … reality on the ground where we can see that 60 to 70 percent of Americans are going to get infected in the next eight to 12 weeks," she insisted. She added that 19 of the 50 states are showing a persistently low level of cases despite reporting early infections. Those states each have fewer than 200 cases and are still working to contain the virus. "That’s almost 40 percent of the country with extraordinarily low numbers and they are testing," Birx said.

Even the flawed early coronavirus models are far more reliable than any climate change model. While there remains much to learn about the coronavirus, experts understand it to act in a way similar to influenza. The global climate, however, deals with hundreds of variables. While it is possible that carbon emissions may impact the global climate, it is nearly impossible to measure any such impacts on a global scale and prove that they are the direct result of carbon emissions.

Dire climate change predictions have proven false time and time again. A 2004 DoD report predicted nuclear war by 2020 due to climate change. That didn't exactly work out. In 2018, the tiny Maldives Islands were scheduled to sink beneath the waves due to climate change — yet the islands have actually grown in recent years! Climate alarmists have a record of failure going back more than 50 years. Yet people like Obama continue to insist that those who are skeptical about radical plans to upend the economy in order to avoid some hypothetical catastrophe are "deniers."

Trump's move to lessen restrictions and help oil companies amid this crisis is far from a "denial" of "science," and it is nothing like Obama's insinuation that Trump did not act fast enough to combat the spread of coronavirus.