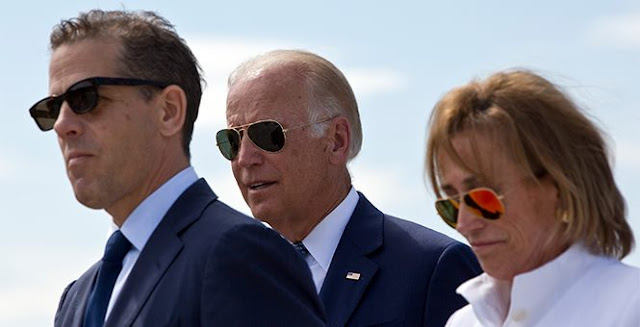 The Trump campaign released an online ad Thursday that portrays Joe Biden as being soft on China, hitting the former vice president for protecting “China’s feelings.”

“During America’s crisis, Biden protected China’s feelings,” the ad states, showing a montage of Biden with President Xi Jinping and news reports about how he was against President Trump’s coronavirus travel restrictions.

“Or perhaps China’s investment?” then flashes across the screen along with news segments about Hunter Biden’s dealings with China. A line is also used from a Peter Schweizer and Jacob McLeod story in the New York Post about how “Joe Biden met with Hunter’s Chinese partners,” during a 2013 trip to Beijing.

Despite his relative lack of private equity experience, Hunter landed a prominent role with the new company. Under the terms of the original deal, Rosemont Seneca, Hunter’s firm, shared a 30% stake in BHR with the Thornton Group, which was run by James Bulger, the son of longtime Massachusetts state Senate President Billy Bulger. Hunter and Bulger joined the board, along with Devon Archer, Hunter’s longtime business partner.

Archer would also serve as vice chairman of the fund’s investment committee.
The value of these partnerships to BHR is clear. Its own website boasts: “BHR, with its unique mixed ownership, combines the resources and platforms of China’s largest financial institutions … and the networks and know-how of our U.S.-based investment fund and advisory firm shareholders.”

Hunter Biden claimed to the New Yorker that he and his partners have not seen any money from the BHR deal. But even if true, the potential payouts are significant. (New York Post)

The ad then shows Biden standing up for China even as the country “cripples America” amid the coronavirus pandemic.

“It’s in our self interest that China continue to prosper,” Biden says in one clip from a 2011 event when he spoke at Sichuan University in Chengdu, China.

The last portion of the ad highlights praise for President Trump’s decision to put in place travel restrictions early on in the pandemic, which Biden had called “hysterical xenophobia” and “fearmongering.”

But then it appears Biden had forgotten about these criticisms of Trump, ending with Biden telling supporters, "I'm not going nuts."

Liberal media outlets are focusing on one part of the ad where Biden appears on stage with former Gov. Gary Locke of Washington, an Asian-American, claiming the ad falsely suggests he is Chinese.

But the Trump campaign defended the clip because it was from the vice president’s 2013 trip to the country with Hunter.

Conservatives praised the ad, saying Biden is "going to get crushed."