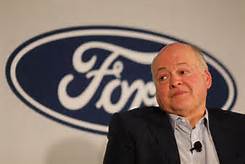 Ford CEO Jim Hackett had the perfect response after a group of virtue-signaling employees called on the major auto manufacturer to stop making police vehicles, which they say "perpetuate racism in society" and are "accessories to police brutality and oppression."

What are the details?

According to auto news site Jalopnik, a contingent of black and white employees at Ford Motor Company recently penned a letter airing their grievances over the company's relationship with numerous police departments in America — about two-thirds of police vehicles in the country are Fords.

In the letter, the employees argued that Ford, by building vehicles used by police, is actively sustaining racism and oppression in America. As a way to address this, they urged executives to discontinue all production of police vehicles.

Here's a portion of the letter:

On June 1st, you communicated to the company your commitment to "lead from the front and fully commit to creating the fair, just and inclusive culture that our employees deserve." We thank you for your leadership on this initiative. We also appreciate and fully support your statement against "superficial actions," and we write to push for real action by Ford Motor Company to address our role in the structures that perpetuate racism in society.
On May 25th, 2020 George Floyd was murdered by Minneapolis Police, alongside a Ford Police Interceptor. Days later, police officers drove Ford Police Interceptors into crowds of protesters in New York City and Los Angeles. During these past weeks, our vehicles have been used to deploy chemical weapons banned by the Geneva Convention.
Throughout our history, the vehicles that Ford employees design and build have been used as accessories to police brutality and oppression. We know that while many join, support, or supply law enforcement with good intentions, these racist policing practices that plague our society are historic and systemic—a history and system perpetuated by Ford for over 70 years—ever since Ford introduced the first-ever police package in 1950. As an undeniable part of that history and system, we are long overdue to "think and act differently" on our role in racism.

The letter was reportedly being circulated around Ford's headquarters in Dearborn, Mich., and employees were being asked to digitally sign on.

How did the CEO respond?

Inevitably, Hackett caught wind of the letter, or at least its sentiment, and addressed the issue in an office memo.

In the memo, he kindly but forcefully clapped back at the demands with logic and common sense.

Here's an example: "The issues plaguing police credibility have nothing to do with the vehicles they're driving." One would think such a notion would be obvious, but evidently it needed to be explained.

More from the memo:

As we imagine the future power of our connected vehicles, smarter Ford vehicles can be used to not only improve officers' ability to protect and serve, but also provide data that can make police safer and more accountable. Just think, dating back to the Model T, Ford has more than 100 years in serving first responders and that leadership over the decades has been earned by co-developing our purpose-built vehicles and technologies with police and emergency agencies to make our vehicles the number one choice.
By taking away our Police Interceptors, we would be doing harm to their safety and making it harder for them to do their job. Again, this is why, given our insights, new capabilities and leadership, I believe these unfortunate circumstances present Ford with an even greater opportunity to not only innovate new solutions but also leverage our unique position to support the dialogue and reform needed to create safer communities for all.

PJ Media provided a shortened translation of the memo: "No. We're not going to stop making police cars. Now get back to work."

Calls to "defund the police" and course-correct on racial injustice have swept the nation recently in response to the killing of George Floyd, a black man, under the knee of a white Minneapolis police officer.

Several American organizations or businesses have faced pressure to withdraw support for police or rebrand products deemed offensive. Ford is only the latest to face demands from the "cancel culture" mob, but it appears company leaders are not giving in.