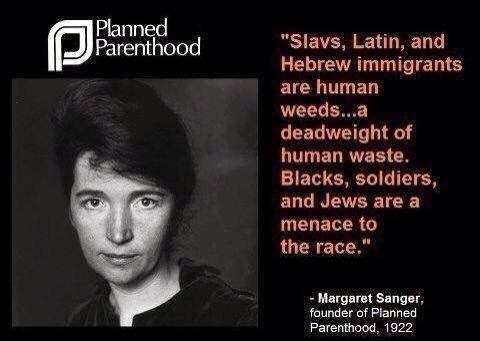 Fun news today that Planned Parenthood in New York has decided to remove the name of its founder, Margaret Sanger, from its local headquarters building because they’ve figured out that she was a deeply racist supporter of eugenics. The New York Times reports:

Planned Parenthood of Greater New York will remove the name of Margaret Sanger, a founder of the national organization, from its Manhattan health clinic because of her “harmful connections to the eugenics movement,” the group said on Tuesday. . .

But her legacy also includes supporting eugenics, a discredited belief in improving the human race through selective breeding, often targeted at poor people, those with disabilities, immigrants and people of color.

“The removal of Margaret Sanger’s name from our building is both a necessary and overdue step to reckon with our legacy and acknowledge Planned Parenthood’s contributions to historical reproductive harm within communities of color,” Karen Seltzer, the chair of the New York affiliate’s board, said in a statement.

My favorite sentence of the story is this: “Ms. Sanger still has defenders who say the decision to repudiate her lacks historical nuance.”

No word on whether Planned Parenthood will stop targeting minorities for abortions, which is in full keeping with Sanger’s old views.

Meanwhile, the Sierra Club is having a complete meltdown as it reckons with its own elitist past. Executive director Michael Brune has posted a long, angst-filled confessional today on the Club’s website, decrying the Club’s legendary founder, John Muir:

The Sierra Club is a 128-year-old organization with a complex history, some of which has caused significant and immeasurable harm. As defenders of Black life pull down Confederate monuments across the country, we must also take this moment to reexamine our past and our substantial role in perpetuating white supremacy.

It’s time to take down some of our own monuments, starting with some truth-telling about the Sierra Club’s early history. That will be followed by posts on how we’ve had to evolve on issues of immigration and population control, environmental justice, and Indigenous sovereignty. . .

The most monumental figure in the Sierra Club’s past is John Muir. Beloved by many of our members, his writings taught generations of people to see the sacredness of nature. But Muir maintained friendships with people like Henry Fairfield Osborn, who worked for both the conservation of nature and the conservation of the white race. Head of the New York Zoological Society and the board of trustees of the American Museum of Natural History, Osborn also helped found the American Eugenics Society in the years after Muir’s death.

And Muir was not immune to the racism peddled by many in the early conservation movement. He made derogatory comments about Black people and Indigenous peoples that drew on deeply harmful racist stereotypes, though his views evolved later in his life. As the most iconic figure in Sierra Club history, Muir’s words and actions carry an especially heavy weight. They continue to hurt and alienate Indigenous people and people of color who come into contact with the Sierra Club.

There’s much more at the link, but what is to be done at the end of this self-flagellation? Pay tribute, of course:

Pending approval from our board, we will shift $5 million from our budget over the next year — and more in the years to come — to make long-overdue investments in our staff of color and our environmental and racial justice work. . . We will also spend the next year studying our history and determining which of our monuments need to be renamed or pulled down entirely.

Take no chances: pull them all down. Replace them with the Great Pumpkin or something.

Hard to believe there isn’t an acute popcorn shortage these days.