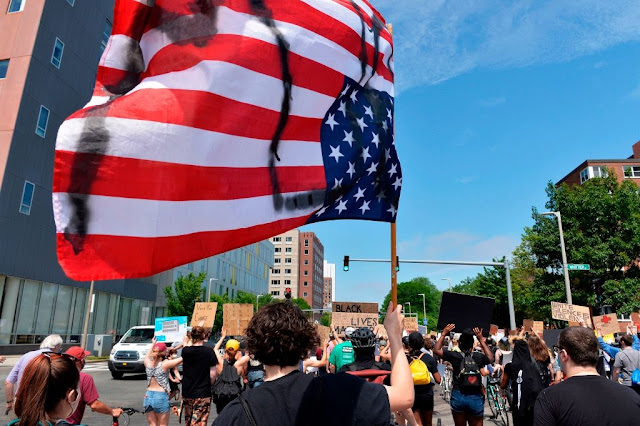 Pictured: A man carries and upside-down US flag with "BLM" written on it, at a protest march in Boston, Massachusetts on June 22, 2020.
(Photo by Joseph Prezioso/AFP via Getty Images)

The sinister agenda of the “Black Lives Matter” Movement to destroy the traditional nuclear family is exposed in the article with the title Black Lives Matter: "We Are Trained Marxists" - Part I.

Click on this video to see a chilling account of the damage BLM's agenda has done already to black children.


Below are key paragraphs from the article mentioned above:

In its policy agenda, Black Lives Matter states that it is committed to abolishing the traditional nuclear family:

"We disrupt the Western-prescribed nuclear family structure requirement by supporting each other as extended families and 'villages' that collectively care for one another, especially our children, to the degree that mothers, parents, and children are comfortable."

Karl Marx and Friedrich Engels rejected the traditional family because, according to them, the nuclear family, as an economic unit, sustains the capitalist system. Engels wrote: "The care and education of the children becomes a public affair; society looks after all children alike, whether they are legitimate or not."

Many experts have noted that African Americans need stronger, not weaker, families. In March 1965, Daniel Patrick Moynihan, then an Assistant Secretary of Labor under U.S. President Lyndon B. Johnson, wrote a groundbreaking report, which focused on the roots of black poverty in the United States. The report linked the many problems plaguing African Americans — crime, joblessness, school failure, out-of-wedlock births — to the breakdown of the traditional nuclear family.

Twenty years after the Moynihan Report, Glenn Loury, the first black economist to earn tenure at Harvard University, lauded Moynihan as a prophet:

"The bottom stratum of the black community has compelling problems which can no longer be blamed solely on white racism, and which force us to confront fundamental failures in black society. The societal disorganization among poor blacks, the lagging academic performance of black students, the disturbingly high rate of black-on-black crime, and the alarming increase in early unwed pregnancies among blacks now loom as the primary obstacles to black progress."

Thomas Sowell, an African American economist and social theorist opined that the Moynihan Report of 1965 "may have been the last honest government report on race." By contrast, African American civil rights activists criticized Moynihan for "blaming the victim."

CLICK HERE TO VIEW THE REST OF THIS ARTICLE.
Posted by Frances Rice at 4:15 PM