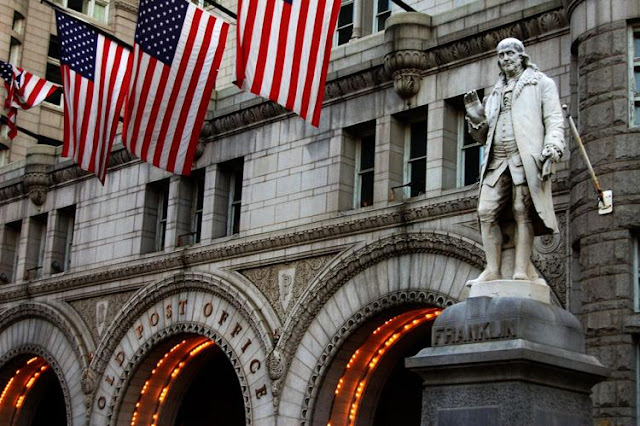 A statue of Benjamin Franklin stands outside of the Old Post Office Building in Washington, D.C. - Daniel M. Silva / Shutterstock.com 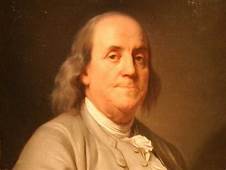 “This Treaty between America and France brings us lasting friendship and shows our support for each nation’s independence against attempts by the British to challenge our library.”
– Ben Franklin

The British-American colonies experienced tremendous growth during the eighteenth century as European immigrants flocked to the shores of America. The British looked down upon the colonies as a refuge for misfits and castoffs, whose only purpose was to provide raw materials and pay taxes to the homeland. The fly in the ointment for the British was that they expected this motley crew of rejects to kick back and accept their socio-political and economic exploitation without fighting back.

But each time they burdened the colonies with new mandates and taxes, they met opposition. The British never thought this melting pot, which included many enlightenment thinkers, would soon tell them to leave – or else! Due to this political and cultural gap between England and the colonies, it wasn’t if the colonies would revolt, it was when. The colonies were better prepared for insurrection than the British anticipated. They had plans in place for independence long before the revolution.

Our founders had prepared for the revolution years before the first muskets or cannons were fired. Thomas Paine stirred up the colonies with his pamphlets and speeches. Patrick Henry encouraged them to revolt. Samuel Adams planned our first attack. John Adams and Thomas Jefferson wrote the Declaration of Independence. James Madison, George Washington, Alexander Hamilton, and a host of others played strategic roles. But the wisest founder, Ben Franklin, assured them victory.

Franklin’s role in our founding has been eclipsed by his numerous talents, tremendous wisdom and his countless attainments. He was a doctor, a writer, printer, a philosopher, politician, inventor, postmaster, humorist, scientist, civic activist, a teacher, a statesman, diplomat and more. He was also our wisest founder who helped mediate the Declaration of Independence and the Constitution. Above all he formed strategic foreign alliances the colonies needed to start and win the Revolution. 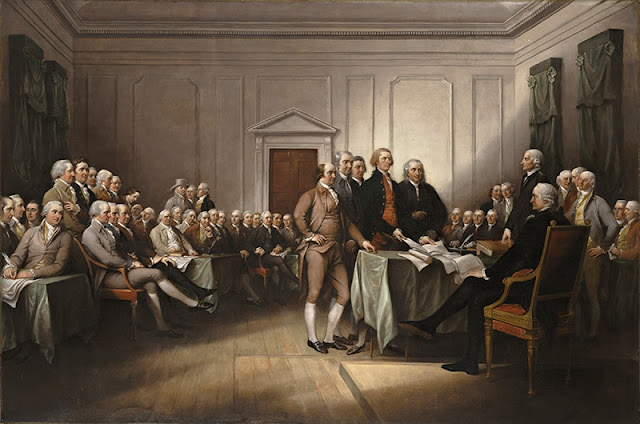 Our founders knew they could not fight the British on their own. Ben Franklin volunteered to seek out nations willing to form alliances against the Crown. He knew the Dutch and British fleets were battling for trading turf so he negotiated a treaty with the Dutch to remain neutral. So this enabled them to sell us arms and gunpowder they could ship to neutral St. Eustatius Island. This benefited both the Dutch and the colonies.

“By failing to prepare, you are preparing to fail.”
– Ben Franklin

On April 19, 1775, when the British were defeated at Lexington and Concord, the British rearmed and seized New York. As the Revolution moved forward, the strength of the British army became obvious. The colonies knew they needed help. Knowing the British and the French were at odds, Franklin and John Adams drafted a treaty between the two nations and Franklin set sail for France.

When the British were defeated at Saratoga, the French eagerly entered the war to help their American friends gain independence. Fourteen decades later, America was about to return the favor. By 1917 during World War I, every French family had been touched by the injury and loss of loved ones. The war was entering its fourth year with no end in sight. On July 3, 1917, members of the U.S. 2nd Battalion arrived in Paris. These Americans were an instant symbol of deliverance for the people who had waited for hours to greet them at the Gare d’Austerlitz. French nurses fed them lunch and tended to the ill. They were then escorted to their barracks for a much-needed rest and dinner, which included their best champagne.

Members of the U.S. battalion knew the next day was the 4th of July but didn’t give it much thought. The French were in the middle of a war fighting to keep their freedom and that was more important. But the next morning, the French Republican Guard marching band arrived in front of Gen. John J. Pershing’s residence in Paris with a cheering crowd. Pershing came to a window when he heard the Star Spangled Banner as the crowd removed their hats and held their hearts in respect for him. 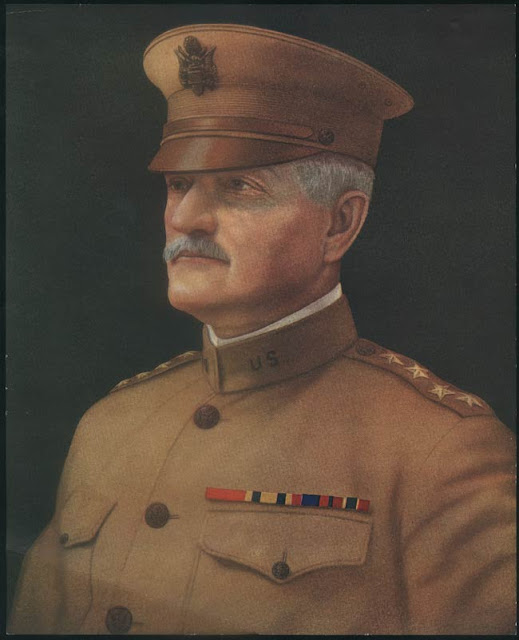 “They had such faith we came to rescue them. How could we let them down? ”
– General Pershing

Pershing and the 16th Infantry joined the French battalion and marched to central Paris. President Raymond Poincaré, other dignitaries, along with decedents of American Revolution French officers honored Pershing. This symbol of Franco-American friendship occurred at the very location where Napoleon declared a day of mourning for the passing of George Washington. Pershing said, “I do not recall any occasion as significant as this that ever showed the French’s affection for America.”

Thousands of Parisians had lined the parade route to cheer as the American soldiers marched by. They waved American flags in honor of the American’s Independence. Others joined their march as they crossed the Seine. As they approached, the Bastille women pushed into the ranks walking arm in arm with the U.S. soldiers. They gave flowers to our soldiers and sang our national anthem. Pershing said, “That was a very special day, we brought a sense of hope to the fatigued Parisians.”

Ben Franklin said, “A man cannot defend his own liberty if he fails to defend his neighbor’s also.” The French came to our aide during the Revolutionary War, and now we had entered WWI to aide them. They in turn showed their gratitude to us by celebrating the greatest day in American history.

In recognition of his role in aiding the American cause, an American flag has flown over Lafayette’s grave since the end of WWI. The flag is changed every July 4 in a highly orchestrated ceremony attended by French and American dignitaries, including representatives of the U.S. Embassy, the French Senate, the Mayor’s Office of the 12th Arrondissement, the Society of American Friends of Lafayette, the Sons of the American Revolution in France, and the Society of Cincinnati in France.

The French showed the love and respect they had for America that day. We can only hope our own citizens do the same this July 4th for the blessings she has given us. Franklin convinced the French that the American Dream was the same as their Dream and they helped obtain that Dream for America. How can anyone disrespect America or her love for us?

"God grant that not only the love of liberty but a thorough knowledge of the rights of man may pervade all the nations of the earth, so that a philosopher may set his foot anywhere on its surface and say: This is my country."
– Ben Franklin