The devil stayed in Georgia when Charlie Daniels went to heaven 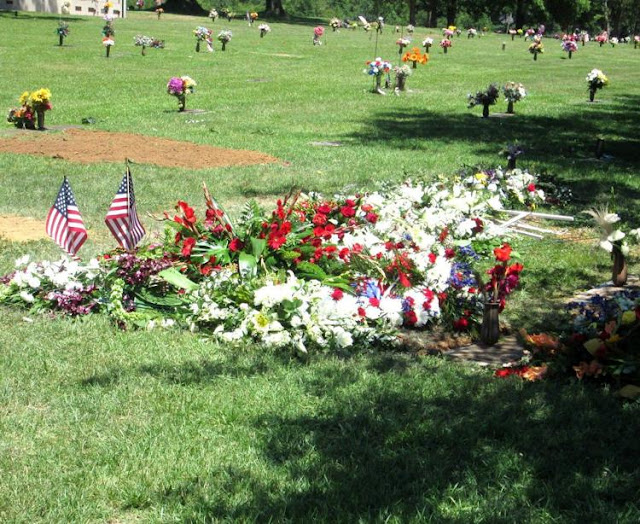 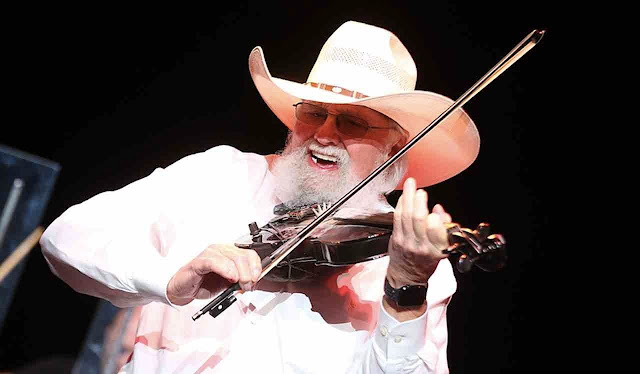 “Only two things protect America, the grace of Almighty God and the United States Military. It will always be that way as long as America remains a free and sovereign nation.”
– Charlie Daniels 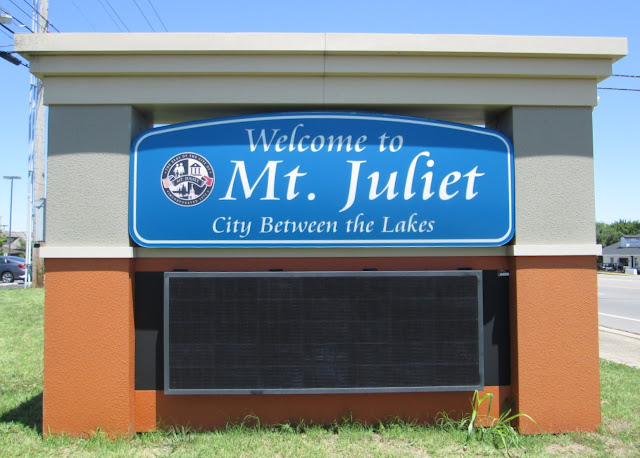 The small town of Mt. Juliet, Tennessee, a haven for country music singers, musicians, performers, artists and writers has been in the news too much lately. When a killer tornado in March 2020 blew through our storybook suburb, this southern Shangri-la was put on national display. Mt. Juliet was no longer a quaint upscale bedroom hamlet for Nashville’s famed Music Row recording artists. The pride of Music City and Dixie’s Bible Belt was now making headlines for its unanticipated tragedies.

Just two days after the streets of Mt. Juliet were filled with patriotic men, women and children who celebrated the greatest day in American history, July 4th, Mt. Juliet’s heart was broken again. On the morning of July 6, 2020, in Hermitage, Tennessee, our most prodigious patriotic and loved citizen, Charlie Daniels, passed away after a massive stroke. Unlike the devil’s breath that ripped Mt. Juliet apart, the city will never fully recover from losing the man who loved America greater than life itself.

It would take a book longer than “War and Peace” for this guitar-picking Nashville transplant from Hollywood to eulogize Charlie Daniels, one of America’s most valued patriots and adored citizens. He was more than just a great Nashville country artist; he was a spokesman for American freedom, liberty and patriotism. And Charlie didn’t need his violin to pontificate his message across America. 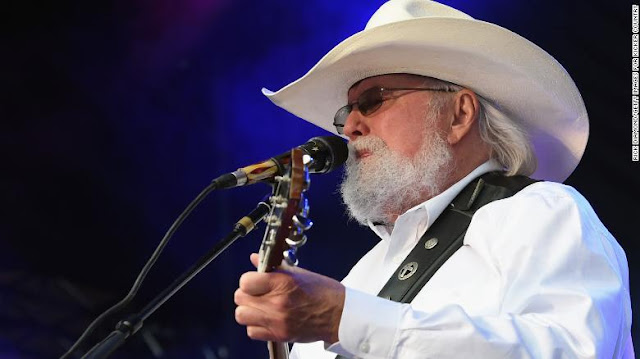 Charlie Daniels is one of the most accomplished signer-songwriters in U.S. history. Charlie played with Marty Robbins, Claude King, Flatt & Scruggs, Pete Seeger, Leonard Cohen, Al Kooper, Ringo Starr and with Bob Dylan on six albums. He won 6 BMI Country Music Awards beginning in 1976 for "The South's Gonna Do It Again." In 2008, Charlie was asked to join the Grand Ole Opry. And in 2016, Charlie Daniels was unanimously inducted into Nashville’s Country Music Hall of Fame.

For those of us who were honored being Charlie’s neighbors, we thought of Charlie each time we reached the fork in the road at Central Pike and admired his slate wall covered with colorful tributes to American veterans. When we voted at Charlie Daniels Park we drove by the statue erected in his honor for the park he funded.

“We want everyone to know who made it possible.”
– Rocky Lee 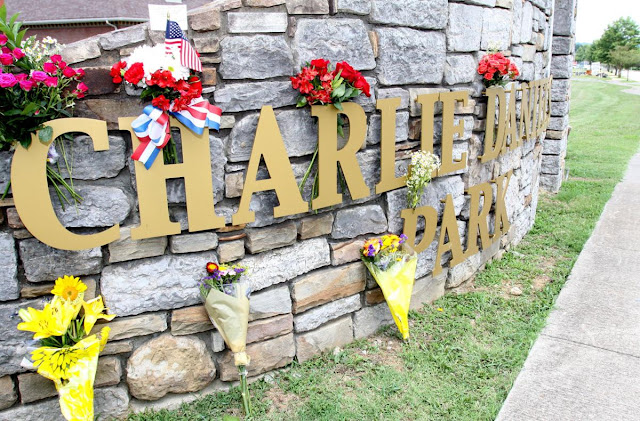 It was not uncommon to see Charlie at the local home center, or hear him speaking at high school graduations or local church services. He sat in the bleachers at little league and high school games and other events. In 2009, when invited to give the opening speech at the Wilson County Tea Party at Charlie Daniels Park, due to a last minute schedule change he recorded it instead. He said, “I’m proud ya’all are here today and are ready to protect and defend what America means to all of us.” 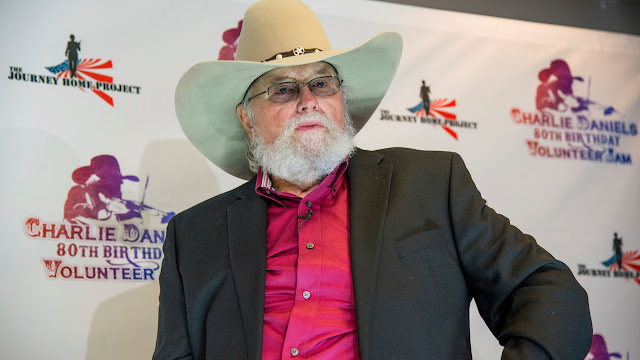 Charlie Daniels raised millions for veterans' groups. He founded the Charlie Daniels Veterans and Military Family Center at Middle Tennessee State University to help veterans train for new careers. MTSU President Sidney McPhee said, "Charlie’s love of life and country was radiant and inspiring. He will live on, not only for his music, but for the tremendous generosity he showed to many of us.”

Charlie shined the light on the many causes dear to his heart. He had compassion for disabled veterans and their families and put on shows for them around the nation. He founded the Journey Home Project in 2014, to help those who needed help the most. Charlie’s Band performed their first “Volunteer Jam” in 1974 at the War Memorial Auditorium in Nashville, now an annual event.

For a man of his entertainment industry stature, he was thoughtful, unselfish and humble – except when it came to politics. Whether or not you agree with Charlie’s conservative views, one thing that can’t be questioned is his passion that American democracy comes first and his belief that every politician is obligated to do what is best for America and Americans, not some far off foreign nation.

“I just thank God I can make a living while doing so much for the country I love.”
– Charlie Daniels

Charlie frequently reflected the frustrations of Americans who felt that the east and west “coastal elite” politicians were moving the country farther away from its core traditions and its values. Many politically savvy country fans believe his song “Simple Man” captures his sense of his socio-political frustrations.

“I ain't nothin' but a simple man, they call me a redneck, I reckon I am. There's things going on that make me mad down to the core. I'm madder'n hell and ain't gonna take it no more.”

Although Charlie never officially endorsed any politician, country stations began replaying “Simple Man” just before the last presidential election. And many of his fans believed it was because he expressed what so many principled patriotic Americans did at the time. Charlie’s words reflected the very feelings Americans shared who voted for Donald Trump “to make America great again.”

Charlie Daniels was never timid when expressing his political beliefs and the last few weeks were no exception. He recently said, “It’s time for America to stop the rancor and division and get things together. It’s time America moved forward and put aside our differences and heal our wounds. We waste too much energy and political capital and don’t get anything done paying too much attention to political correctness and things that don’t mean anything. It is time we stop chasing rainbows.”

Charlie’s final TV interview summed up his beliefs. “Democrats and media don’t understand. Those of us who support the president don’t have hate in our hearts. We have deeply held beliefs in what is wrong and right. These aren’t shaped by the media, but what we learn from our parents, pastors and Bibles. Our call for law and order isn’t a threat, but a desire to protect the innocent from harm.”

Charlie was an outspoken conservative who constantly tweeted his support for Trump and disdain of his detractors. Charlie surly appreciated Trump's last tweet. President Trump said, "We will miss Charlie Daniels who passed away yesterday in Hermitage, Tennessee. Charlie was a great country and rock star as well as a patriot. My condolences to his wife Hazel, and their family. He is in our thoughts and prayers tonight. I love Charlie and his music!" Donald Trump, #RIPCharlieDaniels. 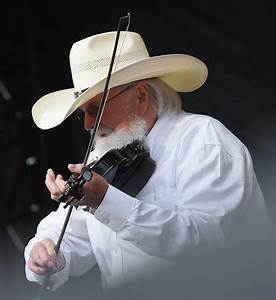 Those of us who knew Charlie can picture St. Peter handing him a fiddle saying, "Now play us that song again that beat the devil. We all love it up here!" Charlie was a pop music icon, a deeply religious man, and generous to a fault.

To Mt. Juliet, Charlie was a neighbor, a friend and a favorite son. He was the perennial root and nucleus of our community. He was not only our favorite citizen, he was America’s favorite citizen. Above all, Charlie loved America and was its greatest patriot! 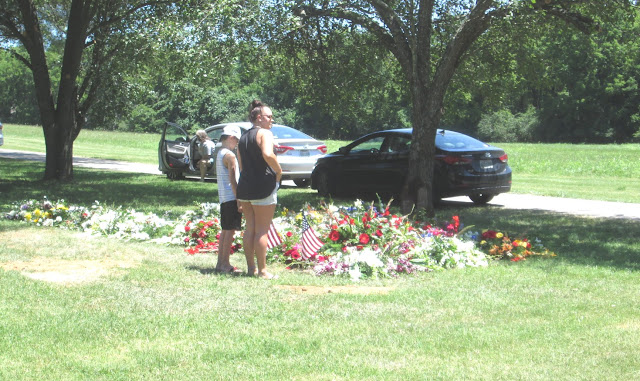 Charlie’s America was the real America.

“I love my country. I love my guns. I love my family. I love the way it is now, and anybody that tries to change it has to come through me. That should be all of our attitudes. Cause this is America! As a country boy it is good enough for me.”
– Charlie Daniels 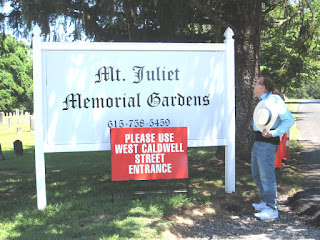 Photo: William Haupt III at the entrance to the Mt. Juliet Memorial Gardens where the late great Charlie Daniels is buried.